So, Kendall Jenner casually hopped on Instagram over the weekend for a quick photo dump, which included a super cute mirror selfie of her and Devin Booker. And um, everyone in the comments is fully spiraling due to Devin wearing what looks to be a gold wedding band on his ring finger:

Obviously, the comments on this post are just all: “Anyone else notice the ring on his hand?” and “He’s wearing a wedding ring?” and “I see a ring on that finger.” And there’s also a lot of speculation that Kendall is hiding her hand to cover her ring, which seems unlikely considering Devin didn’t bother to cover his, but okay! 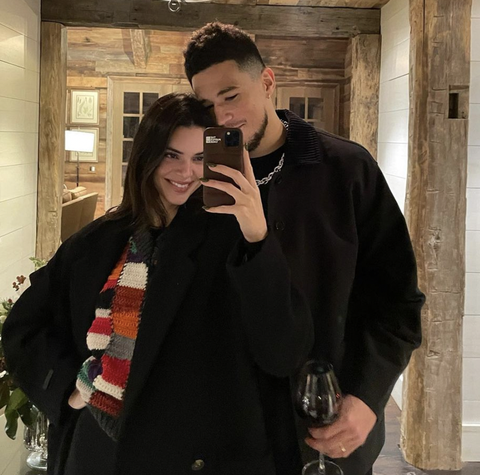 Neither Kendall nor Devin have responded to the internet’s spiraling, but a source opened up about the couples’ close relationship to E! News last year, saying “they are crazy about each other” and that “she didn’t expect this, but it’s become the healthiest and best relationship she has ever been in. She definitely feels like this is different and more serious.”

Meanwhile, the Kardashians seem fully obsessed with Devin: “Her family loves him and knows how good they are for one another. They love having Devin around and have welcomed him with open arms. They love seeing Kendall so happy with someone who brings out the best in her. It’s exciting for everyone to see her in such a great relationship.”

Anyway, is now a good time to remind everyone that Kendall once pretended she’d gotten engaged to Devin as a prank? Memories: