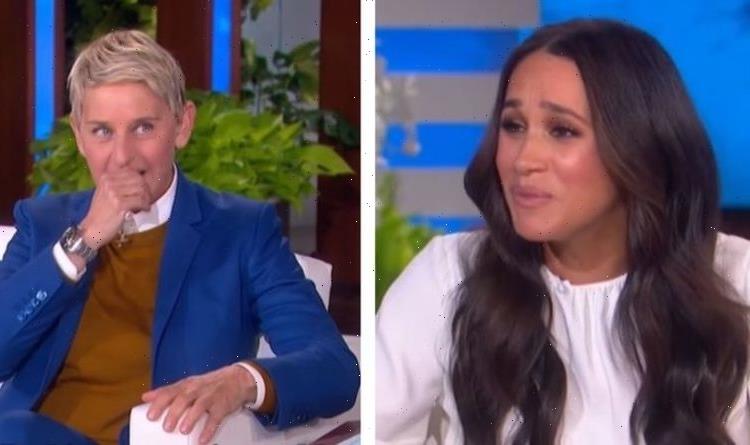 Meghan Markle talks to Ellen about her old broken car

You auditioned that often that they knew you, to say ‘Break a leg?’

She said: “A lot has changed.”

“You said the last talk show you did was a decade ago,” Ellen recalled, “but you used to come to [the Warner Brothers lot] to audition all the time.”

“Oh my gosh, completely!” Meghan agreed, sweeping her hair from her face while looking slightly embarrassed.

“I would park at gate three and then I would scoot on over.

“What was so nice is the security guards would always say: ‘Break a leg, we hope you get it!'”

“So to drive in today was very different!”

“But you auditioned that often that they knew you, to say ‘Break a leg?'” questioned Ellen, in what some Twitter users instantly interpreted as a thinly-veiled jibe, mocking Meghan’s acting prowess.

One Twitter user, Emma, jokingly responded to the moment: “Did no one else notice the burn? ‘You auditioned so often that the security guards who start wishing you luck?’”

Fortunately, Meghan seemed unfazed as she laughed off the comedian’s remark: “I think they probably said it to everyone – that’s how nice they were!”

Meghan went on to recall her humble beginnings as an actress, and while she and Harry are now the ultimate Hollywood power couple, her method of transportation before she met the prince was much less glamorous.

“I had a very, very old Ford Explorer Sport,” she confessed, “and at a certain point, the key stopped working on the driver’s side, so you couldn’t get yourself through the door.

“After auditions, I would park at the back of the parking lot and I would open the trunk and climb in, and then pull it shut behind me!” she laughed.

She would also “crawl all over” the seats each time she wanted to get out – an awkward experience that was a far cry from the shiny sports cars and limousines with blacked out windows she has had access to since.

The red-faced aspiring star would “play it off” if anyone saw her less than ladylike clambering episodes in and out of the Ford, as she used to tell onlookers: “Oh, I’m just looking for my resume and my highlighters for my script – oh, maybe it’s back there!”

“A lot has changed since the last time Meghan, The Duchess of Sussex, was on the Warner Brothers lot,” Ellen tweeted today.

Posting a short video excerpt of the pair’s chat, she urged fans to check in tomorrow and not to miss the rest of the highly anticipated interview.

The Duchess of Sussex recently claimed to have “forgotten” that she had forwarded private information to her publicist to send to the authors of the biography Finding Freedom.

Some celebrities, most notably Piers Morgan, have accused her of lying about the hardship she claims to have experienced in the Royal Family.

It has also been argued that her latest admission in court diminishes her credibility.

While her court case continues, Meghan fans and royalists alike will surely look forward to tomorrow’s instalment of The Ellen DeGeneres Show.