Sofia Richie has a new man in her life, folks! In case ya haven’t heard, Sofia’s all boo’d up at the moment with a really hot dude named Elliot Grainge. Even though their relationship is brand spankin’ new, things between Elliot and Sofia seem to progressing rather quickly…which means it’s time to dissect every single detail of Elliot’s life, of course.

Since you don’t have anything better to do at the moment (and probs wanna see if Elliot’s as cute as everyone’s reporting, LOL) please read on for the intel you so desperately crave!

Elliot is a music executive at an independent record label.

He’s the founder and CEO of 10K Projects, an indie record label based in Los Angeles that’s helped artists like Trippie Redd and Tekashi 6ix9ine (and others!) get their careers off the ground.

His dad is a BFD.

After witnessing his dad’s work firsthand, Elliot quickly became obsessed with learning the ins and outs of the music industry. “I was a weird kid who used to read the music trades,” he told Variety. “What I noticed about my father’s negotiating style was how transparent, honest and sensible he was. When you put your cards on the table like that, negotiating is less competitive and more about teamwork. How can we get this done together, so that everybody is happy?” 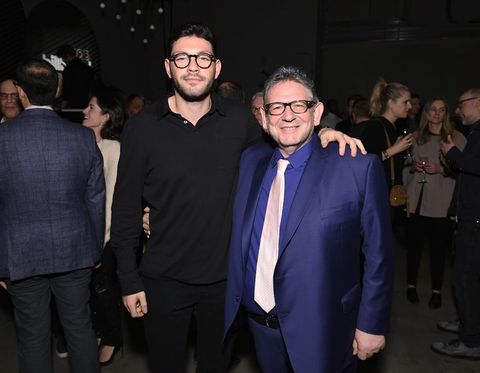 Some other random facts about Elliot’s dad—he’s casually referred to as Sir Lucian Charles Grainge, CBE, meaning that he’s been awarded The Most Excellent Order of the British Empire for his contributions to the arts and sciences! Elliot’s dad is also p good friends with Simon Cowell, and used to have him over on weekends while he was living in England.

Elliot grew up in England, and later moved to the United States in 2009 after his father became the CEO of Universal Music Group. He attended Northeastern University in Boston, Massachusetts.

Sofia’s family approves of him.

When Entertainment Tonight first reported that Elliot and Sofia were dating, the outlet explained that they “have been friends for years and Elliot is also close with Sofia’s brother, Miles. It’s very nice for Sofia to date someone who her family approves of and likes.”

He and Sofia are getting pretty serious.

While ET initially said that Sofia and Elliot are “happy together and having fun,” an Us Weekly course is saying it’s a biiiiit more than that now. “They started out as friends before they became a couple, and are now getting serious,” an insider told the outlet. “Their relationship took off and they have been getting closer and closer and spend practically every day together.”

He’s a got a chill personality!

Elliot’s a “super sweet and a really cool guy” who enjoys being more of “a private person,” which Sofia really digs. “She loves that he’s low-key and isn’t someone who craves the spotlight. They like to be homebodies but also enjoy going out together,” Us Weekly‘s source added.