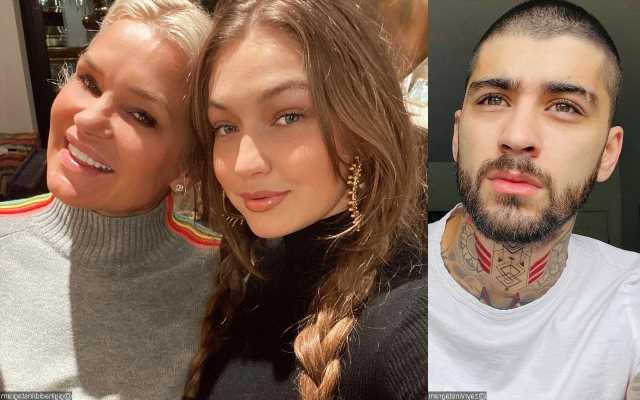 The former One Direction member is reportedly ‘sobbing’ on the phone while asking his ex-girlfriend to take him back and insisting that the altercation ‘was an isolated incident.’

AceShowbiz –Zayn Malik apparently wants to keep close with Gigi Hadid and their daughter Khai. After their split following an alleged physical altercation with Yolanda Hadid, the former One Direction star is reportedly “begging” his ex to take him back.

“He’s been begging and sobbing on the phone, insisting that it was an isolated incident,” a source close to the 28-year-old singer told OK! Magazine. The source added, “Gigi is upset and shell-shocked but does believe he’s sorry, which has Yolanda terrified that she’ll take him back.”

Offering more details, the informant shared that “The Real Housewives of Beverly Hills” alum wants to keep distance between Zayn and Gigi as well as 14-month-old Khai. The insider spilled, “Yolanda is getting legal advice on how to keep Zayn away from her daughter and granddaughter for good.”

“She’s always taken issue with his temper and says he’s a dark, troubled character who Gigi should never have gotten involved with in the first place,” the source concluded. Despite Yolanda’s wishes to get rid of Zayn, who pleaded no contest to four charges of harassment, from the Hadid family, it’s reported that Gigi “made it clear” that although the two had called it quits, he will still be a part of Khai’s life.

“Gigi will do everything she can to make sure [she and Zayn] co-parent in a civil way,” a separate source close to the Hadid family informed the publication. “Yolanda is very upset with Zayn, but Gigi has made it clear that her daughter needs her dad.” Previously, it’s also reported that they want to co-parent their daughter in a “peaceful” environment.

While Zayn wants to come back home with Gigi, his mother Trisha has been urging him to return to his home in Bradford. “Zayn is having a hard time right now and his family just want him to return home to Bradford,” an insider shared. “For Zayn’s mum, she is having to watch her son struggle thousands of miles away and it is really difficult for her.”

“A mother’s instinct is to protect her child and that is all she wants for Zayn,” the informant further explained. “They are hopeful he will be able to come home at some point so they can spend time with him.”

The drama began after Zayn allegedly called Yolanda a “f**king Dutch s*ut” and ordered her to “stay away from [his] f**king daughter” in September during a heated argument at the home, which he used to share with his ex-girlfriend in Pennsylvania. The alleged incident happened after Yolanda came to visit her granddaughter Khai “without calling beforehand or even knocking at the door.”