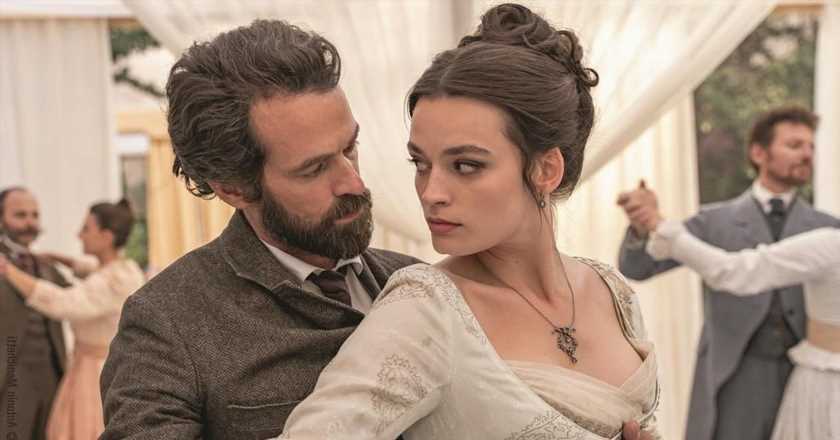 In the world of cinema, these are the recent movie announcements that have us all giddy with anticipation.

So allow us to home in on some of the best and most exciting ones. We’re talking everything from thrillers, sci-fi romances and new roles from the likes of Sex Education’s Emma Mackey, Kit Harington and even an on-screen reunion with Olivia Colman and Jessie Buckley.

With that, here are the six films that are firmly at the top of our film radar.

Halle Berry will be starring in upcoming thriller Motherland.

Just as we’re gearing up for a new season of Netflix’s Stranger Things, it looks like the team behind the smash hit series is bringing us a Halle Berry-led thriller.

While we don’t currently know much more about the casting or the more intricate details of the film, we do know that The Hills Have Eyes and Piranha 3D filmmaker Alexandre Aja is aboard to direct the feature. According to Variety, the upcoming feature will chart “the story of a mother and her twin sons who have been tormented by an evil spirit for years.

“When one of the boys questions whether the evil is real, the family’s sacred bond is broken, and it becomes a fight for survival.”

The film is expected to go into production next year, and trust us, we’ll be counting down the days till we know more.

Olivia Colman will be back on the big screen with Jessie Buckley in Wicked Little Letters.

If you caught Netflix’s The Lost Daughter – and if you haven’t, feel free to stream it immediately – then you’ll be brimming with excitement for this on-screen reunion of Olivia Colman and Jessie Buckley.

This time around, they’re bringing their talents to a comedy, which is already being buzzed about at Cannes. It’s being produced by French powerhouse Studiocanal alongside Colman’s own company, South Of The River Pictures.

According to Deadline, the upcoming film is based on a true story and will see the in-demand Brit and Irish actors play very different neighbours who come together to solve a mystery.

In terms of their upcoming roles, we’re more than a little excited. Buckley will be playing fiery Rose Gooding who “has little in common with the pious Edith Swan (Colman), aside from them being neighbours in the seaside town of Littlehampton in the 1920s.

“One day, Edith and others in the town start receiving scandalous letters written with foul language as eccentric as it is obscene, and the finger of suspicion immediately falls on Rose. As Rose stands to lose her freedom and the custody of her daughter, and outrageous letters continue to blight the town, police officer Gladys Moss begins to suspect something is amiss. Together with a group of resourceful women, Gladys endeavours to solve the mystery, liberate Rose and catch the real culprit.”

We’re already excited about catching Buckley on the big screen in Men, but this new project is already shaping up to be the kind of divine comedy that’ll resonate with viewers.

The Lost Daughter: at the heart of Maggie Gyllenhaal’s psychodrama is the battle between good and evil

Riz Ahmed will be starring alongside Jessie Buckley in sci-fi romance Fingernails.

Their joint-lead casting has just been announced, but if two names were to ever get us excited for a romantic film, it would definitely be these two.

Cate Blanchett’s production company, Dirty Films, will also be behind the project, which sounds like it could be an episode of Black Mirror.

According to Deadline, this is set to be a surreal drama and a “grounded sci-fi love story”. In the film, a test has been discovered that measures whether couples are truly in love. And so, to help couples succeed, love institutes have opened to help guide them. “Anna (Buckley) is sceptical of the positive result she’s received with her longtime partner, so she starts working in a love institute as an assistant to Trevor (Ahmed), a mysterious, dedicated instructor,” the synopsis reads.

It seems like both an in-depth exploration of society’s never-ending search for love, but also a playful take on the romantic drama genre. Either way, we’re totally here for it.

It seems like the cast of Netflix’s Sex Education are all up to fun things right now, with Emma Mackey the latest to take centre stage in an upcoming movie which we’re waiting for with bated breath. Due for release on 5 August, this moody French romantic epic has all the makings of a glorious film.

It’s about the story behind the Eiffel Tower, and according to the synopsis: “Having just finished the Statue of Liberty, Gustave Eiffel is at the peak of his career.” Everything changes the day he crosses paths with Adrienne Bourgès (Mackey) and their forbidden relationship inspires him to change the Paris skyline forever.

Give us a period drama with a gritty plotline at its core any day but when Kit Harington and Clara Rugaard have just been confirmed to lead it? Even more so.

As reported by Deadline, the new film will chronicle the life of Frankenstein scribe Mary Shelley.

The period film, which will have a contemporary sheen to it, will deal with Mary’s mental struggle to write her seminal novel. Rising Danish actor Rugaard will play Mary Shelley and Harington will be ‘the monster’.

The film’s official synopsis reads: “Mary is seduced by her own inner monster catapulting her into a dangerous, destructive psychological romance. Realising the monster is inextricably linked to her own mental state, her only route to salvation is in bringing him to life.”

2022 film guide: these are the best new movies to get excited about

Jacob Elordi will be starring in Saltburn, alongside Rosamund Pike and Barry Keoghan.

You know when you see a list of names that you didn’t expect to see in one film, but somehow, it just works? Well the news of Saltburn is a little like that.

Jacob Elordi (Euphoria), and Barry Keoghan (The Batman) have just been confirmed to star in the upcoming film alongside Rosamund Pike, which is set to begin production this year.

So far, not much is known about the film apart from the fact it will be a “story of obsession”, while other plot details are bing kept firmly under wraps. The film will be produced by Emerald Fennell (The Crown) and LuckyChap Entertainment’s Josey McNamara, Tom Ackerley and Margot Robbie.

But if there’s one thing we know, it’s that Elordi and Keoghan’s recent performances – as Nate in HBO’s Euphoria and The Joker respectively – paint a very good picture of the kind of engaging role they’ll be bringing to the upcoming movie. And lest we forget how chillingly convincing Pike is in Gone Girl and I Care A Lot, you just know that this is a movie we absolutely cannot wait for.