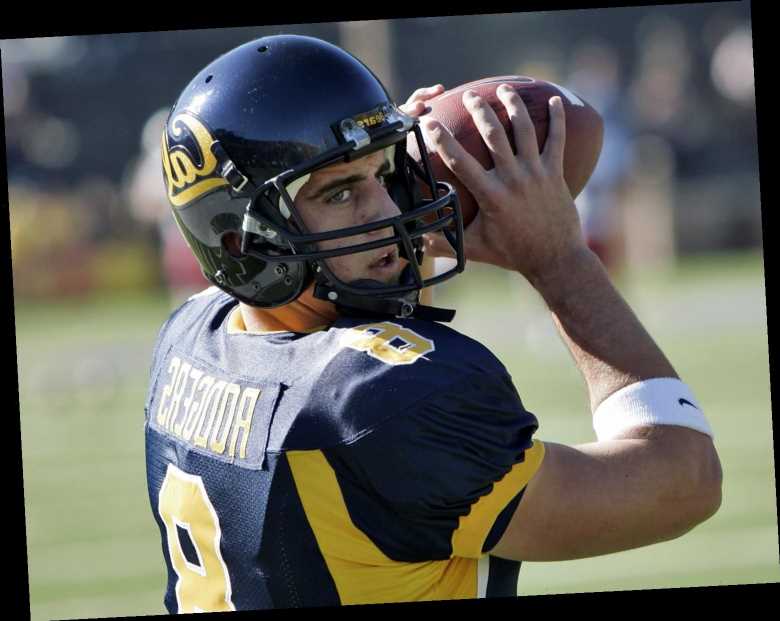 Aaron Rodgers began his football career at Butte Community College in Oroville, California, not far from his hometown of Chico. A natural athlete, he succeeded in high school sports but didn’t catch the attention of college recruiters until he began at Butte in 2002. His impressive first season at Butte put him on the radar of the coaches at the University of California-Berkeley, however, and he transferred sophomore year, leading the Cal Golden Bears in two winning seasons. A cherry on top of his time at Cal was being named Most Outstanding Offensive Player of the 2003 Insight Bowl (right). He left after two seasons, deciding to forgo senior year in favor of going pro. During the early days of the coronavirus pandemic, Rodgers threw it back to the time he was “quarantined” in the green room at N.Y.C.’s Javits Center during the draft. “Turned out pretty good I’d say,” he wrote. Rodgers was, of course, ultimately drafted by the Green Bay Packers. Though he was expected to possibly be the first pick of the draft — potentially by his beloved San Francisco 49ers — he wasn’t picked by Green Bay until the 24th round.

After three seasons as backup quarterback to Brett Favre, Rodgers officially became a starter in 2008 — and the rest is history.

While he’s played for Green Bay his whole career, he told fans during a 2019 Reddit AMA that he’s “still working” on adjusting to the chilly northern Wisconsin weather. In his Reddit AMA, the majorly successful star said the key to staying strong mentally during the football season is balance. “Can’t ride the rollercoaster of the weekly ups and downs in this business,” he said. “Gotta have the balance off the field so that you can give your entire focus to your job when it’s time to work.” When asked about life after football in his Reddit AMA, Rodgers had this to say about retirement: “I don’t see myself doing any broadcasting. I love the sport but when I’m done I’ll be done. Maybe help out some local high school QBs, that would be fun.”

He also said he’d received advice from former players on an eventual life without the sport. “The key I believe is to find things that can fill that competitive void, and to make sure that you are intentional about spending time with your former teammates,” he shared. “That’s what I hear from the guys that have retired, they miss the camaraderie, and I’m sure that I will too.”