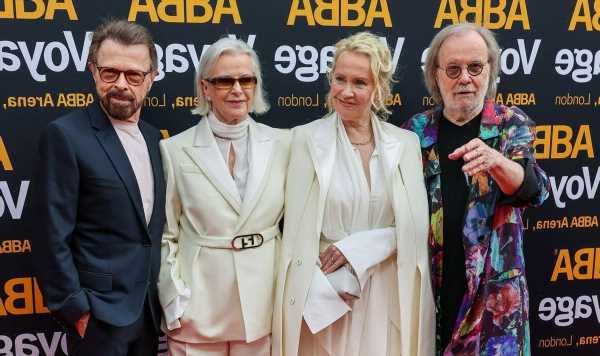 The highly-anticipated ABBA Voyage gigs kicked off in London last night with the premiere of the virtual concert featuring the ABBA-tars. During the shows, the Swedish quartet appear on a 65 million pixel screen to perform a pre-recorded live gig that will defy expectation, according to some critics.

See one of the world’s most iconic pop groups perform with the new ABBA Voyage Tour.

This box contains affiliate links, we may receive a commission on any sales we generate from it. Learn more.

He added in his five-star review: “It’s almost impossible to tell you’re not watching human beings: occasionally, there’s a hint of video game uncanny valley about the projections on the giant screens either side of the stage, but your attention is continually drawn to the human-sized avatars.”

The Evening Standard’s David Smyth agreed with this sentiment.

His five-star review read: “This bears overstating: I literally could not believe my eyes.”

Smyth added that the ABBA-tars were “astonishingly real” – despite the fact they were on a 2D screen.

Not every review of the concert was positive, however.

The Times’ critic Will Hodgkinson said the “real thing is still best” when it comes to ABBA’s performances.

He went on to call the performances delivered by the ABBA-tars “synthetic”.

ABBA: New tour will be created from CGI characters of band

He continued: “It was weird, seeing phantasmagorical figures going through the motions, and a sequence of the four in neon catsuits was just too synthetic. Voulez-Vous didn’t need the fantasy cartoon of some kid it came with either.”

The BBC praised the show as well but noted that some crucial tracks were missing from the band’s setlist, however.

ABBA have released nine studio albums over the past 40 years, so there were, unfortunately, some hits left out of the enormous show – including some iconic songs that fans will certainly want to hear.

The Name of the Game is missing from the set, and so too are Super Trouper and Money Money Money.

But they did play some of their biggest tracks, as well.

ABBA played such hits as The Winner Takes It All, SOS, Voulez-Vous and Knowing Me, Knowing You, to name but a few.

The band themselves were in attendance and made a special appearance as the show came to a close.

Frida was ecstatic on the show’s red carpet. “I dreamed of this for years,” she said. “We love our music, we love to sing.”

Agnetha Fältskog also praised the band’s return, adding: “ABBA has never left us, in my heart. It was not such a difficult decision [to reunite] because the music is part of us.”

Benny Andersson previously said of the shows: “Being able to be on stage and perform for an hour or two, while being home walking the dog or making a carbonara? That’s how it all started. We were intrigued by that.”

Bjorn Ulvaeus agreed: “And the vision of creating something spectacular which no-one had ever seen before. I think, after we open [this show] there might be one or two who want to do the same, while they’re still alive.”

Tickets for ABBA Voyage are out now.