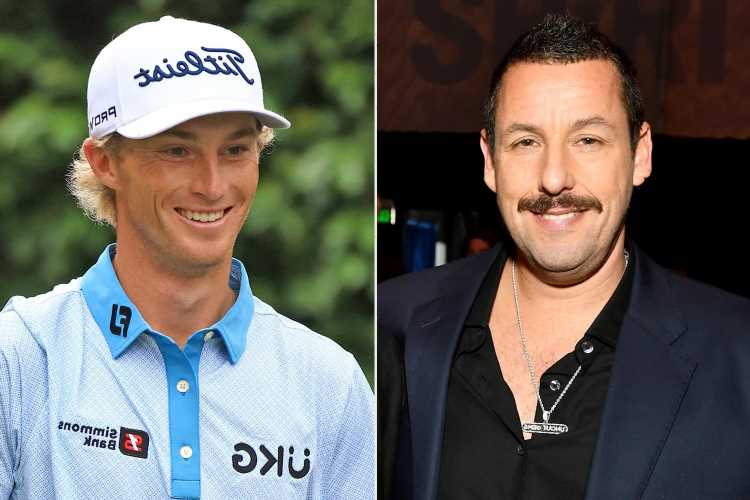 Golfer Will Zalatoris had a very special fan cheering him on during the 2021 Masters Tournament: Happy Gilmore!

Adam Sandler, who starred as the titular character in the golf comedy Happy Gilmore, wished Zalatoris, 24, luck on Sunday, pointing out on Instagram that the golfer resembles Happy's caddie from the 1996 movie.

The actor, 54, posted a side-by-side photo of Zalatoris and Jared Van Snellenberg, who played the young caddie in the film, highlighting the similarities between the two. Snellenberg and Zalatoris both share similar facial features and, in the film, the former had wavy blonde hair like the golfer's.

"Have fun today young man. Mr. Gilmore is watching you and very proud," Sandler captioned the post, which came ahead of Sunday's final round.

Sandler isn't the first one to point out the resemblance between the two men.

Zalatoris, who fell behind Masters winner Hideki Matsuyama to secure second place in Sunday's tournament, has previously embraced the Happy Gilmore comparison, even getting a quote from the film engraved on one of his golf clubs.

The golfer revealed in a video that he has the quote "Mr. Gilmore, I'm your caddy" written on his lob wedge.

In the film, Snellenberg says this line when Gilmore accuses him of stealing his golf clubs during one of his first tournaments.

Matsuyama, 29, won the 2021 Masters at Augusta National in Georgia this weekend, finishing the tournament at 10 under. It marks the first Masters victory for Matsuyama, and the first time a Japanese player has won a PGA Tour major.

Matsuyama took the lead early, as many presumed frontrunners fell behind — including most recent Masters winner Dustin Johnson, who failed to make the weekend cut to defend his title.

The Japanese golfer was followed by Zalatoris, -9, and Jordan Spieth and Xander Schauffele, who shared third place with -7.

Johnson latetr presented Matsuyama with his jacket during a ceremony Sunday.