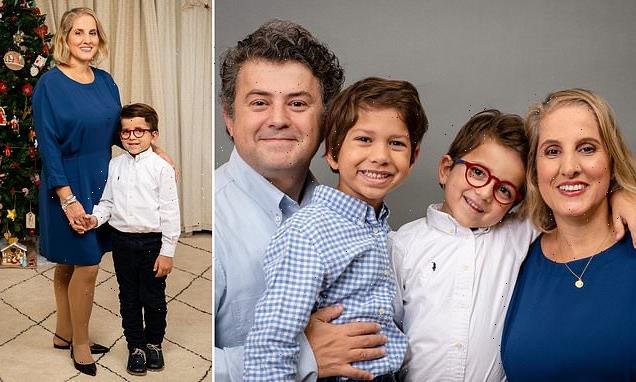 Afonso’s illness has brought the twins so close, they even share a bed again: When one of Susana’s sons was diagnosed with leukaemia, he was able to draw on a unique bond

Perhaps it’s unsurprising that six-year-old twins Afonso and Gabriel are close. But there is an extra dimension to their bond.

Gabriel assumes a protective role, keeping a watchful eye on his brother. If Afonso becomes withdrawn at school, Gabriel keeps him company. At night, they’ve started sleeping together like they did as babies in their cot.

‘When Afonso is down, Gabriel is able to cheer him up better than anyone else,’ says their mother, Susana de Salazar Casanova, from Richmond, South-West London. ‘He cuddles Afonso all the time, which is lovely to see, but also a reminder of everything they’ve been through.’

The boys were only three when Afonso was diagnosed with acute lymphoblastic leukaemia. Gabriel was too young to fully understand why his brother kept disappearing. Now, after two-and-a-half years of ongoing treatment, you’d never guess the challenges they’ve both faced. 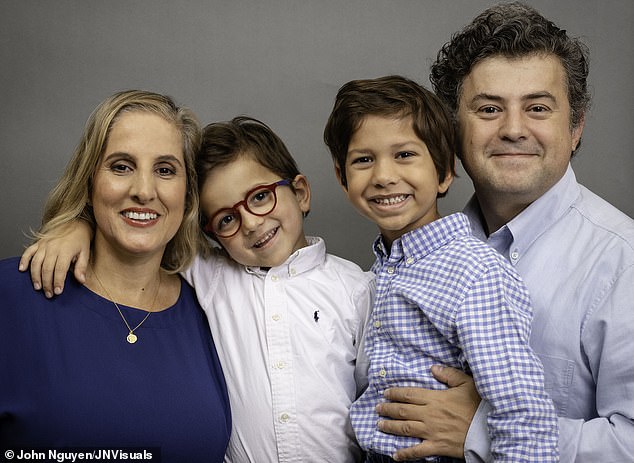 Susana Casanova, her husband Paulo Casanova with sons Afonso (red glasses) and Gabriel. Afonso was diagnosed with leukaemia in May 2020 and now Susana is a campaigner for Kids with Cancer

‘Afonso is a bit pale but he’s doing really well,’ says Susana, 51, a full-time mum. ‘He is very clever and loves maths. He swims, and plays golf and tennis. He wants to go everywhere — Iceland, Japan, the Maldives and New York. We’ve promised him a trip to the Maldives when all this is over.’

For now, the family are simply grateful they can enjoy Christmas together and look ahead to 2023, which should spell the end of this frightening period in their lives.

Afonso continues to endure daily chemotherapy tablets, weekly blood tests and trips to hospital for his monthly steroids and three-monthly lumbar punctures. But by next July, doctors hope he’ll be able to end his treatment and lead a normal life.

Susana is supporting the Mail’s campaign, in partnership with Cancer Research UK, to push for more investment in children’s and young people’s cancer. We are asking readers to donate in support of the crucial work being done to change so many lives.

It was in May 2020 that the family’s world turned upside down. Susana knew something was seriously wrong when three doctors walked into the hospital room where she was sitting with her little boy, who had just had blood tests. When she heard the word ‘leukaemia’, she went into shock.

‘I started screaming, convinced he was going to die,’ she says. ‘Afonso was on my knee and I was hugging him so tightly, he kept saying: “Mummy, you’re hurting me!” 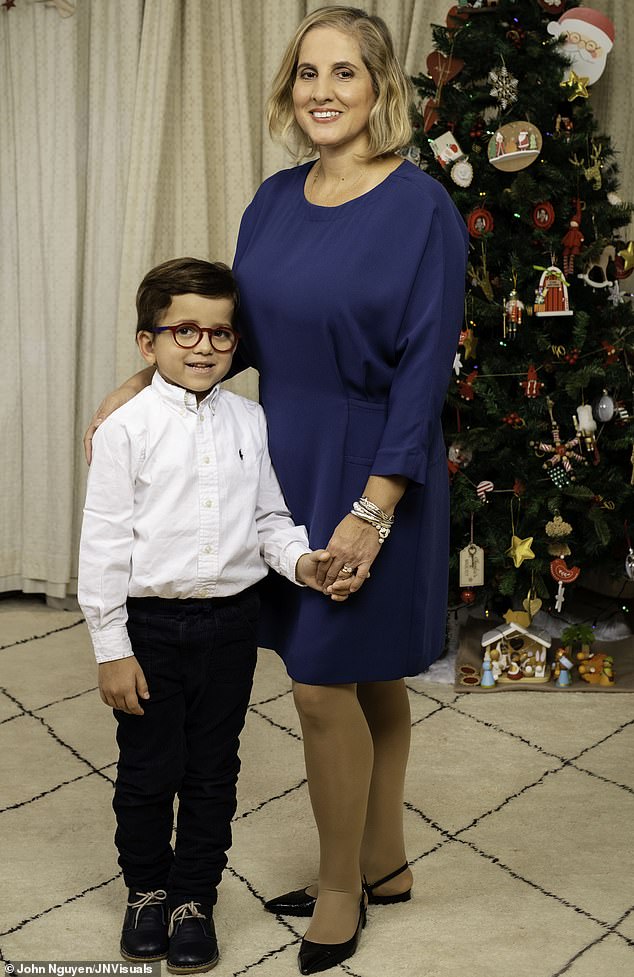 Susana explains Afonso’s journey and how his twin brother Gabriel now looks after him, and how the pair share a very special bond

‘My husband Paulo actually started to laugh. It sounds strange but he was in a state of total disbelief and shock.’

Susana sought medical help after Afonso began to lack energy and look pale. ‘On our daily walk, Afonso wasn’t scooting as energetically as his brother and he was napping in the afternoon, something he hadn’t done since he was a toddler. He wasn’t sleeping well and was waking up sweating. I wasn’t aware this could be a symptom of cancer.’

She phoned 111 when her family, based in Portugal, commented that Afonso ‘didn’t look well’ in photographs. A GP couldn’t find anything wrong and sent Afonso to hospital for further tests.

‘We later discovered Afonso may have died if we had left it even a few more days,’ says Susana. ‘I don’t even like to think about what might have happened.’

Doctors did an X-ray and blood tests and about four hours later, the family received that diagnosis of leukaemia. ‘It was a huge shock. Of course, you think he’s going to die — but one of the first things the oncologist said was: “It’s not a death sentence, it is treatable but it’s going to be three years of treatment”,’ says Susana.

‘Treatment started a couple of hours later and Afonso was given a blood and platelets transfusion. When the doctors had to insert a canula [a tube to administer the transfusion] into the back of his hand, he screamed at me saying: “Mummy, why do you let them hurt me so much?”

‘I will never forget those words. It will haunt me for a very long time. Afterwards they had to insert a small device called a port-a-cath into his body under his arm to administer drugs and he kept crying, saying: “I hate this hotel!”’

Susana and Afonso stayed in hospital for several weeks. Paulo and Gabriel were left to tell friends and family what was happening. Susana’s mother flew over from Portugal and stayed with them for many months to help look after Gabriel while engineer Paulo, 46, went to work.

‘I felt guilty about not being there for Gabriel,’ says Susana. ‘When I saw him five days after the diagnosis, he rejected me when I asked for a cuddle. I didn’t understand at the time, I thought he was cross with me. A psychologist we saw much later explained that Gabriel thought I’d died, which of course makes me feel guilty.’

Of course, Gabriel was too young to express his feelings. ‘I’m sure he missed his brother, but he didn’t articulate it. What came out was jealousy towards Afonso at first — he couldn’t understand why Mummy was spending so much time with Afonso and not him.’

The first eight months of treatment were gruelling. After surgery to insert the port-a-cath, Afonso was transferred to the specialist Royal Marsden for the first of four intensive phases of strong intravenous drugs. ‘He suffered so badly with the side effects and had terrible blisters in his mouth,’ says Susana. ‘At one point he could only eat Babybel cheese and Nutella chocolate spread.

‘He lost all his hair but he was such a strong boy. It was heartbreaking to see him like that and I didn’t know how to deal with it properly. Like any mother, I wanted to do everything to protect him, so I was probably overprotective at first. But we had to learn to live with it because we had years of treatment ahead.’

Afonso was able to start school alongside his brother. However, their lives differ in many ways.

‘Gabriel was always very protective and a very sweet, cuddly boy,’ says Susana. ‘Now, the instant he sees Afonso unwell, he panics and gets very anxious. Afonso must be rushed to hospital every time he has a fever. He frequently feels sick due to chemotherapy and often he struggles to walk to school.

‘One day he fell off his scooter because he lost his strength while riding. But mostly, it has been beneficial to let him jump, climb and run like any other child, even when that makes us, as parents, feel less comfortable. ‘He has been going to school as often as he can and last year managed a 94 per cent attendance rate. The wonderful thing is I know that Gabriel will always be there looking out for him.’

Susana is grateful for the advances in cancer treatment. In the early 1970s, a third of children with leukaemia in the UK survived for five years or more following their diagnosis. Now it’s almost nine in ten. ‘We have to keep looking for answers to help more children like Afonso,’ says Susana.

‘I’ve told them that Santa has many children to get round but all Afonso said was: “Mummy, Santa can do it for all the children because he is Santa!” ’

And quite frankly, if anyone deserves presents this year, it’s these two little boys who have endured so much.