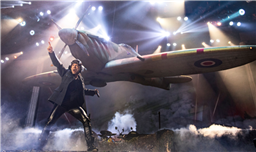 Iron Maiden, the massively influential heavy metal band, is known for their audacious live shows filled with pyrotechnics, choreography and costume changes. But the best special effect on display at the Oct. 19 New York stop of the Legacy of the Beast World Tour was the huge smiles on the band members, who had a hell of a time shredding for fans after nearly 50 years in the business.

The band’s current lineup has been steady since 1999, and decades of playing together add a triumphant flair to live performances of some of the heaviest rock songs ever penned. The group’s three guitar army — Dave Murray, Adrian Smith and Janick Gers — traded off blistering solos, each basking in their signature styles, then weaving into lush multi-part harmonies to add some sweetness to the mix. And while the rhythm section of bassist Steve Harris and drummer Nicko McBrain kept a galloping pace, singer Bruce Dickinson remained the consummate carnival barker, leading the crowd in anthemic singalongs with his jaw-dropping tenor before urging the audience to clap, sway and scream louder at every opportunity.

As the band blazed through intricate fretwork, Dickinson also navigated the bulk of the stagecraft, dressing up in an “Eyes Wide Shut” mask with a lantern for the spooky classic “Fear of the Dark,” donning a flamethrower for stadium shaker “Flight of Icarus” and sparring with a giant version of their mascot Eddie during “The Trooper.” Between his antics, the oft-changing backdrops and intricate lights, Maiden has perfected the grandiose stage show of Spinal Tap’s dreams.

Also ambitious was the setlist, which opened with the first three cuts from their dense 2021 album “Senjutsu.” While the mid-tempo title track is light on memorable hooks, it juxtaposed McBrain’s thunderous toms with Dickinson operatic vocals, working in the lower end of his register. “Stratego” and “The Writing on the Wall” approached their classic sound more closely, but considering the hits-heavy setlist that had followed, the new material might have fit in a little better scattered throughout the night rather than a 20-minute slab at the beginning.

Once the hits started up, riffs arrived fast and furious, the crowd headbanging as hard as they could. Blasphemous power ballad “Revelations” transitioned the band from new material to classics, with gorgeous guitar work bleeding into the breakneck tempo changes. The proggy, multi-part “Sign of the Cross” snapped from horror movie score dour to jaunty guitar jam in an extended midsection. And the crowdpleasers which lit up the last stretch and encores were legendary: There was not a fist unpumped at UBS Arena for classics like “Run to the Hills,” “The Number of the Beast,” “The Trooper” and “Aces High.”

Early in the set, Dickinson joked of their aging fan base, “I’m amazed: Some of you are so fucking old, you should be dead!” But even as the band members march toward their 70s, their onstage antics and energy are in step with a teenage rock band, strutting, posing and throwing the devil horns because it looks cool. There were many instances where the members would wrap their arms around each other while someone was giving a particularly impressive solo, or touch the neck of a friend’s guitar and mock being zapped with electricity. That charge, conjured from grade-A heavy metal, is sure to keep Iron Maiden energized through their next world tour.