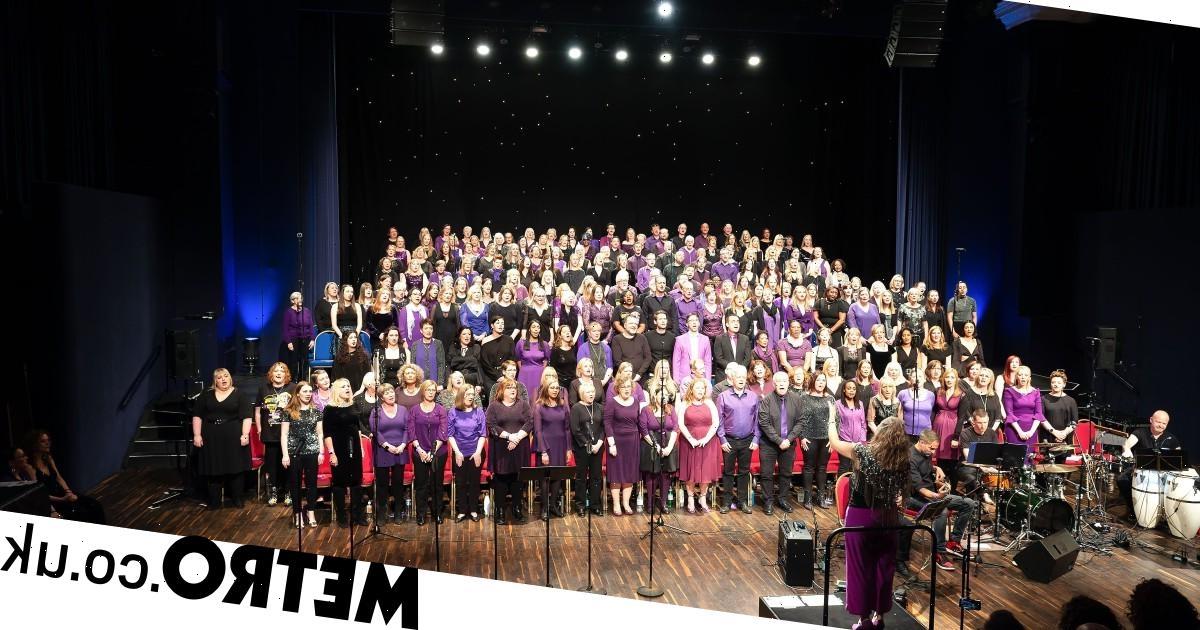 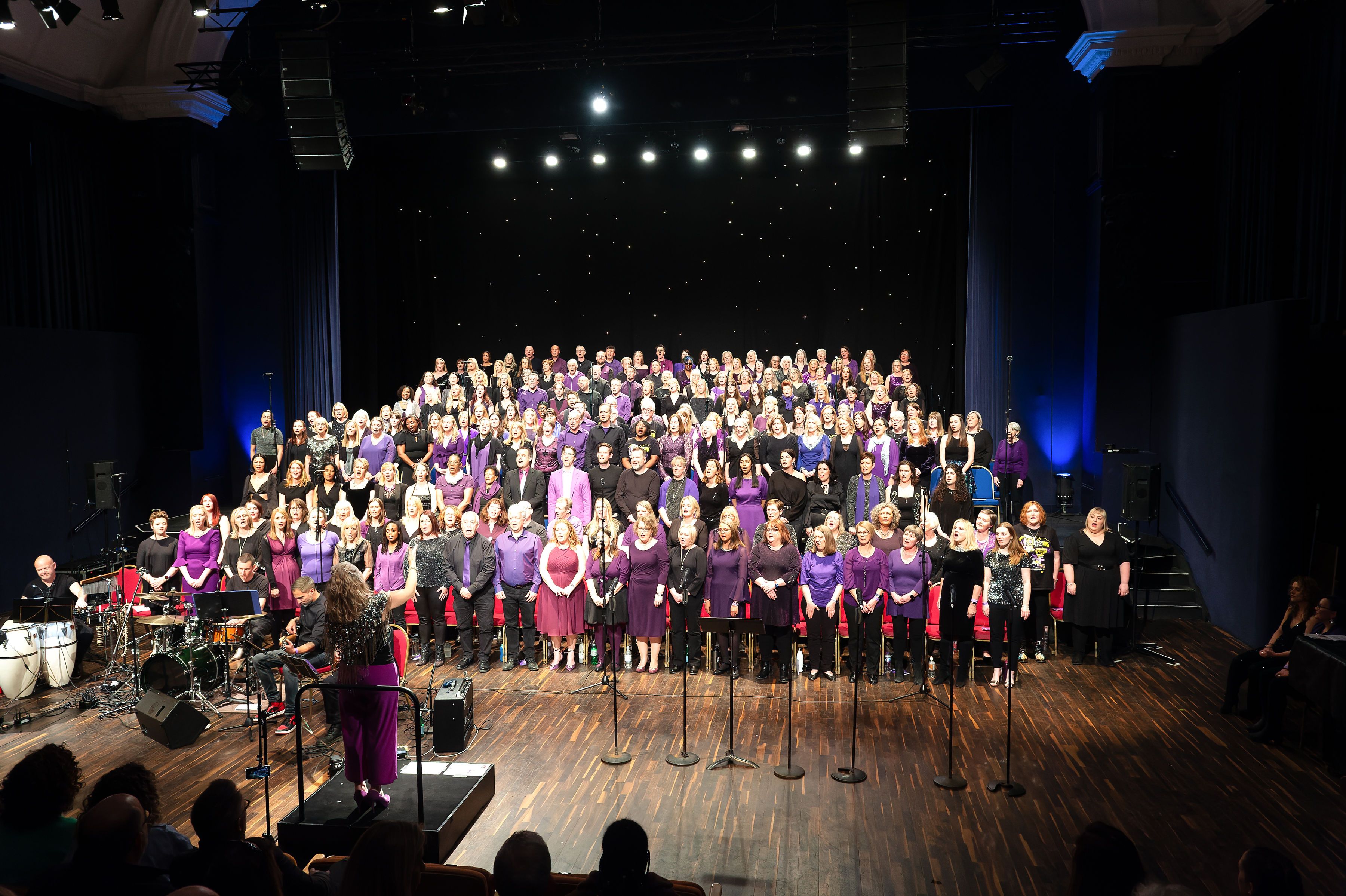 2019 was the year everything changed for me.

I was living in London, plodding along with my nice life, but then suddenly, within just six months, both my parents died.

They were in their early 70s, vibrant, alive and suddenly gone. To say I adored them would be an understatement. I was shattered.

I didn’t think I would ever feel any kind of joy again, but I have, and right now, I can feel it running through my veins more than ever before.

Tonight, I’m on stage with a 200 strong choir, about to launch into song.

The auditorium lights go down and the stage lights up. The intro of the song We Are Family fills the venue.

I gasp at the incredible sound coming from the choir, even more so because I am part of it.

I can barely believe that I am on a big stage at Blackheath Halls, celebrating 10 years of UK Soul Choirs, of which I have been part of for the last three years.

When I joined everything felt so bleak.

I became a member of this choir after my parents died. I moved two months after my dad’s death, who we lost just months after mum, down to Whitstable in Kent, from east London.

In London, I lived 10 minutes away from Mum and Dad. I saw them most days. I spoke to them daily. After they died, I couldn’t be where they no longer were. The void was just too great.

My mum had died suddenly – gone in just days of an advanced cancer that she didn’t know she had. It was a brutal ending for her. Dad was heartbroken without her.

Months later, we lost him from heart failure. I was with them both when they died, but I knew their deaths couldn’t be my defining moment. They were such a joyous pair, who embraced life. I knew I had to embrace what is left of mine.

Being part of this choir has been such a healing experience. It seems strange to say that a group of people who come together once a week to sing can change a life, but this bunch, they have truly changed mine.

I didn’t really want or know how to carry on after such a loss. I know parental loss is sadly a universal experience, but I felt like my life had been smashed to pieces. That I was the only one it was happening to.

Making the big decision to move to the coast after experiencing such loss wasn’t easy, but I had always wanted to move to the seaside and so decided to grab the opportunity and do one of the things I had always said I would. What I hadn’t really thought about was what I was meant to do once I got there.

I was in my early 40s, single and I don’t have any children, so it was a decision I made alone. At the time, I was in deep grief, but also knew I wanted to shake my life up and try something different. A new town, new people, a new chapter.

The week I moved to Whitstable, I overheard someone in front of me in a queue talking about the Kent Soul Choir. I’d always loved singing, but had never been part of a choir. It appealed to me, as a way of meeting people and to be honest, I wasn’t quite sure what to do with myself now that I had actually arrived at the coast. I did a little bit more digging and found out that a new term was about to start where they offered free taster sessions.

As I stood outside the church hall the following night, I thought about hot-footing it home. I was worried I wouldn’t be accepted, or that my voice would be terrible. But I’m so glad that I didn’t.

I still felt emotionally numb in my grief, but the welcome that evening was so warm and the songs so uplifting that I felt a little something in me shift.

The fact you didn’t have to audition was also a bonus. I mean, I can just about hold a tune at karaoke, but I knew nothing at all about choir singing. In fact, someone asked me that evening: ‘Are you Alto?,’ and I replied ‘No, I’m Lorna,’ — not knowing that ‘alto’ is a singing part.

They were right though, I am an alto. I joined the choir and met with them each week. And, together with the tenors and sopranos, we worked hard to rehearse songs that would culminate in a show at the end of that first term. And then the next, and the next.

Singing is just one of the things you get from choir, but the friendships, laughs, nights out and even overseas singing holidays have all been an unexpected bonus; and it’s all been invaluable in helping me with my grief.

Prone to bouts of anxiety even before mum and dad died, I was worried I would fall into a deep depression after my loss. Their deaths were sudden and grief has been a heavy weight the last three years. I call it the ‘grief coat’ – sometimes a light anorak, sometimes a coat of armour, but always on.

However, two hours a week, my place in the choir gave me an escape from my own sadness. My life now is much happier than I imagined it would be when I was back in London, heartbroken and missing my parents. Then, I had no clue what I would do next.

Slowly, after joining the choir, and feeling part of the community – united in song, a creeping feeling of life returning started to seep into my days, growing around my grief.

I’ve made friends who I know will be in my life forever. We’ve seen each other through a lot. To think, if I hadn’t walked through the door of the church hall that day, I may never have met some of these people.

My mental health is stronger and the colour of life has come back. Being part of the choir is one of the main reasons for this.

Over the last three years, I have taken part in five shows. But this show, here in Blackheath Halls, is different. Tonight, all of the UK Soul Choirs, from London and across different parts of Kent, have come together.

What started as a flicker of an idea from founder Abi Gilchrist has grown into something so special, that has undoubtedly helped many people in ways they could never have imagined.

Strictly Come Dancing singer Jamie Squire has joined us as a guest vocalist at Blackheath Halls. Before we blast into a stonking rendition of Purple Rain, he tells the audience that this choir is ‘one of the nicest things he has ever been involved in.’

And he’s right. It truly is one of the nicest things, and all it took was walking through those doors in one of my darkest hours.

To anyone else living through loss, I will always advocate starting something new; something that makes your heart lift a little, be it singing, art, dance or running. You never know the glimmers of joy it may bring into your life.

To find out more about UK Soul Choirs, visit their website here.