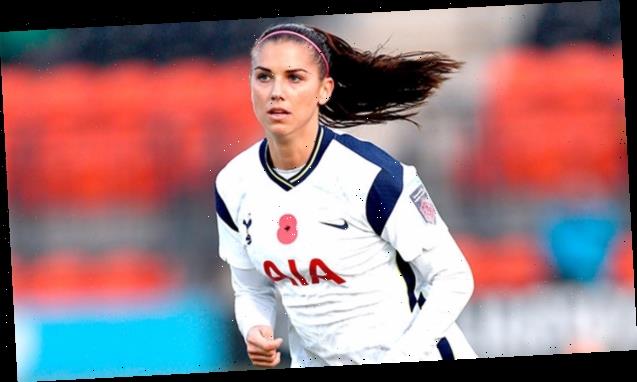 Alex Morgan returned to the soccer field this month, just six months after she gave birth to her first child in May. In an exclusive interview, she recalls returning to full strength after childbirth and much more!

Although she’s not chasing Olympic gold in Tokyo as planned, Alex Morgan is making moves on the soccer field in London. The U.S. Women’s National Team forward signed a one-year deal with Tottenham Hotspur in September — less than six months after she gave birth to her first child, Charlie Elena Carrasco in May. Alex officially returned to competition on Saturday, November 7, for the first time in over a year.

After welcoming Charlie, Alex didn’t waste any time getting back in the gym to return to full strength. But, with that, required a great deal of patience. “When I hit nine months, I thought to myself ‘am I ever gonna have my body back?’,” Alex recalled to HollywoodLife in an exclusive interview, where she also discussed her new partnership with Stella & Chewy’s. “But, there’s so many women that have been able to do it — Serena Williams, my teammates, and so many other women as well in professional sports,” she said, adding that seeing Serena and others bounce back after baby “made me feel really confident in myself being able to do that as well.”

While training after childbirth was no easy feat, Alex admitted that she put added pressure on herself to return to the game. “I kind of knew coming back after giving birth was gonna be a process and that I was going to have to be patient with myself and my body. [But] I definitely put pressure on myself,” she admitted. “Yet, I think this year and this pandemic have kind of alleviated that pressure for sure.”

As she continues to settle into life in London with her daughter and MLS player husband Servando Carrasco, Alex remains focused on the task at hand — playing the sport she loves. “At the end of the day, I want to feel back to myself on the field,” she said. “There’s natural pressure too, you know, coming over to England and deciding to play for at least three months, but up to nine months. It’s important for me to do what I came here to do and help my team be successful,” Alex explained.

As for how she feels six months postpartum? — “I mean, at this point now, I feel pretty much back to myself,” Alex said, noting that there’s still work to be done. “Obviously, on the field I’m gonna need to get some matches just to get some games in and to feel game fit and to feel super sharp. But in general, I think I’ve taken the right steps in just taking it slow in the beginning and strengthening my core,” she explained before admitting, “A lot of my leg muscles and core muscles and all that stuff, I kind of lost throughout the pregnancy.”

Now that Alex is a mom, she understands that continuing to fight for equal pay for women in sports is even greater in order to give Charlie a better future. “I think that I had this drive before Charlie that was unmatched — wanting to create equality for women within sports. I still have that, but Charlie definitely magnifies that,” she said, explaining, “Because I want to make her proud and I want to make sure that she has more opportunity and feels like she belongs even more than I ever did. I hope and I think that this work that we’re doing is not for ourselves. We’re not going to see a significant change in one or five years [with equal pay in female sports],” Alex continued. “But, the hope is that each year we do see change in order to get to true equality by the time that [Charlie] is able to really feel that effect and be a part of that.”

The U.S. Women’s National Team made headlines throughout 2019 over their continued fight for equal pay in their sport — and symbolically, for all female athletes. Last March, the team filed a gender discrimination lawsuit against the United States Soccer Federation, which stated that they are not paid as much as the men’s team. For example, the prize money for the 2019 Women’s World Cup was $30 million, in comparison to the men’s 2018 World Cup prize, which was a whopping $400 million, according to the New York Times.

While there is no trial date set, the team’s fight is far from over. A letter to U.S. Soccer officials, dated August 12 and signed by the 28 players involved in the suit, says in part (via ESPN): “While we are prepared to take our equal pay fight through a trial if necessary, we believe that both sides would benefit from an equal pay and equal working conditions settlement now.”

HollywoodLife caught up with the two-time FIFA Women’s World Cup Champion on behalf of her partnership with Stella & Chewy’s. They’ve teamed up together to launch the natural pet food company’s second annual National Adopt a Senior Pet Month. Alex and Stella & Chewy’s are hoping to make the decision to rescue even easier for potential new pet parents by covering the cost of adoption fees for senior pets rescued from any shelter in the U.S. or Canada during the month of November.

“My dogs Kona and Blue are honestly like my babies, my children, and they’re a big part of my family. So, any chance I can get to not only talk about my dogs, but also encourage people to adopt and rescue other pets — I definitely want to,” Alex said about the partnership. “The National Adopt a Senior Pet Monthcampaign is going on right now and it’s such an amazing event to be a part of because there are so many pets in shelters that really need forever homes. I feel so lucky to have two rescues in Blue and Kona and I want to give people the opportunity to get pets that they’ll love and pet to love them back unconditionally,” said Alex. To learn more, or to submit adoption forms for fee reimbursement visit www.stellaandchewys.com/journeyhome.