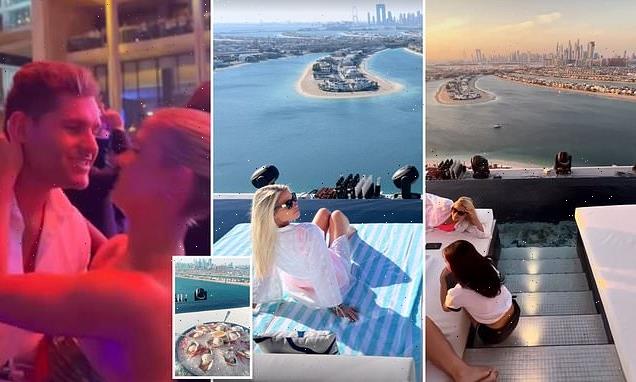 Partying like a royal! Princess Diana’s nieces Amelia and Eliza Spencer pose on sunbeds and lap up views of Dubai as they join stars at the lavish opening of the Atlantis

Lady Amelia and Eliza Spencer joined a host of stars partying in Dubai at the opening of Atlantis the Royal over the weekend.

Amelia, 30, the niece of Princess Diana and daughter of Earl Spencer, and her twin sister were joined by their partners Greg Mallett and Channing Millerd for the lavish hotel opening.

Celebrities at the launch of the 43 storey hotel included Kendall Jenner, Rebel Wilson, Liam Payne, Mark Wright and Michelle Keegan as well as Beyonce’s husband Jay-Z and their children.

Both sisters shared snaps on their Instagram page as they partied with their partners at the event, posting snaps as they lounged outside their hotel room and gazed across at the view of Dubai. 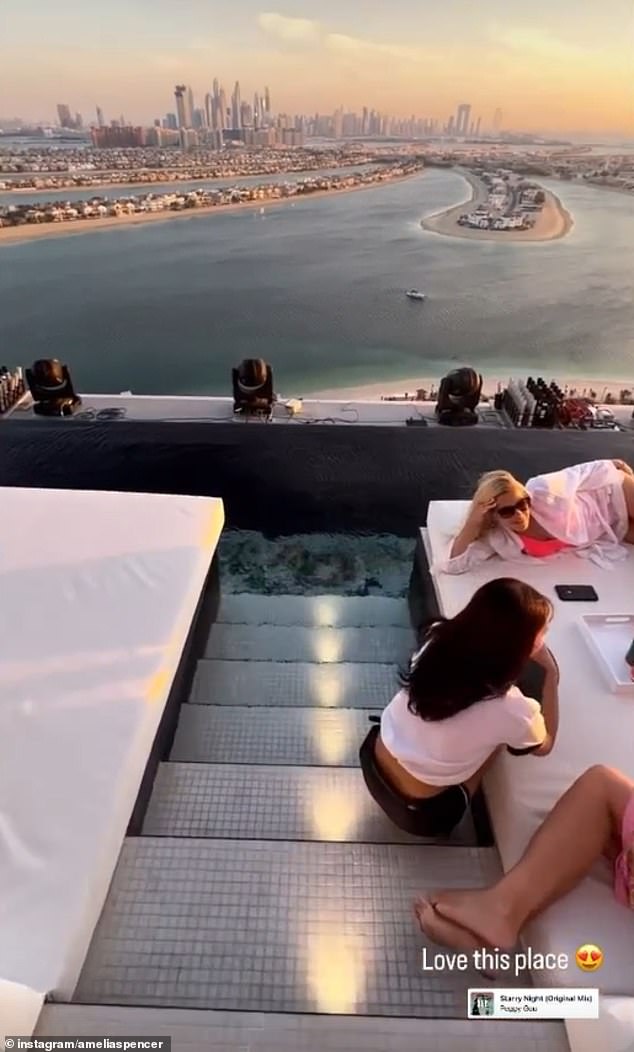 In one, the twins could be seen reclining on sunbeds as they took in the views from their room in Dubai.

In another, they could be seen dancing as Swedish House Mafia played a set for the opening night of the lavish hotel.

It is the first hotel to be designed with Instagram in mind, with a series of features designed to look good in photos including a fountain that spans four acres – and breathes fire. The cheapest room is $1,800 a night.

Party-goers glugged 4,000 bottles of Moet & Chandon champagne at the opening of the 43-storey hotel, which has 3,000 members of staff to cater for its wealthy guests. 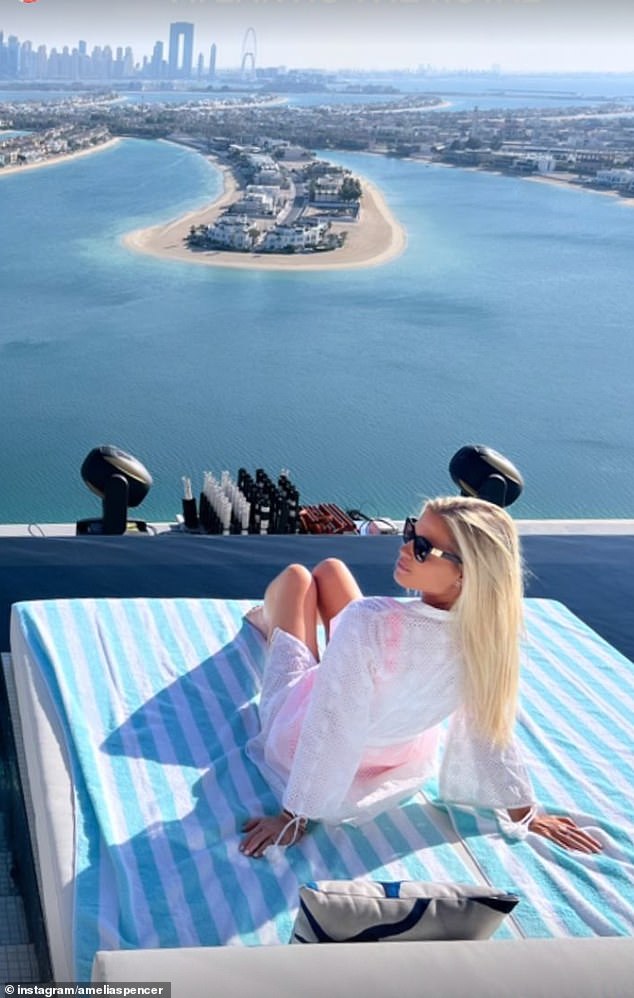 In one snap shared on social media over the weekend, Lady Amelia could be seen reclining on sunbeds as they took in the views from their room in Dubai

The VIP-only ‘grand reveal party’ comes ahead of the full opening next month to those members of the ‘general public’ who can afford it.

Of the 795 rooms, 44 have their own private infinity pools, hundreds of feet in the air.

Off one bar is an exclusive ‘ultra lounge’ with 20 tables, each having a minimum spend said to be upwards of $35,000. 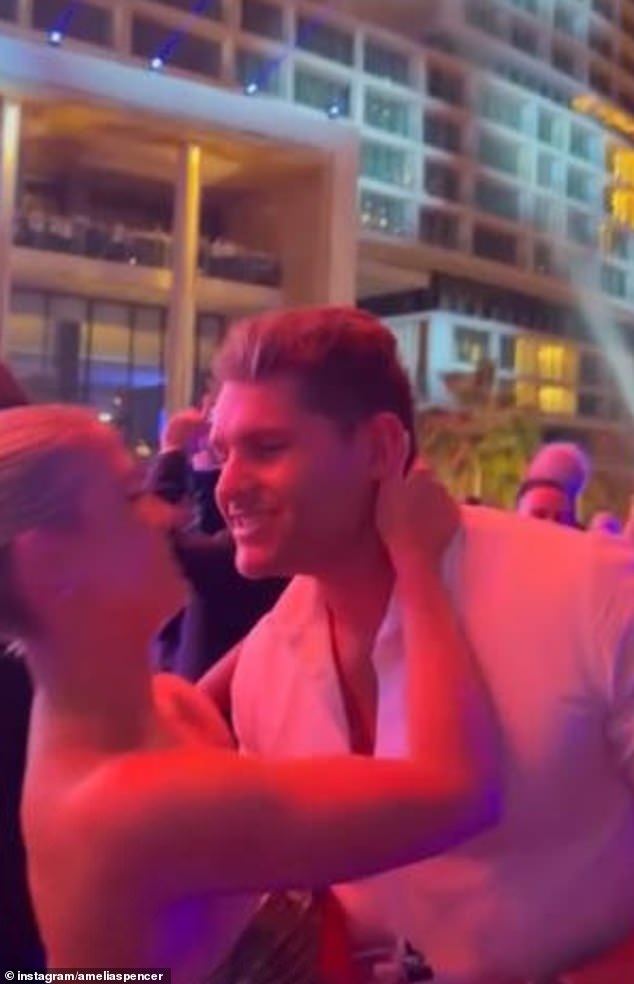 Amelia, 30, the niece of Princess Diana and daughter of Earl Spence r, and her twin sister were joined by their partners Greg Mallett and Channing Millerd for the lavish hotel opening

Hotel boss Timothy Kelly told The Mail on Sunday: ‘We call that the space for your one percenters’ – an exclusive spot only for the very richest ‘celebrities and dignitaries’.

The Spencer twins visit to Dubai is their second trip in recent weeks, after they celebrated Amelia’s bachelorette in South Africa.

Writing on her Instagram, Amelia said the party was her ‘dream bachelorette’, adding she had ‘one of the best days of my life with my favourite girls.’

The first cousin of Princes Harry and William was joined by her twin sister Lady Eliza Spencer, who wore a vibrant, floral mini-dress for the sun-soaked hen party. 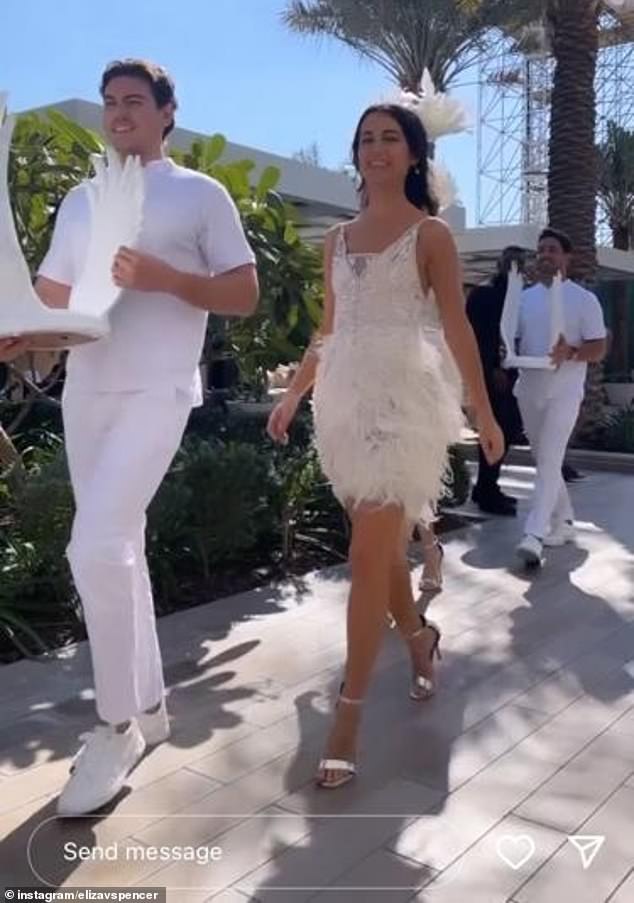 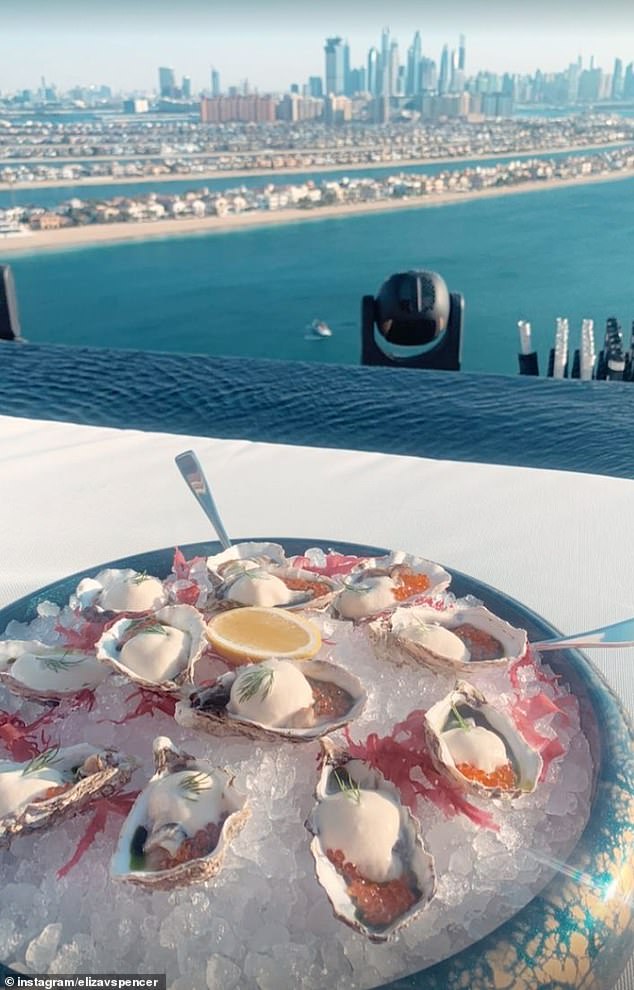 Meanwhile, Amelia opted for bridal white, in a stylish two-piece by Reformation.

She paired her ensemble with chunky gold link heels from Versace and matching bag, and swept her hair back into a sleek ponytail.

Later in the day, Amelia changed into a white mini-dress with a deep V-neck. 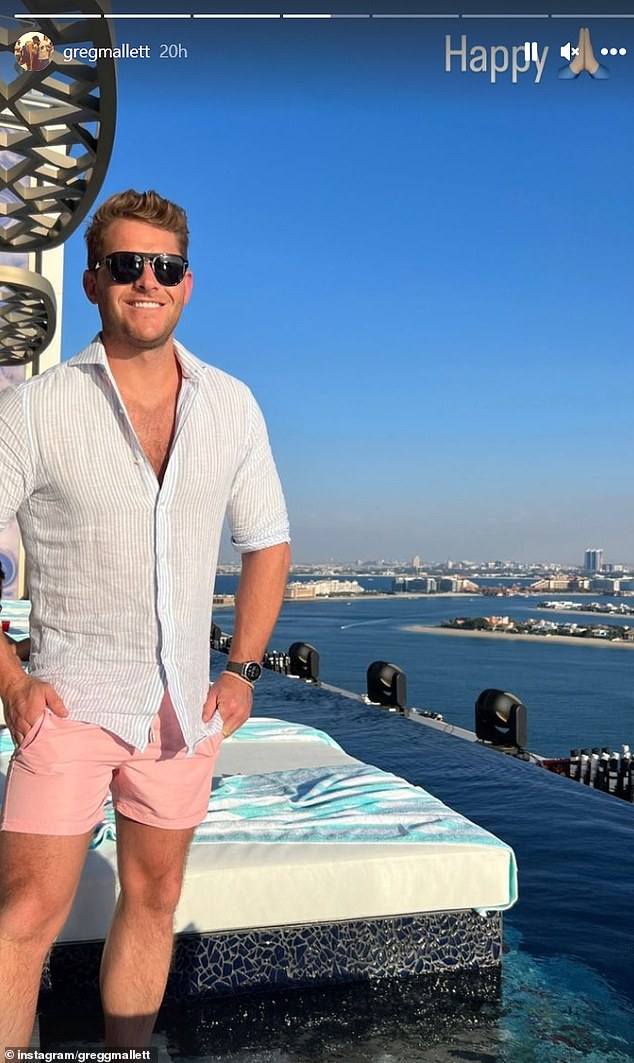 Lady Amelia’s fiancee, whom she is due to marry in March, posed for a snap as he lapped up the view from their infinity pool 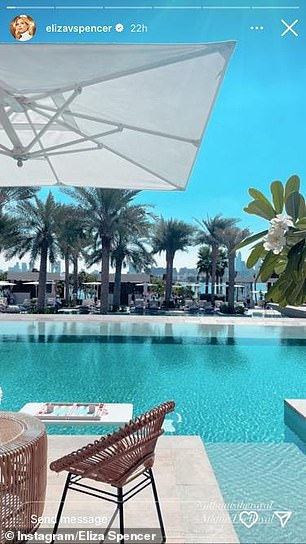 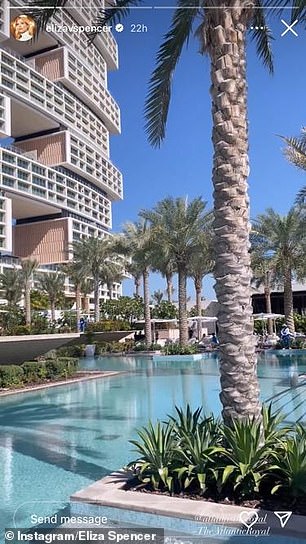 Jet-set getaway! The sisters appeared happy to lap up a number of the 90 pools in the resort, sharing snaps on their Instagram pages 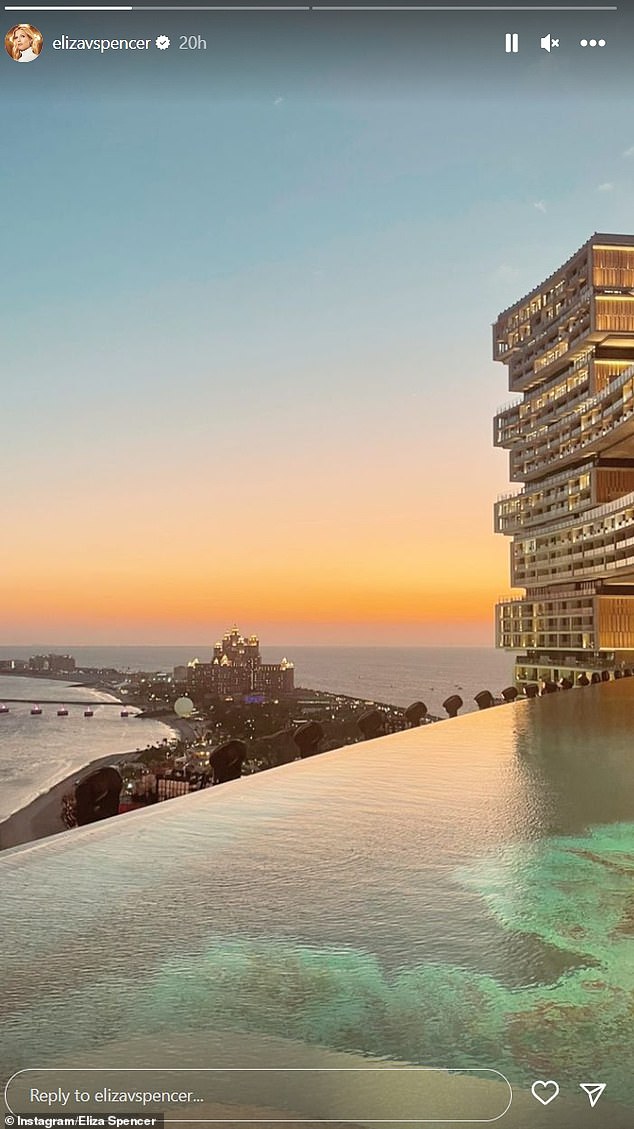 Her beau Greg shared a slideshow of the event on his social media, writing: ‘Can’t wait to marry you!’

Lady Amelia, whose first name is actually Katya, and her twin sister Eliza grew up in the Constantia area of Cape Town with siblings Kitty and Louis.

The three sisters attended the wedding of Prince William and Kate Middleton at Westminster Abbey in 2011.

While Lady Kitty, Louis and Lady Eliza were present at Prince Harry and Meghan Markle’s nuptials in May 2018, Amelia was missing. 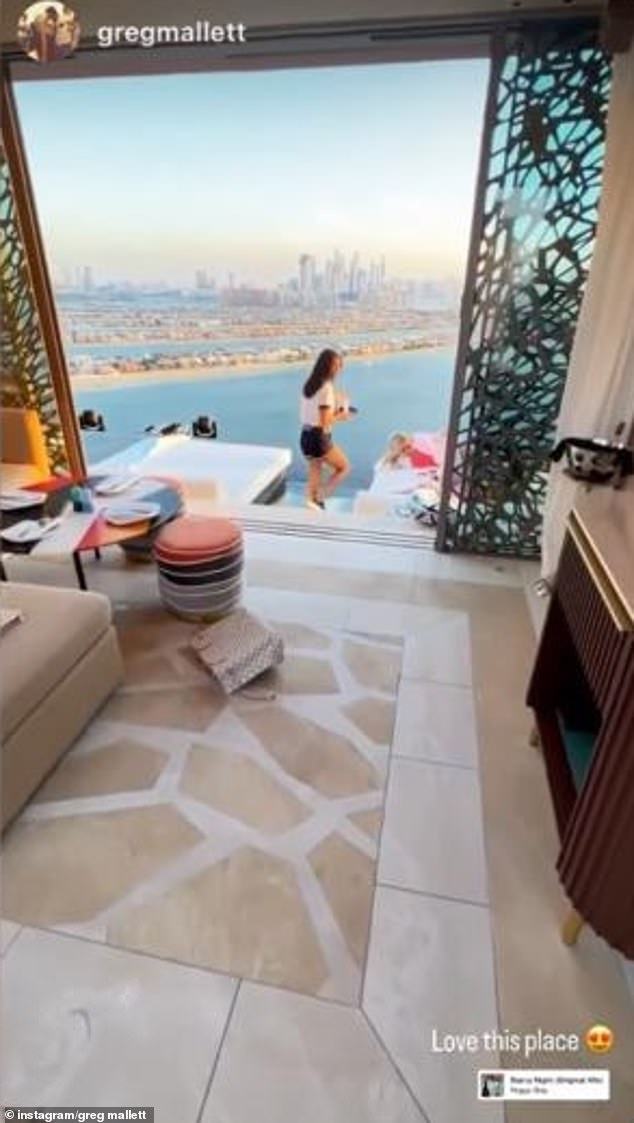