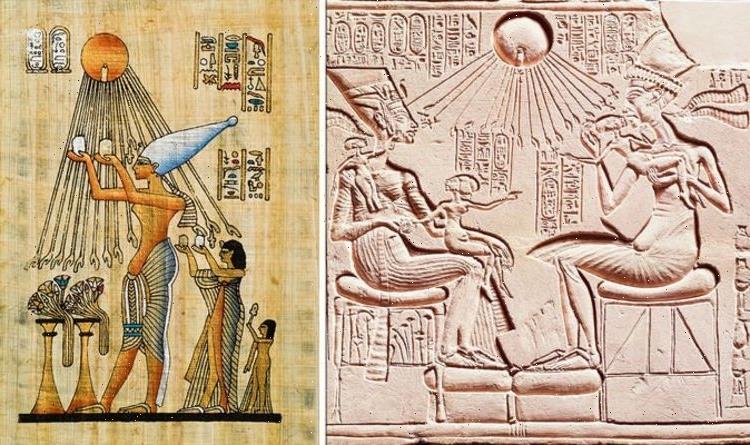 People have been drawn to Akhenaten for a number of reasons. Whether that is for his beliefs, the unusual art which he promoted, or for the policies he rolled out unlike any pharaoh before him. The radical changes he made to Ancient Egyptian society have led many to describe him as the “first individual in human history”.

It all stemmed from when, in the 18th dynasty, over 3,000 years ago, he put into motion what became known as the Amarna Revolution.

As if overnight, a new religious order was created, based on the worship of Aten, the sun’s disk, which Akhenaten elevated above all others in the Egyptian pantheon.

This single, unprecedented move has led to endless speculation about his background and motivation.

The turning point in Egypt’s history was explored during the Smithsonian Channel’s documentary, ‘Secrets: Nefertiti’, the name of Akhenaten’s wife whom he had six daughters with.

Egyptian religion up until Akhenaten’s reign had been strongly polytheistic: many different gods were worshipped.

Professor Barry Kemp, an Egyptologist at Cambridge University, said: “Akhenaten seems to have had a moment of truth of seeing that all of these other forms of divinity that people so liked really had no substance: there’s nothing you can see except what is man made, the only form of power that you can’t really understand is the Sun, and it’s there, you can see it and that’s all that matters.”

So, while he was the king of Egypt Akhenaten was also a revolutionary, and his religious changes sent a shockwave through Egypt, overturning age-old traditions.

Dr Kate Spence, an archaeologist at Cambridge University, said: “To ancient Egyptians, simply to say that there was one god and none of the others existed, would have profoundly affected the understanding they had of their whole environment and their whole cosmos.”

JUST IN: Putin blamed for ramping up energy bills for millions of Britons

It is believed that Nefertiti played a central role during this radial period, with this view cemented after an engraving of her and Akhenaten riding in a chariot was discovered in a tomb carved into one of the cliffs outside Armana.

Dr Jacquelyn Williamson, an Egyptologist at Harvard University, noted how the depiction showed the pair receiving the blessing of Aten, the newly promoted god.

She said: “Traditional Egyptian religion had functioned by pairing a male god with a female goddess who in turn created offspring.

“That engendering ensures the recreation of the world every day.”

But, with the gods abolished, Akhenaten and Nefertiti took the roles “for themselves”.

The move created for them a space in which they were the only link between the life-giving Sun god and the world of the living.

“By coming together as this image represents, they enforced the recreation of the universe.

“So, in many ways, she’s a type of sex goddess to this religion.”

Akhenaten died in his 17th year on the throne and his reforms did not survive for long.

His co-regent Smenkhkare, about whom we know virtually nothing, appears not to have remained in power for long after Akhenaten’s death.

The throne was instead passed to a child, Tutankhamun, believed to be the son of Akhenaten and Kiya.

Officials administering Egypt on behalf of Tutankhamun soon abandoned the city of Akhetaten and the worship of the Aten, and returned to Egypt’s traditional gods and religious centres.

The temples and cults of the gods were restored and people shut up their houses and returned to the old capitals at Thebes and Memphis.

Overtime, the process of returning things to how they were before Akhetaten turned into a mass destruction of everything associated with the former king, his image and name removed from monuments, his temples dismantled, and his city gradually falling into decline.