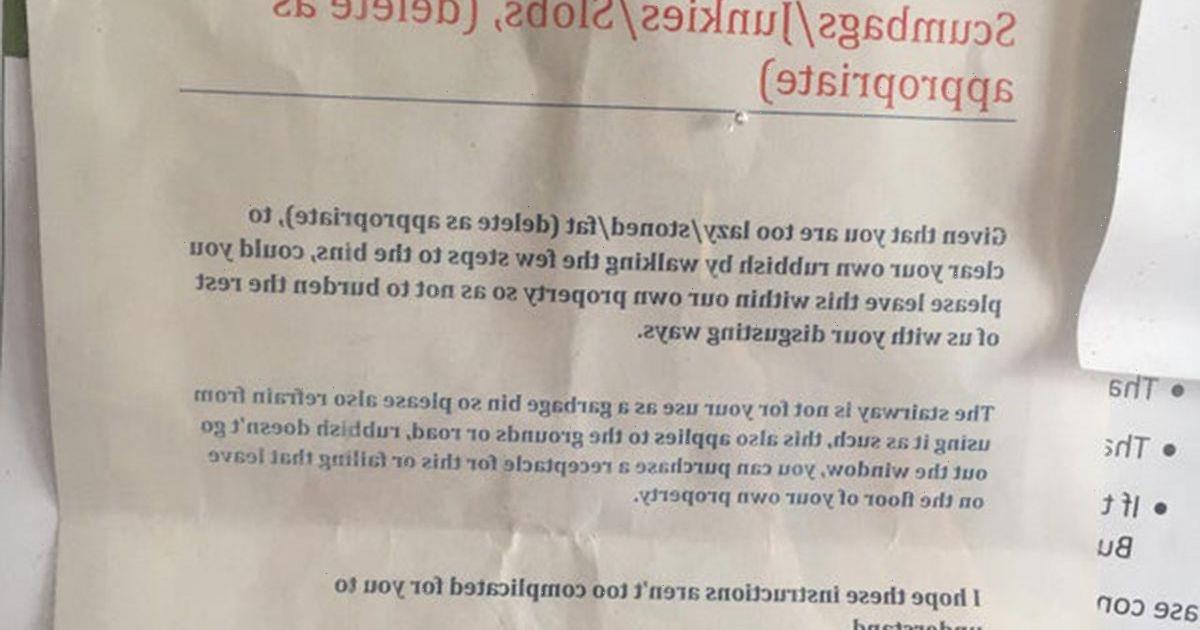 A Reddit user spotted a hilariously passive aggressive letter stuck up in the hallway by one of his fuming neighbours.

He shared a snap of the letter which was addressed to “Scumbags/Junkies/Slobs” online where it quickly went viral.

Almost 8,000 people liked the post, but not everyone was on the letter writer’s side.

The Reddit user captioned the snap: “Living in a flat is never easy.

“The state of it has been grim recently, and one of my neighbours clearly reached a breaking point.”

“Given that you are too lazy/stoned/fat (delete as appropriate), to clear your own rubbish by waling the few steps to the bins, could you please leave this within our own property so as not to burden the rest of us with your disgusting ways."

It continued: “The stairway is not for your use as a garbage bin so please also refrain from using it as such, this also applies to the grounds or road.

“Rubbish doesn’t go out the window, you can purchase a receptacle for this, or, failing that leave on the floor of your own property.

“I hope these instructions aren’t too complicate for you to understand.”

One wrote: “I'm on the writer's side, personally.

“They don't live in student accommodation so why should it feel like they do?

“I make an effort to be respectful and considerate to my neighbours, and I f***ing hate people that take the p*** or can't grasp the concept of consideration for others.

“Nothing worse than living around dirty, lazy slobs.”

“Used to live in a block of flats and yeah, people are disgusting scumbags,” added another.

“If I passed someone's door with a big pile of rubbish oozing into the carpet outside their door for days, I may have been known to move it so it would fall back into their flat as soon as they opened the door.”

While a third person shared his horror story, and noted: “I used to live in a block of flats in Erith as it was all I could afford at the time.

“As you say most were decent people, but then you get one massive bad egg that causes 90% of the problems.

“They had a habit of throwing dirty nappies out of the window, and one day when their microwave stopped working they just yeeted it out at the 10th floor.

“They also used to have raving parties most nights, and one morning had the cheek to bang on our door demanding that we stop hoovering at 10am as they were trying to sleep.”

He added: “It seems that for these sorts of places there isn't a spectrum of people… it seems to go from ‘decent folk’, then suddenly ‘slovenly spawns of satan’ with nothing in the middle.”

A renter added: “I’ve owned and rented flats in the past, and can confirm there’s just something mentally wrong with at least one person in every block.”

However, some people thought the note-writer was being a bit sensitive.

One such poster said: “This passive-aggressive person needs to spend more time in university apartments.

“That’ll desensitise them to their trash issues.”

And, others pointed out that a typo meant they had asked the neighbour to bring their rubbish round to their house… oops.