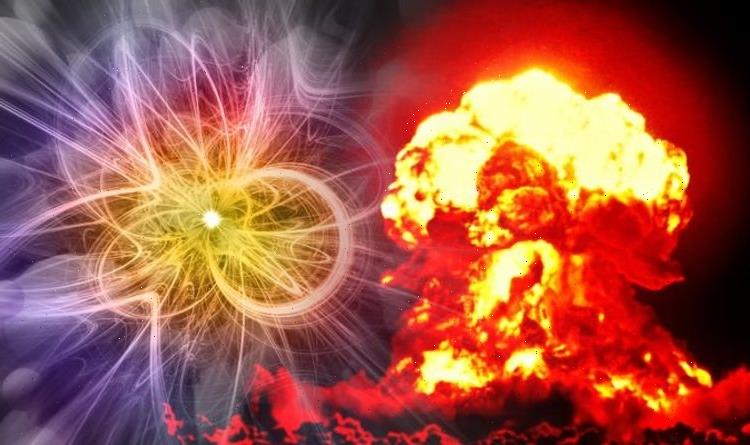 Why the 1920’s were pivotal to discovering antimatter

Antimatter is described as the analogue to normal matter, much like the flipped image of your face when you look in the mirror. In many ways, particles of antimatter appear to resemble their normal counterparts up until the moment when the two meet. When antimatter and matter particles collide, they completely and utterly annihilate one another, releasing in the process vast amounts of pure energy.

Particle physicists can use these volatile collisions to break down particles or create new ones in special machines.

But what about the ability to weaponise antimatter? What would happen if a big amount of the material was unleashed on the planet?

In theory, particle physicist and author Frank Close argued antimatter can be an absolute force of destruction if misused.

In his book Antimatter, Professor Close wrote: “Annihilating a kilogram of antimatter will give out about 10 billion times the amount of energy released when a kilogram of TNT explodes.

The most common form of antimatter scientists work with, is the positive counterpart to negative electrons – positrons.

As an example, Professor Close wrote as little as 50-millionths of a gram of positions are enough to produce a destructive blast equal to 1,814kg (4,000lbs) of TNT.

The physicist wrote: “Suppose we want grams of antimatter. Whether the plan is to bomb the Vatican as in Dan Brown’s novel Angels and Demons, or to make fuel for Star trek, or for a power source, all of them beg the question not just how to make and store it but what it should consist of.

“There is no need for special combustible chemistry like anti-TNT or benzene; it is the annihilation that releases energise the simplest antimatter will do.

“We have to make it one antiparticle and one antiatom at a time.”

Because of these constraints and just how incredibly hard it is to store antimatter, weaponising the particles seems improbable.

This is why particle physicist Aidan Robson of the University of Glasgow and the European Organization for Nuclear Research (CERN) told Express.co.uk such theories are best left to science fiction movies.

The physicist said: “They annihilate and then you have this stage of almost pure energy, which can then be converted to the new particles.

“But the point is if you have a positron beam and it meets anything itself, then that is what happens. It’s not travelling anywhere, it’s not going anywhere.”

Beams of positrons racing around a particle accelerator like the proposed Compact Linear Collider at CERN move through a vacuum environment.

So the chances of the positrons suddenly coming into contact with some form of gas and tearing out a hole in the planet’s mantle are next to none.

Because of this, Professor Robson said antimatter is “not as cataclysmic” as some might fear.

And in any case, the amount of antimatter produced at CERN is absolutely minuscule – too little to successfully weaponise.

Professor Robson said: “The idea you can produce masses of antimatter and make a bomb from it or something is not realistic. It’s not something anyone needs to worry about.”

The existence of antimatter – counterpart to ordinary matter – was predicted and theorised by physicist Paul Dirac as early as 1928.

According to the Institute of Physics (IOP), all particles we know of have an almost identical counterpart, with a reverse charge and opposite spin.

Negative electrons, for example, have a mirror image in positive positron particles.

The IOP said: “However, hardly any antimatter is seen in the observable universe and why there should be vastly much more normal matter is one of the great unsolved problems in physics.”