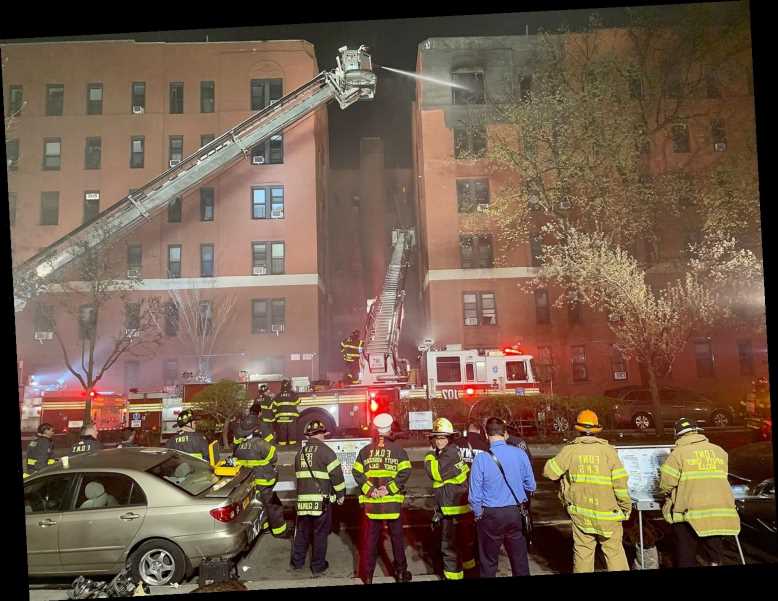 At least 21 people were injured and nearly 250 residents displaced after an eight-alarm fire tore through a New York City apartment building on Tuesday, officials said.

The blaze broke out on 34th Avenue in the Jackson Heights neighborhood of Queens shortly after 1 p.m., and by the time firefighters arrived, it was "an advanced fire," FDNY Commissioner Daniel A. Nigro said.

"This is a very complicated and prolonged operation [with] heavy smoke and heat conditions," Gala said. "This is a significant fire. We have over 350 fire and EMS personnel on the scene. The fire is still not under control. We will be here through the night."

Gala said the building houses about 150 apartments, and that the fire consumed one side of the "very wide and deep building" after it spread quickly through the cockloft, or the area between the ceiling and the roof.

"Everybody was panicking, all you see is the smoke," resident Edwin Martinez told WABC. "When you came out of the building, you couldn't see anything. It was just all gray."

Resident Kimberly Singhi told the outlet that she "got scared" after "everything went black," and was able to evacuate successfully with her mother and pets in tow. Keyla Cardenas, 10, said she was home alone with her dog when the blaze began, but was able to escape after a neighbor alerted her.

"I feel kind of nervous and sad because that was the only house we had and now we don't know where to go," she told NY1.

While the cause of the fire remains unknown, Nigro said that it spread as much and as quickly as it did because of an open door.

"The occupant fled and left the door open," he said. "We've stressed over the years the seriousness of that. If you do unfortunately have a fire in your home, it's important to close that door because the fire spreads out into the hallway and units are unable to make a quick advance. What we see here is a [fire] that could possibly have been avoided."

Members of the community were quick to arrange help for their neighbors, and a pick-up area for donations and food popped up shortly after the blaze, NY1 reported.

"I've been crying the whole day. It's like, really sad," resident Joselyn Rojas told the outlet. "You never think you're going to lose everything out of nowhere and you have to start all over, especially if you are an immigrant and you have no family here. So it's really hard."

Nigro said the blaze was "very difficult for our members, very taxing," and that units were using interior and exterior streams to put it out.