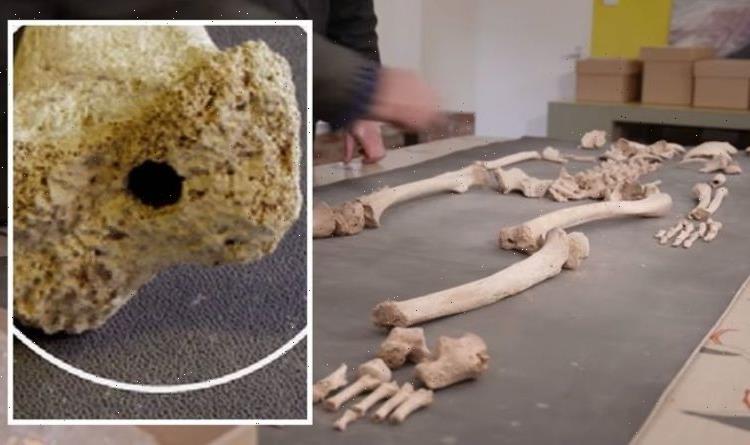 The southwest of England is an archaeological goldmine. From the Jurassic Coast to Stonehenge to the legendary birthplace of King Arthur in Tintagel, amazing discoveries are made on a daily basis. Just last week, researchers made a breakthrough at Stonehenge that exposed chalk plaques at the stone circle depicting real objects, rather than the abstract patterns as had previously been thought.

Dr Martin Green is a farmer and archaeologist excavating his own farm, and runs a private museum filled with the things he has found around the farm.

Skeletons, flints, skulls of ancient cows and all manner of ancient bits and bobs fill the museum, which is very popular with local societies.

A discovery he made in 2009 provides one of the strangest pieces of evidence in the UK to date.

He explained: “This is an adolescent female and, when the bones were being cleaned and taken out of the grave, there were some very unusual aspects of them.”

The teenage girl’s body was found in one of Dr Green’s turnip fields.

He said: “This is where we discovered a drill hole here, this femur that you can see.”

The end of the girl’s leg bones have holes in them.

He continued: “We did some scanning, electron microscope work on here, and CT scanning.”

While twisting his hand clockwise, he said: “You could see the actual way it had been drilled with a tool in this kind of motion.”

Drilled holes appear in both of the girl’s legs as well as her left arm. Dr Green suspects that, as the girl’s body began to decompose, someone attempted to stop it from falling apart.

The documentary’s host Clive Anderson explained she might have been stringed together “like a kind of human puppet”.

Holes in different ends of connecting bones suggest that they could have been linked together.

Dr Green said: “Presumably you’d either use a bone point or a stick, or possibly you may even use some kind of sinew as a form of string. Obviously we’re never going to be able to say for sure, but it’s tempting to say that that is the kind of thing they were doing.”

Mr Anderson added that, although it is difficult to know for sure, the discovery suggests “at least rudimentary efforts to preserve a dead body because, presumably, the point of all this drilling was to keep the corpse intact”.

Although it is not clear when the girl’s body dates back to, there is evidence that mummification took place in Bronze Age Britain.

A 2015 study from the University of Sheffield found Ancient Britons may have mummified some of their dead.

Analysis at several Bronze Age burial sites found some remains are consistent with prehistoric mummies found in northern Yemen, as well as a partially mummified body recovered from a bog in County Roscommon, Ireland.

Dr Tom Booth used microscopic analysis to compare bacterial bioerosion of skeletons at various sites across the UK with those in Yemen and Ireland.

He said: “Our research shows that smoking over a fire and purposeful burial within a peat bog are among some of the techniques ancient Britons may have used to mummify their dead.

“Other techniques could have involved evisceration, in which organs were removed shortly after death.”