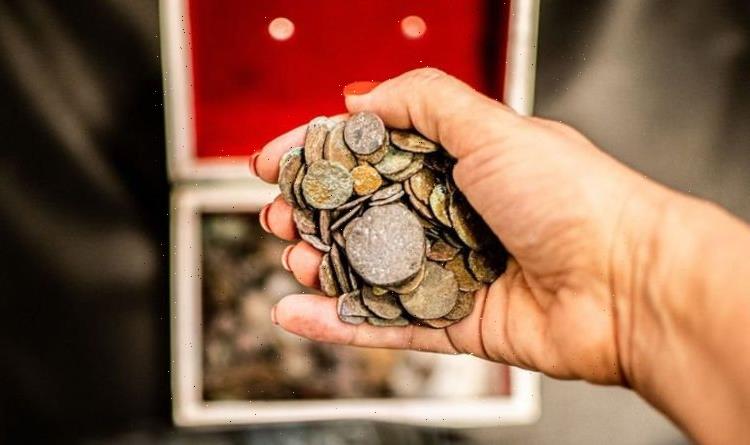 The hoard of coins was seized by the Israel Antiquities Authority (IAA) in the city of Ashkelon on Israel’s Mediterranean coast. Located just 31 miles (50km) south of Tel Aviv, ancient Ashkelon was the biggest and oldest seaport in the biblical land of Canaan. According to the IAA, the group’s Robbery Prevention Unit has been alerted last month about the possibility of ancient coins illegally swapping hands in the city.

In a Facebook post published on Monday, the IAA said “suspicion arose” about the owner of a jewellery store in Ashkelon.

The group said: “A search of the suspect’s home and store revealed scandalous results; thousands of ancient coins from different periods, a metal detector, and excavation equipment.”

The IAA claimed the suspect has since been caught, investigated and handed over to the appropriate authorities to face further legal action.

The seized coins, meanwhile, have been left with the IAA’s experts to be analysed and dated.

“Looters destroy archaeological sites for their own greed by disconnecting artefacts from their archaeological context, erasing entire chapters from the history of the land of Israel – stories that will never be told again”.

The IAA is an independent government authority that oversees Israel’s archaeological excavations and the enforcement of laws regarding the discovery and trade of antiquities.

Since 1978, Israel has made a concerted effort to crack down on the illegal trade of artefacts and antiquities – items dated to before 1700 AD.

The Antiquities Law of the State of Israel of 1978 replaced the previous British Mandatory Antiquities Ordinances.

With evidence of human activity dating to the Neolithic period, Ashkelon has been ruled by the ancient Egyptians, Canaanites, Philistines, Assyrians, Babylonians, Roman, Persians, Arabs and Crusaders, among others.

The city was destroyed in 1270 by the Mamluk Sultanate, which spanned the whole of Egypt, the Levant and parts of modern-day Syria.

Today, the modern Ashkelon is one of the biggest cities in Israel’s Southern District, with a population of more than 144,000 in 2019.

And because of its rich history, the city has been the site of many fascinating archaeological discoveries over the years.

In 2010, for example, the expansion of the Barzilai Medical Center led to the discovery of an intricately-decorated pagan altar.

The granite structure was dated to the Roman period, between the first and second centuries AD, and was decorated with bulls’ heads and laurel wreaths.

According to the IAA, the object was found in the middle of an ancient burial field.

Dr Yigal Israel, Ashkelon District Archaeologist of the IAA, said at the time: “The discovery further corroborates the assertion that we are dealing with a pagan cemetery.

“It is an impressive find that has survived 2,000 years.”

The altar only measured about 60cm in height and would have been used for the burning of incense.

Dr Israel added: “Such altars usually stood in Roman temples and visitors to the temple used to burn incense in them, particularly myrrh and frankincense, while praying to their idols.

“We can still see the burnt marks on the altar that remain from the fire.

“The altar was probably donated by one of the families who brought it to the cemetery from the city of Ashkelon.”