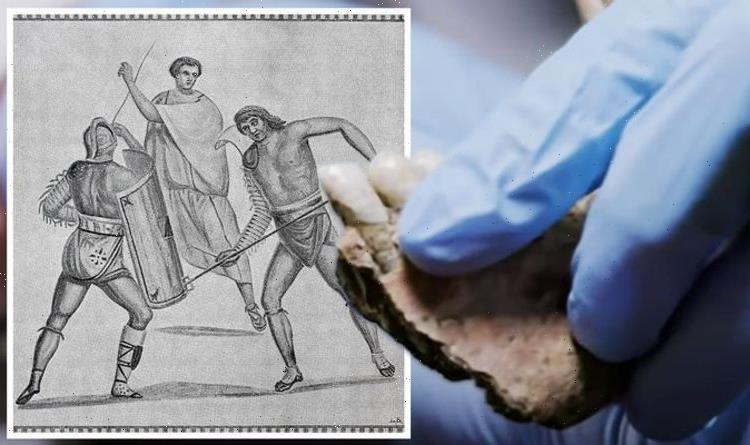 The gladiators were extraordinary human beings. Specially trained and fed a diet most Romans could only dream of, these men were among the most elite athletes in the Roman Empire. Each event, they would enter an arena packed with thousands of bloodthirsty spectators, facing a 50 percent chance of death.

Their performance was intended for myriad reasons: for the benefit of the general public; for emperors and rich aristocrats to display their wealth to the population; to commemorate military victories and expeditions; to mark important events and anniversaries or simply to distract from the dire economic and political environment.

Their existence is well-documented across the former Roman Empire, yet their presence in Britain has long been questioned.

However, as explored in the Smithsonian Channel’s documentary, ‘Secrets: ‘Headless Gladiators of York’, a mass burial grave discovery in the northern city in 2016 not only revealed that the UK had its own legion of fighters, but also offered insight into where they came from.

The narrator noted: “Today, gladiators may have the reputation of being the superstars, the elite of the Roman Empire, but further analysis of the teeth of the York skeletons reveals astonishing new insight into the harsh lives they lived.”

Many, if not most, of the Roman gladiators would have experienced extreme poverty as children.

They were recruited by the wealthy elite and weaned on a protein-rich diet.

Analysis of the York skeletons’ teeth reveals just how poor these gladiators once were.

JUST IN: China warning as space probe heads to Moon

“You can see a good example on this canine tooth — horizontal lines indicating that this person was stressed when they were growing up, when their teeth were developing.

“Not the most ideal situation for that person when they were a child, there was something going on in their lives that led to those defects.”

The lines were found on the teeth of many of the men — a sign of infant malnourishment.

But while they may have starved as children, their teeth show that as adults, the group ate unusually well.

Close analysis of the skeletons also shone light on how the Romans operated in Britain.

Some of the skeletons bore genetic makeup not native to the British Isles.

At least one had affinities with people from North Africa and the Middle East.

This provided vital evidence for long-distance migration during the Roman era.

All but one would have had brown eyes and black or brown hair but one had distinctive blue eyes and blond hair similar to the single Anglo-Saxon individual.

The rest were more closely related to indigenous Britons, similar to the modern Welsh population.

The scale of the gladiator business was truly colossal.

It is thought that 700,000 warriors died in the Colosseum alone.

The skeletons at York all had injuries consistent with bloody battles: sliced and fractured bones and, most noteworthy, many were decapitated.