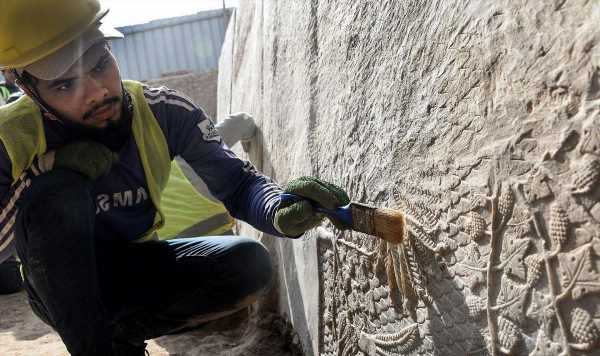 Archaeologists scrambling to mend the brutal damage to some of the most important historic sites in Iraq by Islamic State (ISIS) have stumbled across spectacular ancient Assyrian reliefs not seen for thousands of years. During the’ brutal onslaught of Iraq between 2014 to 2016, the terror group destroyed several sites which it viewed as idolatrous. These included the Mashki Gate of the ancient Assyrian capital Nineveh, present-day Mosul north of Iraq. A US-Iraqi excavation team hoping to reconstruct the gate after its destruction has stumbled upon eight carvings.

The ancient rock carvings, believed to be more than 2,700-years-old, are marble slabs depicting scenes of war from the rule of Assyrian kings, in the ancient city of Nineveh. The carvings show landscapes filled with palms trees, grapes, figs and more. In another carving, a soldier can be seen drawing back his bow to fire an arrow.

The grey stone carvings date to the rule of King Sennacherib, who help power in the ancient kingdom from 705 to 681 B.C, according to a statement from the Iraqi State Board of Antiquities and Heritage.

King Sennacherib managed to expand Nineveh as the Assyrians’ imperial capital and largest city — which lies on a major crossroads between the Mediterranean and the Iranian plateau — and included a palace construction.

The carvings were probably taken from King Sennacherib’s palace and used as construction material for the gate, experts say.

Fadel Mohammed Khodr, head of the Iraqi archaeological team, said in a statement: “We believe that these carvings were moved from the palace of Sennacherib and reused by the grandson of the king to renovate the gate of Mashki and to enlarge the guard room.

The fortified gate was an iconic part of Iraq’s skyline, and it had been had been restored in the 1970s due to its “symbol of the city’s long history”. ALIPH, the Swiss-based International Alliance for the Protection of Heritage in Conflict Areas, has said that the Mashki Gate was an exceptional building”.

But following the ISIS damage, the monument is to be turned into an educational centre on Nineveh’s history. The biblical kingdom of ancient Assyria left behind some of the most spectacular pieces of Mesopotamian art.

Iraq was the birthplace of some of the world’s first-ever cities, where some of the first examples of humanity’s writings have been found. It was also home to the Sumerians and Babylonians.

There have been multiple incidents of looting and trafficking of ancient artefacts in Iraq, particularly back in 2003 when the Iraq Museum in Baghdad when renowned collections were stolen, sparking international outrage.

According to the British Council, the “looting and sale of antiquities have encouraged the targeting of museum collections, with the profits going on to provide support for terrorist groups”.

It adds that “portable objects remain most vulnerable during times of instability and have been particularly difficult to repatriate once they enter the illegal antiquities market”.

But in response to the destruction of heritage sites in both Iraq and Syria by ISIS in 2015, the British Museum developed the Iraq Scheme, which was back by the UK government with a £2.9million funding boost under an Official Development Assistance (ODA) grant through the Department for Digital, Culture, Media and Sport (DCMS).

The four-year programme finished in 2020 and aimed to rebuild the destruction caused by ISIS, which has since seen its power in the regions diminish following its brutal reign of terror.

Now, some of the most stunning reliefs and statues can be found in the British Museum, but in 2019, it conducted a huge handover of Iraqi artefacts to the authorities there.

Many of the items sent back to Iraq were thought to have been over four millennia old. The collection of historic artefacts included over 150 inscription tablets and some Sumerian-era administrative documents which had once been looted and brought to Britain.