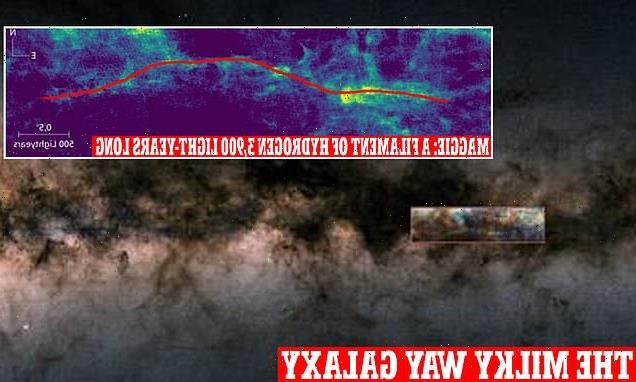 Located 55,000 light-years away from Earth is a hydrogen filament that astronomers say is the largest structure in the Milky Way.

Co-author Juan Soler already found the first clue to this object a year ago and named it ‘Maggie’ after the longest river in his home country of Colombia, called the Río Magdalena.

‘Maggie was already recognizable in earlier evaluations of the data. But only the current study proves beyond doubt that it is a coherent structure,’ Soler said in a statement.

Scroll down for videos

Hydrogen formed about 380,000 years after the Big Bang, the Milky Way formed about one billion years before, and is the most widespread substance in the universe.

However, detecting the gas can be a grueling task, which makes the discovery of the long filament exceptionally exciting.

Jonas Syed, a PhD student at MPIA and first author of the paper published in the journal Astronomy & Astrophysics, said in a statement: ‘The location of this filament has contributed to this success.

‘We don’t yet know exactly how it got there. But the filament extends about 1600 light-years below the Milky Way plane.’ 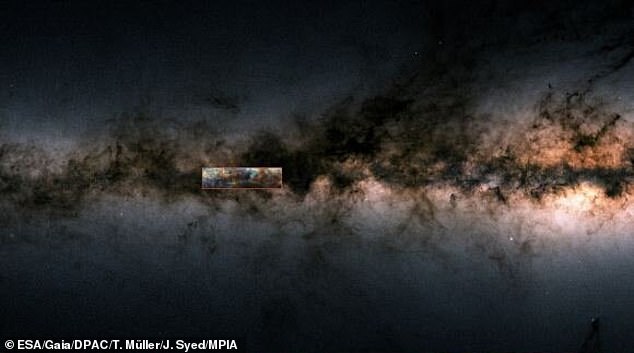 The structure is located 55,000 light-years away from Earth, inside the Milky Way

As a result, the radiation from the hydrogen, which is at a wavelength of eight inches, stands out clearly against the background, making the filament visible.

After a deeper analysis of Maggie, the team found the gas converges at some points along the filament, which is likely areas where the hydrogen accumulates and condenses into larger clouds.

The researchers also suspect that those are the environments where the atomic gas gradually changes into a molecular form.

‘The Maggie filament discloses a hub-like feature in the east, on which smaller-scale filaments appear to converge, and a tail that thins out toward the west,’ reads the published study.

Hydrogen formed about 380,000 years after the Big Bang, the Milky Way formed about one billion years before, and is the most widespread substance in the universe. Although Maggie is massive, this image shows how extraordinary in size the Milky Way is

‘The northwestern part shows a connection to the midplane, potentially feeding off the material located at higher latitudes. Most of the filament, however, appears to be disconnected from the Galactic midplane material.’

Based on previously published data, the team also estimated that Maggie contains eight percent molecular hydrogen by a mass fraction.

‘Additional data, which we hope will give us more clues about the fraction of molecular gas, are already waiting to be analyzed,’ he continued.

WHAT IS THE EUROPEAN SPACE AGENCY’S GAIA PROBE AND WHAT IS DESIGNED TO DO?

Gaia is an ambitious mission to chart a three-dimensional map of our galaxy, the Milky Way, and in the process reveal its composition, formation and evolution.

Gaia has been circling the sun nearly a million miles beyond Earth’s orbit since its launch by the European Space Agency (ESA) in December 2013.

On its journey, the probe has been discreetly snapping pictures of the Milky Way, identifying stars from smaller galaxies long ago swallowed up by our own.

Tens of thousands of previously undetected objects are expected to be discovered by Gaia, including asteroids that may one day threaten Earth, planets circling nearby stars, and exploding supernovas.

Astrophysicists also hope to learn more about the distribution of dark matter, the invisible substance thought to hold the observable universe together.

They also plan to test Albert Einstein’s general theory of relativity by watching how light is deflected by the sun and its planets.

The satellite’s billion-pixel camera, the largest ever in space, is so powerful it would be able to gauge the diameter of a human hair at a distance of 621 miles (1,000 km).

This means nearby stars have been located with unprecedented accuracy.

Gaia maps the position of the Milky Way’s stars in a couple of ways.

Gaia’s all-sky view of our Milky Way Galaxy and neighbouring galaxies, based on measurements of nearly 1.7 billion stars. The map shows the total brightness and colour of stars observed by the ESA satellite in each portion of the sky between July 2014 and May 2016. Brighter regions indicate denser concentrations of especially bright stars, while darker regions correspond to patches of the sky where fewer bright stars are observed. The colour representation is obtained by combining the total amount of light with the amount of blue and red light recorded by Gaia in each patch of the sky.

It pinpoints the location of the stars but the probe can also plot their movement, by scanning each star about 70 times.

This is what allows scientists to calculate the distance between Earth and each star, which is a crucial measure.

In September 2016, ESA released the first batch of data collected by Gaia, which included information on the brightness and position of over a billion stars.

In April 2018, this was expanded to high-precision measurements of almost 1.7 billion stars.