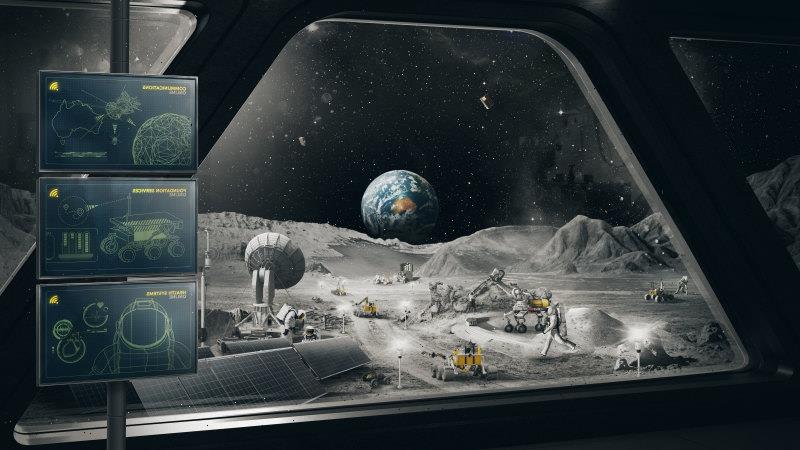 Australia will play a key role in establishing a sustainable human presence on the moon after striking an agreement with the United States’ civilian space program for a locally made rover to be part of future missions.

NASA is aiming to return humans to the moon as soon as 2024 to build a strategic presence at the Artemis Base Camp – a permanent outpost at the lunar south pole – which will pave the way for long-term scientific activity as well as the first human mission to Mars in the 2030s. 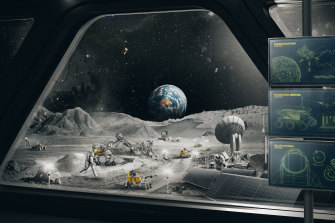 An artist’s impression showcasing how an Australian made rover could contribute to a bigger international exploration program on the Moon.

The federal government will support Australia’s leading businesses and researchers to develop the semi-autonomous robot through its $50 million trailblazer program, which will be sent to collect lunar soil that contains oxides. Using separate equipment, NASA will aim to extract oxygen from the soil.

Prime Minister Scott Morrison said the mission would contribute to growing the nation’s economy, with an opportunity for Australia to succeed in a global space sector that is forecast to be worth more than $1 trillion by 2040.

“This mission to the moon is just one exciting way that we can create opportunity and jobs for the future, and our government will ensure Australians reap the benefits,” Mr Morrison said.

“By 2030, we want to triple the size of our space sector – adding $12 billion to our economy and creating up to 20,000 new, high-skilled jobs – providing more opportunities for Australians and industries.”

Under the agreement, NASA will fly the rover to the moon as early as 2026, provided it meets a range of conditions during its development.

Greater collaboration in space will form another part of the new AUKUS security pact between the US, Australia and Britain, with any future military action to rely on satellites for communication, navigation and weapon guidance. A Space Threat Assessment report from the Centre for Strategic and International Studies, a national security “think tank” based in Washington, recently warned of Russia’s increased testing of anti-satellite weapons and China increasing its space capabilities.

Australia was among the first partner countries to join NASA on international cooperation with the signing of the Artemis Accords in October last year.

The accords are grounded in the Outer Space Treaty of 1967 and establish a practical set of principles to guide space exploration cooperation among nations. They aim to increase the safety of operations, reduce uncertainty, and promote the sustainable and beneficial use of space.

While Americans first walked on the moon’s surface more than 50 years ago, explorers only spent a total of 16 days on the lunar surface. The missions were all in the equatorial region, in an area less than 100 kilometres in size on a lunar surface area that is the size of Africa.

Head of the Australian Space Agency, Enrico Palermo, said the mission would demonstrate the Australian industry’s world-leading skills and experience in remote operations, drawing from expertise in the resources and mining sector.

“Australia is at the cutting-edge of robotics technology and systems for remote operations, which are going to be central to setting up a sustainable presence on the moon and eventually supporting human exploration of Mars,” the former Virgin Galactic chief said.

“This agreement will leverage our expertise in remote operations to grow our space sector here at home, while developments that come from preparing for space will make sure our resources sector keeps powering ahead too.”

NASA Administrator Bill Nelson said the agreement would serve to strengthen the long-time relationship between the US and Australia in areas related to space exploration, which dates back more than half a century ago to the Apollo program.

“By working together with the Australian Space Agency and our partners around the world, NASA will uncover more discoveries and accomplish more research through the Artemis program,” Mr Nelson said.