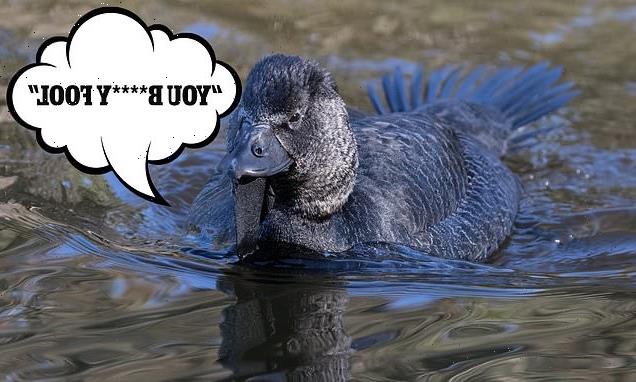 Some Australian ducks appear to be able to mimic human speech and other sounds,  including that of doors slamming, a study has concluded.

In a bizarre audio clip, Ripper — a musk duck raised at the Tidbinbilla Nature Reserve, south of Canberra — can be heard seemingly repeating the phrase ‘you b****y fool’.

Researchers from Leiden University and Australia believe that the vocal waterfowl was mimicking a phrase he heard one of his caretakers utter at some point.

Another recording reveals that Ripper can imitate the sound of the door to his aviary being opened and closed. Both imitations were made during his mating displays.

The findings indicate that musk ducks have comparable vocal learning abilities to other mimics like parrots, European starlings, mynah birds and budgerigars.

The study is not the only one to highlight clever Australian birds in recent weeks — with cockatoos in Sydney having been recorded copying each other’s tricks.

Scroll down for videos 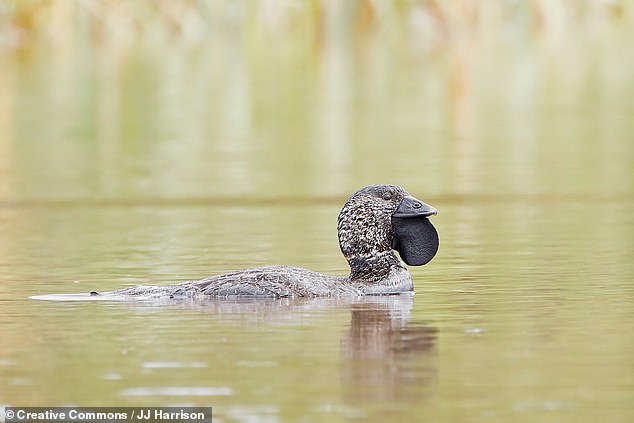 Some Australian musk ducks — like the one pictured — appear to be able mimic human speech and other sounds, including that of doors slamming, a study has concluded

The study was conducted by biologists Carel ten Cate of Leiden University in the Netherlands and and Peter Fullagar, formerly of Australia’s Commonwealth Scientific and Industrial Research Organisation.

‘Acquiring vocalizations by learning them from other individuals is only known from a limited number of animal groups,’ the duo wrote in their paper.

‘For birds, oscine and some suboscine songbirds, parrots and hummingbirds demonstrate this ability.’

(Oscines are a group of some 5000-odd bird species, in each of which the syrinx — the vocal organ, analogous to the human larynx — is developed in such a way that allows for the production of diverse and elaborate bird song.)

According to the researchers, Ripper would issue the sounds in a repetitive series — just like the so-called ‘whistle–kick’ which forms part of a regular mating display.

‘The whistle-kick consists of a non-vocal splash component produced by the feet hitting the water, followed by two distinct vocal components: a soft low-frequency sound followed by a much louder whistle,’ the researchers explained.

The team also reported a case from 2000 of another male musk duck — this one raised by a captive female duck at the Tidbinbilla reserve — being heard to imitate the quacks of Pacific black ducks, also as part of a mating display.

‘The structure of the duck vocalizations indicates a quite sophisticated and flexible control over the vocal production mechanism,’ the researchers concluded.

The observations support the hypothesis that vocal learning in birds evolved in several groups independently rather than evolving once with several losses.’

The full findings of the study were published in the journal Philosophical Transactions of the Royal Society B.

BIRDS USE SONG TO COMMUNICATE WITH OTHER BIRDS

Birds use their voices to communicate with other birds.

Sharp tunes are an efficient way to communicate over long distance, especially when you are small and live in dense habitats like rain forests.

Most bird species use specific calls to identify themselves and to communicate a nearby threat.

Birdsong is a specialised type of call used by many species to help them mate.

Almost exclusively a male activity, birdsong helps the singer to indicate he is fit, healthy and ready to breed.