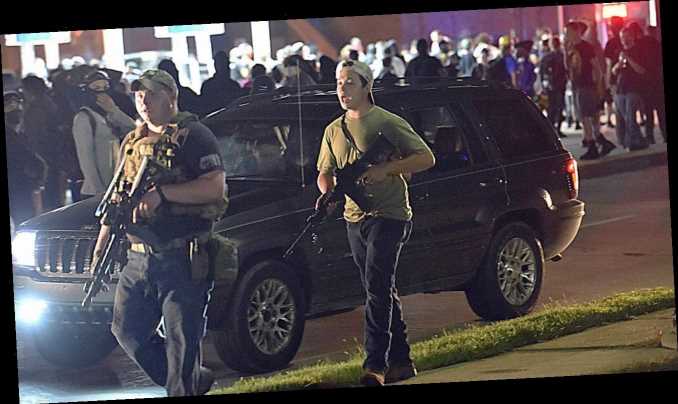 A Wisconsin judge has tightened bond restrictions for Kenosha shooter Kyle Rittenhouse, prohibiting him from associating with white supremacists after he was filmed at a Wisconsin bar being serenaded by members of the white nationalist Proud Boys.

Rittenhouse, who was wearing a T-shirt at the bar reading “Free as Fuck,” was also photographed flashing the “white power” OK sign.

Rittenhouse, 18, has been charged with the fatal shooting of two unarmed demonstrators protesting the police killing of African-American Jacob Blake in August. The teen, who killed the men with an assault-style rifle he brought to the protest, has claimed he acted in self defense.

The Illinois resident was freed from jail in November on $2 million bond in the Wisconsin shootings. The money was raised from sympathetic extremist right-wing individuals and groups.

Surveillance video at a bar in Mt. Pleasant outside Milwaukee showed Rittenhouse drinking and flashing “white power” signs as he posed for photographs after he pleaded not guilty at his Jan. 5 arraignment. He was also being serenaded by a group of Proud Boys who were singing “Proud of Your Boy,” an “Aladdin” song co-opted by the gang as its anthem, prosecutors noted.

The drinking age in Wisconsin is 21, but Rittenhouse could legally drink at the bar because he was accompanied by his mother.

The “defendant’s continued association with members of a group that prides itself on violence, and the use of their symbols, raises the significant possibility of future harm,” Wisconsin prosecutors warned in a court motion earlier this month demanding stricter bond requirements. “Further, this association may serve to intimidate potential witnesses, who may be unwilling to testify in this case because they may fear that the defendant’s associates with harm them or their families.”

The new restrictions, issued Friday, forbid Rittenhouse from possessing firearms, drinking alcohol, or “knowingly” having “contact with any person or group known to harm, threaten, harass or menace others on the basis of their race, beliefs on the subject of religion, color, national origin or gender.”

Mark Richards, Rittenhouse’s attorney, criticized the prosecutors’ motion in a court filing as a “not-so-thinly veiled attempt to interject the issue of race into a case that is about a person’s right to self defense.”

Richards has argued that the teen acted in self defense when he killed Joseph Rosenbaum, 36, and Anthony Huber, 26, and wounded Gaige Grosskreutz, 26, with an assault-style rifle, which was illegal for Rittenhouse to possess in the state. Rittenhouse told police he was guarding a private business during the protest that night. The business owner said he never asked anyone to protect his business.

The Kenosha protests erupted after local police officer Rusten Sheskey shot Blake while responding to a domestic disturbance call. A Wisconsin prosecutor early this month refused to file charges again Sheskey, saying he could not disprove the officer’s argument that he acted in self-defense.