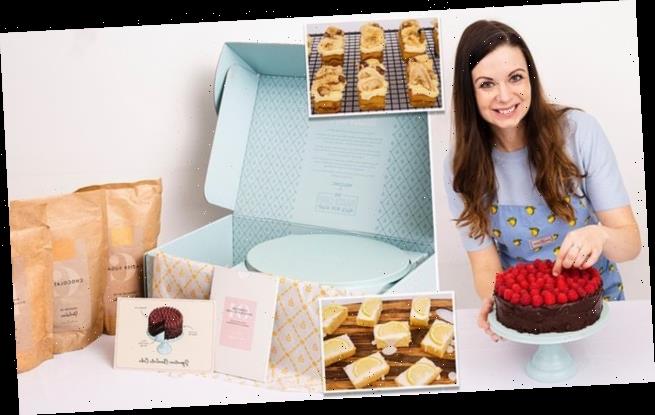 Bake Off or rip off ? The £20 cake kits you have to make yourself: As the celebrity version returns to our screens, SARAH RAINEY tucks into the show’s new recipe boxes

During this pandemic Britons have returned in their droves to their favourite comforting pastime: baking.

Last year we made a billion loaves of bread, while visits to the BBC Food website soared by 74 per cent and The Great British Bake Off enjoyed record-breaking viewing figures in September.

Now, as The Great Celebrity Bake Off is enlivening our Tuesday nights once more, avid bakers can even subscribe to a Bake Off subscription box, 2021’s answer to our obsession with cake.

At long last, after a decade of watching contestants whipping up meringues, cutting out cookies and turning out sensational showstoppers on screen, you too can become a Star Baker — from the comfort of your own home. 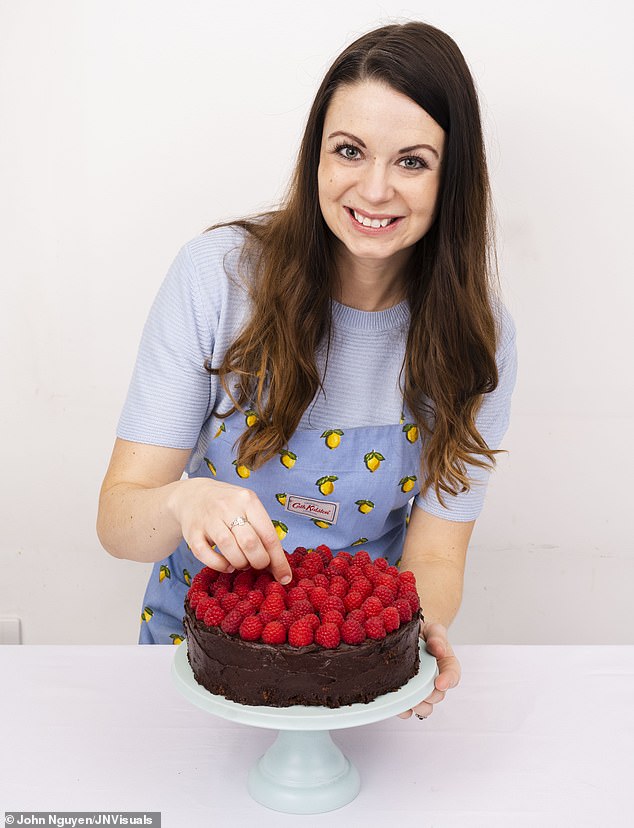 The makers of the beloved series have created a monthly package, containing dry ingredients, a recipe card and a bespoke piece of baking equipment, all developed by experts behind the show.

At £19.99 a box, it’s not cheap, but it’s the closest we home bakers might ever get to that coveted gingham tent, without the stress of competition and those cutting comments from Paul and Prue.

It sounds ideal, and early reviews from former contestants are glowing. Peter Sawkins, the 2020 champion, says he ‘audibly squealed’ when he received the box, which has also been praised by 2020 finalist Laura Adlington, and 2018 winner Rahul Mandal.

So does it live up to the hype? As a lifelong baker who has even made a cake for Mary Berry, I’ve got high expectations to say the least.

To put the recipes to the test, I’m sent three sample boxes. And when they arrive at my door, bearing that familiar logo, it feels as comforting as an old friend.

First up is a signature chocolate cake, swirled with ganache and covered with fresh raspberries, which eagle-eyed fans will recognise from the opening credits of the series.

While the box contains dry ingredients and the recipe, you’ll need your own baking equipment: cake tins, greaseproof paper, wooden spoons, a whisk and weighing scales are a must. 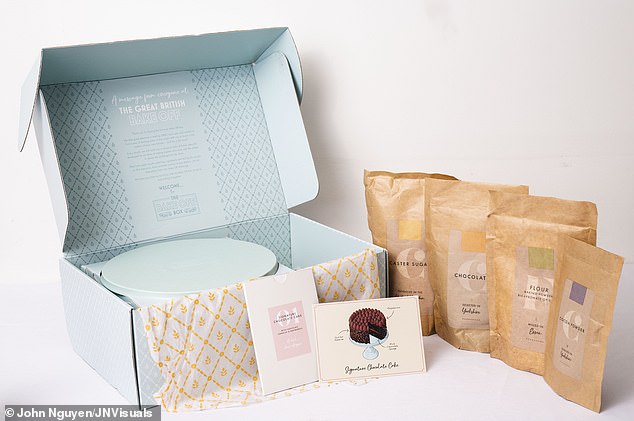 The recipe looks straightforward, and there’s a nice bamboo cake stand included in the box, but I’m disappointed at the long list of extra ingredients I have to source myself — milk, oil, eggs, butter, cream and raspberries — which comes to more than £10.

All that’s in the box is a ‘flour sachet’ containing weighed-out flour, baking powder and bicarbonate of soda, some caster sugar, cocoa powder and chocolate drops, which seems a bit mean.

I start by lining two cake tins, mixing the dry and wet ingredients and then baking the sponge for 35 minutes. Once cooled, I make a ganache — otherwise known as thick icing — from cream and chocolate, and swirl this over the top and sides in an artistic fashion.

All that’s left is to top the cake with raspberries — the recipe says 300g, but I need far more — and marvel at my mouth-watering creation. I last about 30 seconds before digging in. 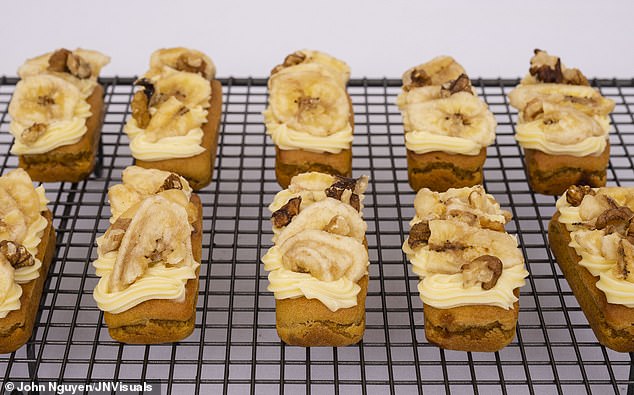 Sarah said her banana loaves didn’t look as pretty as the ones in the photographs, but were full of fruity flavour

While many home bakers might have had their fill of banana bread from the first lockdown, the second box contains the ingredients you will need for a batch of miniature banana and walnut loaves. I get sugar, a flour sachet, icing sugar, dried banana chips and walnuts.

The box creators have also included a silicone tray, which is handy if, like me, you don’t have cupboards full of equipment. This time there aren’t nearly as many extra ingredients for my shopping list — just bananas, butter and eggs — and I get started by mashing the bananas and whisking in the rest of the ingredients.

There are clear, concise instructions and overhead photographs to show what’s going on in the bowl at each stage.

Once baked in the oven for 30 minutes, the loaves are easy to pop out of the moulds and I let them cool before topping with buttercream and decorating with chopped nuts and banana chips. Mine don’t look half as pretty as the ones in the pictures, but they’re full of fruity flavour.

This recipe is for the sort of classic, homely bake Mary Berry would approve of. And although it looks tasty, it’s a little simple for me — I don’t need an expensive subscription to teach me to make a traybake. 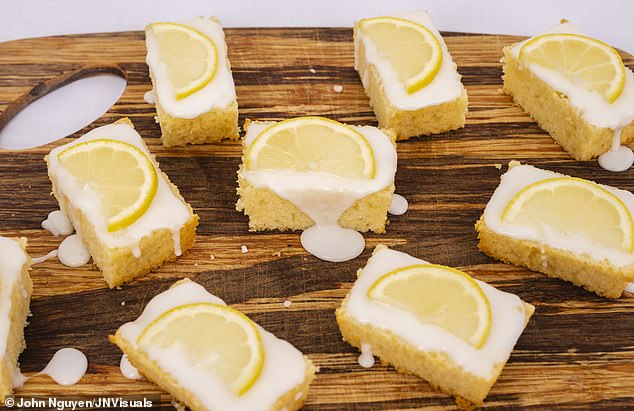 Sarah said the recipe options are all reasonably bland, boring cakes that aren’t great for those with more ambition

The box contains flour, sugar, fondant icing, a pot of lemon curd and candied lemon slices. I stock up on butter, eggs and milk, whisk the sponge ingredients together and use the zester included to grate peel from two lemons. It’s quite a nifty gadget (a similar one at John Lewis is £15), so I feel like I’m getting my money’s worth.

While the sponge bakes, I make a lemony syrup, followed by fondant icing, both of which go on top of the cooled traybake. All that’s left is a few flourishes with some candied lemon slices (also included), and my bake is done. Sharp and sweet, with a crumbly sponge and thick oozy icing, I can’t deny they taste good — but this one’s a bit basic for a Hollywood handshake.

While the Bake Off Box does exactly what it says on the tin by offering simple, speedy and tasty recipes for home bakes, what’s sorely missing is the creativity from the Bake Off contestants, who sadly seem to have had no input in the boxes’ content.

We fans would have relished the opportunity to recreate the dazzling illusion cakes from series eight, or to attempt Nancy’s amazing windmill cake from series five.

Instead, the options are all reasonably bland, boring cakes — presumably intended to appeal to all ages and abilities — but not great for those of us with a little more ambition. Saying that, at a time when we could all do with a bit of cheering up, a delivery of baking essentials to your door each month is a lovely treat.

Is it worth £19.99 a pop? Probably not, but at least you can bake your way out of boredom. And as you still can’t invite friends and family over yet . . . there’s no option but to eat all the cakes yourself.

BAKE IT YOURSELF KITS: BEST OF THE REST

Ideal for grown-up bakers, try your hand at mojito or espresso martini cupcakes with this postal kit. You get the dry ingredients, instructions and extras such as baking paper, as well as membership of an online club with the monthly subscription.

Little Bakers, from £9 a month, littlebakers.co.uk

Designed to teach children to bake, this contains weighed-out dry ingredients, step-by-step recipes and an activity card. There’s no minimum age and the subscription can be paused or cancelled at any time. Previous bakes include monster cupcakes, cake pops and flapjacks.

If I Knew You Were Coming, from £19.99 for 3 months, ifiknewyouwerecoming.co.uk

If you’re keen to master a particular bake, this is the box for you. You can choose from muffins, brownies or cookies — and you’ll get recipes in the post. The box includes everything, except eggs, butter and milk, and suits all abilities.

Honeywell Bakes, from £14.99 a month, honeywellbakes.com

The ingredients arrive in recyclable packaging, and are probably for the more experienced — bakes include pistachio macarons and bao buns, but there are kits for young bakers.

These boxes are for bakers with allergies and are all gluten- and nut-free. You can choose from birthday cake, lemon drizzle or honeycomb crunch as a one-off kit. boxes include ingredients, instructions and a tin.

This box offers American bakes — such as whoopie pies — with a children’s option, extras and a gift. You can order as a one-off or a monthly subscription.

bakeoffbox.co.uk Sign up by April 1 to receive your first box in May.