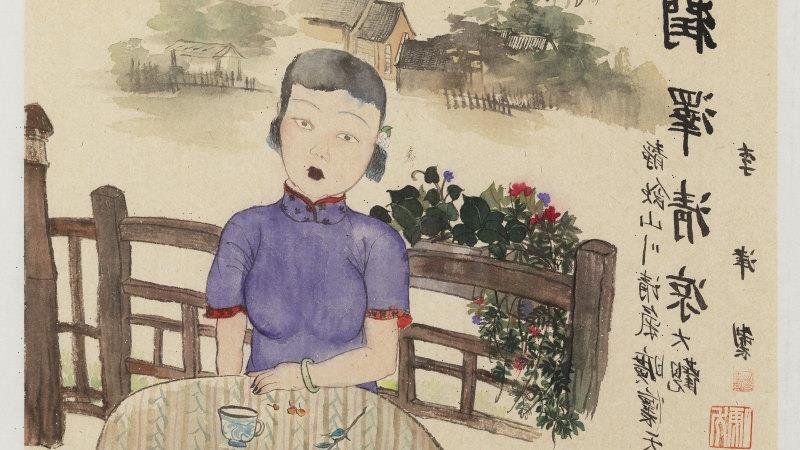 In the Western world, we greet someone with the words “how are you?” but in China they say “have you eaten?” It testifies to the central importance of food in Chinese culture – and perhaps the difficulties of getting enough of it over the past 5000 years.

The Way We Eat at the Art Gallery of NSW is an exhibition devoted to food: to its preparation, storage, enjoyment and over-indulgence. Most pieces are Chinese in origin, covering a time span that stretches from the Neolithic period to the present day. Or to speak in terms of objects, from an earthenware jar from Qinghai province (c.2350-2050 BCE) to contemporary video and large-scale photography.

There’s really no excuse for not seeing this show as it’s been running since April 3 and is set to continue until some unspecified date in the new year. For most of that time, it’s been inaccessible but has outlasted lockdown because it’s drawn from the permanent collection, supplemented with loans from Judith Neilson’s White Rabbit Gallery. 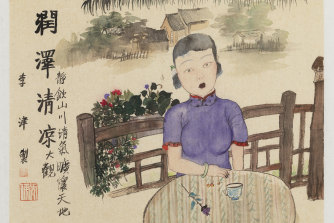 After my first post-lockdown visit to the AGNSW last weekend, I’d recommend visitors wait until the Matisse blockbuster starts on November 20, because a good half of the building remains closed. A supplementary event called Matisse Alive turned out to be another of those patchwork affairs the AGNSW laughingly calls an “exhibition”. It consists of a random selection of abstract paintings hung in haphazard fashion in the main foyer, and a downstairs gallery crowded to the rafters with an equally arbitrary selection of still life and interior pictures. Both displays are drawn exclusively from the permanent collection.

There’s also a group of colourful, simplistic Polynesian textiles and a special focus on works by four female artists: Nina Chanel Abney (USA), Robin White (NZ), Sally Smart (Australia) and one of the AGNSW’s absolute faves, Angela Tiatia (Samoa/Australia). Whatever the virtues of these artists, the connections to Matisse are tenuous. It looks suspiciously like a bunch of things the curators were going to show anyway and decided – for the sake of convenience rather than conviction – to fold them into the Matisse Alive concept. 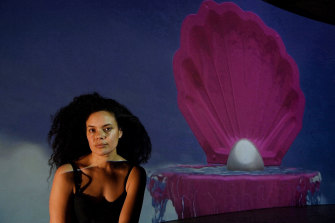 Artist Angela Tiatia in front of her video work “The Pearl” – part of the Matisse Alive exhibition.Credit:Kate Geraghty

The Way We Eat also has a degree of randomness, because “food” or even “food in China” are subjects of encyclopaedic scope. Curator Cao Ying has attempted to impose order by dividing the display into four sections: essential, exchange, excess and enchanted. She has taken this opportunity to showcase areas of the collection such as oriental ceramics and lacquerware that are rarely put under the spotlight, to include new pieces by local Chinese-Australian artists such as Ah Xian, Tianli Zu and Jason Phu, and to acquire works for the collection by contemporary brush-and-ink master Li Jin.

The contents may be diverse but logic is involved. The more spectacular items are displayed in the centre of each room, with small pieces grouped in glass cases around the walls. 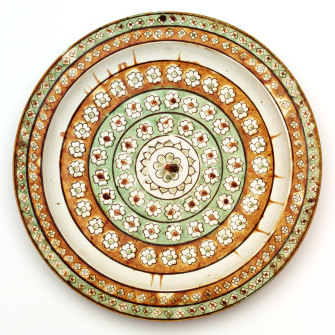 The show opens with Wang Gongxin’s Dinner table (2006), a video of a circular tabletop set for a banquet. We watch as the table is turned, with bottles, plates and implements sent sliding off the edge into the void. It’s a vision of the precarious nature of human life in which feast and prosperity may quickly give way to famine. For the newly affluent Chinese of today, it’s a warning that fortunes quickly won can be just as easily lost – a point being proved by property developer Evergrande – a name that obviously tempted fate. 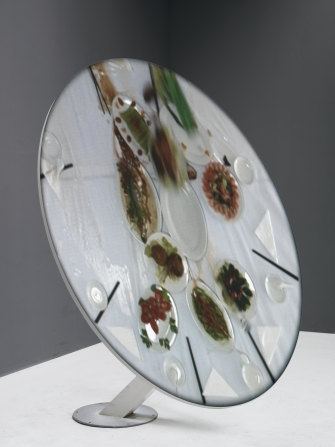 In the first section, essential, the showpiece is Liu Jianhua’s Container series (2009), comprised of a series of pale, porcelain vessels that appear to be filled to the brim with blood. The deep red, however, is but another form of glaze. The vases and plates, rendered dysfunctional, become metaphysical objects – meditations on the beauty and bloodshed contained within Chinese history.

In nearby glass cases, we can examine more straightforward examples of Chinese ceramics such as a Qingbai conical bowl from the Song-Yuan dynasties (960-1366), a graceful object in the most delicate shade of pale blue. 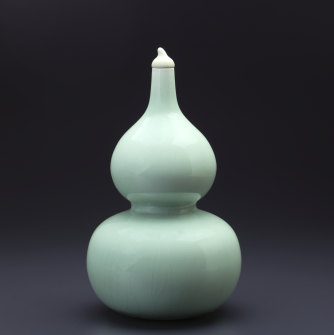 This alternation between beauty and danger is a thread running through the exhibition. Tianli Zu’s Dinner is served (2020) presents another circular tabletop, part projection, part paper cut, in which circles of fruit and vegetables are fed by a ring of syringes. This reflects a genuine concern in China, where genetic modification has seen supermarkets filled with large, perfect foodstuffs found to have little flavour. Zu’s piece acts as a mock-celebration: an elaborate feast made from paper and light.

In China’s overheated economy, the exchange section leads quickly to excess. A classic Chinese banquet, even today, might provide three times as much food as anyone would be capable of eating. The wastage is a sign of your host’s wealth and generosity. To end with nothing left on the table would be viewed as a disgrace. The same thinking applies to the Chinese art market, where nouveau riche collectors are attracted by high price tags rather than quality. For some buyers, it’s a matter of indifference whether a piece is authentic, so long as one can boast about how much it cost.

Guo Jian mocks this culture of excess in his photo-collage Landscape No.1 (2016). What looks like a slightly fuzzy version of a traditional Chinese landscape is revealed on closer inspection to be a mass of tiny celebrity portraits retrieved from discarded wrappers and packaging. Hong Hao does something similar in In My things Tian A (2008), a large panel covered in miniscule photos of confectionery wrappers. In both works the aesthetics of mass consumption create a massive pile of rubbish. 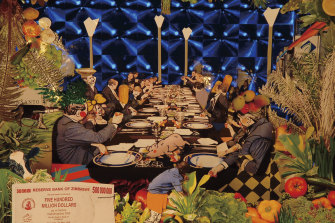 It’s possible to interpret Li Linying’s Opulent banquet (1998-2008) as another symbol of excess, but this giant pile of hand-knitted strawberries represents slow rather than fast food. Strawberries were once rare and expensive items in China but are now widely available. Li’s 10-year project restores value to the strawberries, making them into a unique work of art. 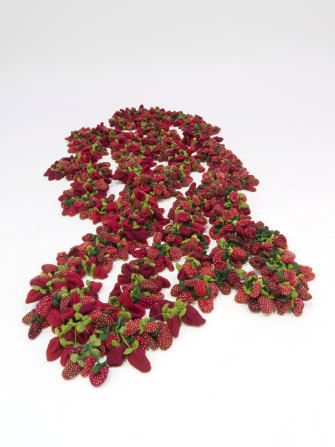 The last part of the show, enchantment, brings together a heterogenous group of works concerned with food’s rituals, rites and superstitions. Ah Xian’s bronze busts with symbolic animals look as if they’ve been taken from a temple devoted to an ancient mystery cult, while Li Jin’s small paintings — except the bizarre Banquet for the times (2020) — present small, psychological dramas enacted around a meal or a cup of tea. In The world is yours, he shows a couple staring, with fish eyes, at a table laden with fish. It’s a reflection on the human condition, as they don’t seem to know whether they’re going to eat or be eaten.

The Booklist is a weekly newsletter for book lovers from books editor Jason Steger. Get it delivered every Friday.