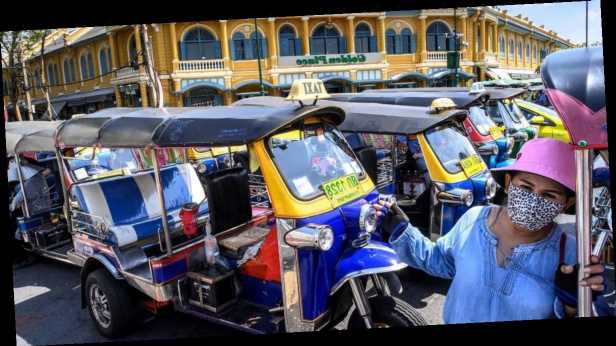 A 43-year-old British businessman tested positive for coronavirus in Thailand, officials have said.

The company consultant traveled from London on February 28. On the way, he changed his flight in Hong Kong the next day.

He arrived in Thailand on February 29 but was feeling sick. He was later admitted to a private hospital on Tuesday with fever and sputum.

He said the patient was being treated at the Central Chest Institute Of Thailand in Nonthaburi, a few miles north of Bangkok.

The ill Brit brings the total number of cases in Thailand to 48 with one death.

Officials have moved to contain the spread by forcing arrivals from six high-risk countries to self-quarantine for 14 days.

The strict measures will see tourists forced to stay in their hotel room, report daily to the authorities and face fines or prison if they breach the rules.

This means that all arrivals from these places, including those that transit through them, will have to provide the authorities with their address and travel plan and be self-quarantined for 14 days.

“Thais and foreigners who came from these places will have to go through self-quarantine for 14 days at home or in a hotel room, where they have to report themselves to the authorities every day or officials will come to check on them,” health ministry spokesman Rungrueng Kitphati said.

Many hospitals in Thailand are still waiting for masks. Commerce Minister Jurin Laksanawisit questioned on Wednesday why many hospitals have not yet received fresh supplies of protective face-masks.

He ordered the Public Health Ministry, Food and Drug Administration and Government Pharmaceutical Organisation to review distribution with the Department of Internal Trade to make sure all hospitals are adequately supplied.