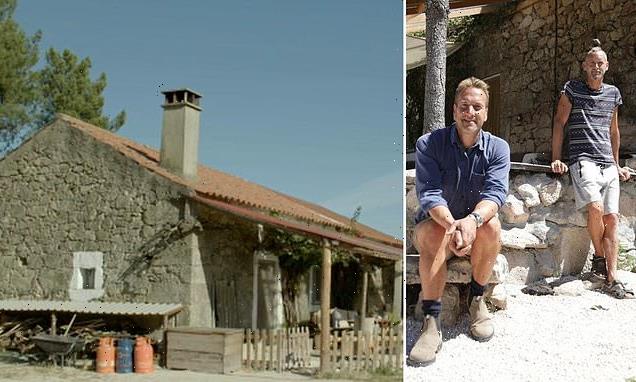 Retail manager, 39, who used to work 120-hour weeks and travelled 45,000 miles in a year reveals why he quit the UK to live a simple life in Portugal on a derelict farm with no running water or electricity

A British man revealed why he quit a successful job that he loved and chose a remote life in the Portuguese mountains as Ben Fogle: New Lives in the Wild returns to Channel 5 tonight.

Alex, 39, bought 35 acres of land for £100,000 in the region of Castelo Branco, in the deserted mountains of Portugal, where it is believed civilians took refuge during the Salazar dictatorship of 1932 to 1968.

Before then, Alex had held a solid position in a retail job that he loved for 16 years, for a boss that he respected. But long working hours and a friend’s suicide in 2013 drove him to quit the role, sell his house in England and look for a happier way of life.

He bought a derelict farm without electricity or running water and full of wasps’ nets two years ago, and him and his dog are living off the sale of his British house and savings, at little costs, and rely on the help of a few locals to survive.

Speaking to Ben Fogle on tonight’s 9pm episode of Channel 5’s adventure show, Alex revealed he was born in the Lake District and had a complicated childhood, marked by the separation of his parents when he was eight and life with an alcoholic mother and an abusive step-father.

Hira, who helps Alex around the farm, believes he belongs to an Alien civilisation living on another planet, who brought him to Earth to ‘seed’ their kind into the human world. 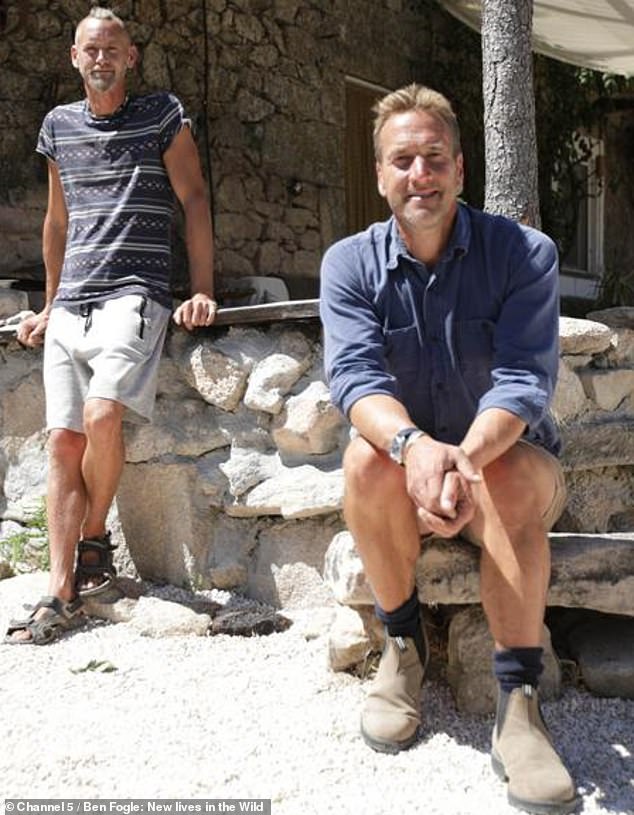 As Ben Fogle: New Lives in the Wild returns to Channel 5 tonight, Ben meets Alex, left, a 39-year-old Brit who left a successful job to move to Castelo Branco, in Portugal

Alex told Ben what drove him to live his good situation in the UK and especially, his job in retail.

‘I was basically running the company. I was the training department manager, the regional manger, I was the retail operations manager and then I was running head of retail for the company,’ he said.

‘It was a massive job but it gave me a platform to do what I loved,’ he explained.

‘I love being creative, I love people. And my boss, he’s a lovely caring man, he’s a very generous man and I wanted to carry on his legacy.’

Alex sold his house in the UK and bought a derelict farm and 35 acres of land for £100,000 in 2019. He’s been living here since and renovating the farm, pictured

However, Alex grew tired of the demands of his job.

And when a friend took their own life, Alex was motivated further to change how he lived.

‘Somebody very close to me decided they had lots of issues in life and things got very hard for them. And they basically decided to take their own life. That really changed me,’ he told Ben.

‘This person meant a great deal to me, it was someone very important in my life. It shocked me, beyond words, beyond anything I can ever imagine.’

The news pushed Alex to re-asses his life.

‘I couldn’t make sense of the world. This job I had been doing for 16 years had changed, I didn’t want to keep move shirts arounds the shop, moving jackets around the shop, and tell people off continuously to live that life, I wanted to be more free,’ he said.

‘I decided to change my life, to reduce the working hours to act enjoy the world.’

In order to do this, he quit his job and set about selling the house he had bought outright with his company shares.

‘I have a little bit of money left to do things and survive. My costs aren’t massive, Not paying much out,’ he told Ben, admitting he could not live in such a way without his savings.

‘I worked really hard, I loved my job at the time, but this is the reward at the end,’ he said.

The 39-year-old does not farm the land he lives on, but lets his 83-year-old neighbour use the field for his goats, in exchange for a friendly conversation, tips, and fresh goat cheese and potatoes.

‘Less work for me, more food for him,’ Alex told Ben.

And while his time is spent working on the farm and the land he looks after, Alex also spends a lot of tie resting, and living close to nature – what he jokingly calls a ‘hippie dippy’ lifestyle. 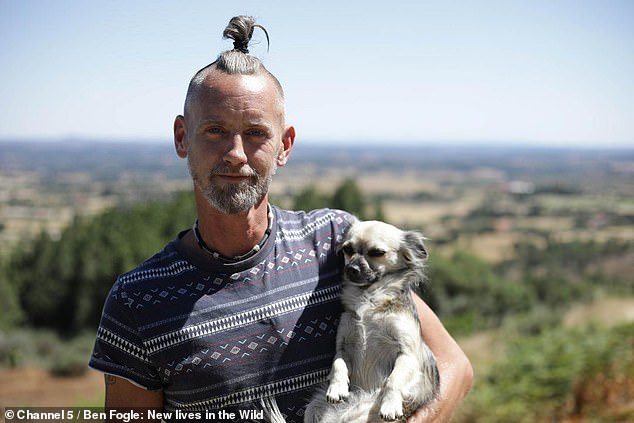 Alex, who lives with his dogs, admitted a friend’s suicide in 2013 drove him to reconsider his career. He decided he wanted to reduce his hours and to ‘actually enjoy the world’

But the British man admitted his life has not always been this simple, and he experienced a traumatic childhood that still haunts him today.

He explained his parents split up when he was eight, and that he lived with his mother, who was an alcoholic.

His mother found a new partner, who terrified him, and he was not happy with ‘a family he didn’t choose.’

Alex told Ben the ‘dynamic’ at home made him uncomfortable, and he ‘removed himself from the situation,’ spending more and more time at his father’s house, who lived ten doors down.

He said he had ‘bad memories’ of his childhood and that he was ‘terrified’ by his step-father.

‘Every time he moved or slammed a door, I’d jump,’ he said.

‘My mum was an alcoholic at the time, so when she would play fight, it would be very aggressive. Tickling would be more like hitting, and she didn’t know, it was just the alcohol,’ he added.

Alex also revealed his mother would trap him in his room if he didn’t do his homework, and that she’d occasionally throw him out of house.

He recounted how, coming from school, he’d find his belongings out on the road.

But Alex said their relationship improved massively when his mother decided to stop drinking,

‘She was an alcoholic and she stopped drinking, she became a grandmother, it was a massive change for her,’ she said.

‘She dropped all the b*******, all the drinking and she became the loveliest woman you can imagine,’ he added.

‘At the same time, she fell ill with cancer. That changes your world again,’ he said.

‘Eight months later she died. It’s harsh, your mum is your world. Her dying… as you can see, it really did affect me,’ he said.

Ben was shaken by the exchange, and said he felt Alex was in need of professional help.

‘I don’t think I met someone who needs a therapist more if I’m honest,’ the presenter told the camera.

‘It’s all very well, coming to a beautiful place like this to seek nature’s therapy, but he himself realises as well that he needs more than just that,’ Ben went on. 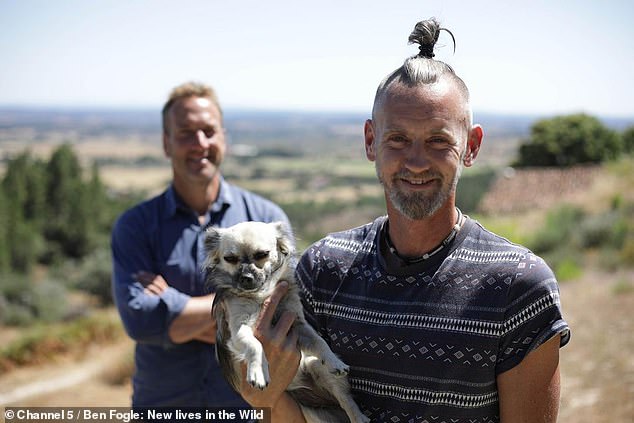 ‘The world is a complicated place right now and he finds himself isolated here,’ he said, adding it was like Alex was ‘stranded in paradise.’

In spite of living in a remote space, Alex is not totally cut out from the world.

He’s met Hira, who stays with him on the farm and wants to turn it into a retreat centre.

The two said they are not in a relationship, and Hira specified she has been celibate for the past three years and a half.

Eventually, after ten days in jail, Hira was released and was only charged with a suspended sentence when it was found she was not responsible for the other person’s death.

After this legal case, Hira moved to India for seven years, where she learned about spiritual healing.

She explained to Ben how her doinatrix work helped her learning new spiritual practices.

‘The work that I did with these people has helped me a lot with my knowledge of the body, because when you can inflict pain, you can inflect healing,’ she said.

‘They always say that in order to go to the light, you have to go to darkness,’ she added.

During his stay, Ben let Hira try sound therapy on him. The healer used pots in order to make sounds around the presenter as he laid on the ground.

While he politely told Hira he did feel like the experiment brought him back to his childhood, he told the camera that it was not a ‘deep experience’ and that spiritual healing was ‘no really my thing,’ even though he was ‘open minded to try different things.

Alex, however, said he enjoys going through spiritual exercises with Hira, and admitted to Ben she believes he comes from an ‘Alien’ planet in the universe, who sent ‘seed people’ to our world in order to populate the world. 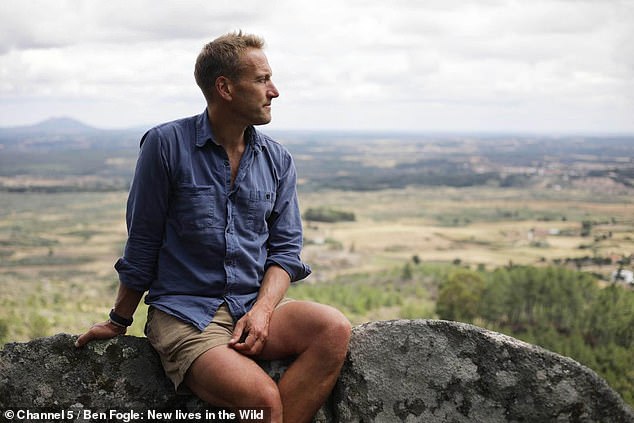 Ben travelled to meet Alex and was struck by how arid the climate was in the mountains, where temperatures can reach 40 degrees during the summer.

Alex explained to him he moved to the farm two years ago, after he fell in love with the land and immediately deciding to buy it.

He admitted the 35 acres had not come cheap, but were still cheaper than a house in the UK.

When he moved into the farm, Alex told Ben there was no door, no windows, no roof, and the rain pierced through the derelict building.

The façade was also covered with low-hanging branches full of wasps’ nest and hornets’ nests.

‘I basically could not get into the building,’ he said, adding he was terrified of wasps.

The farm had no electricity and no running water, but is now fitted with solar panels for energy and a tap alimented with water coming from a stream nearby.

He renovated the house by himself, using recycled material and items of furniture he found in bins.

In total, he estimated that the renovations cost him £2,000, and said he kept things cheap by relying on items that had been thrown away by others.

This rudimentary lifestyle suited Alex, who said he is able to live without constraints and to follow his own rules in the wild.

Ben Fogle: New Lives in the Wild airs tonight at 9p on Channel 5.