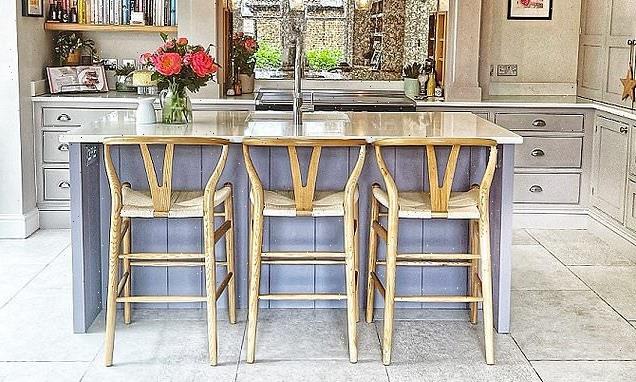 Call to the bar: There are thousands of kitchen stools on the market – but finding the right one can make your head spin

The breakfast bar, the island or, sometimes, the peninsula. Never mind what you call it, this kitchen feature has endured for decades in all manner of shapes and sizes.

As it happens, I’m installing one myself in a little house my wife and I are building in Wiltshire, and it’s proving difficult. Not the house, that is, but the breakfast bar.

The problem has nothing to do with working out how much overhang to have but finding the right sort of stools on which people can sit. 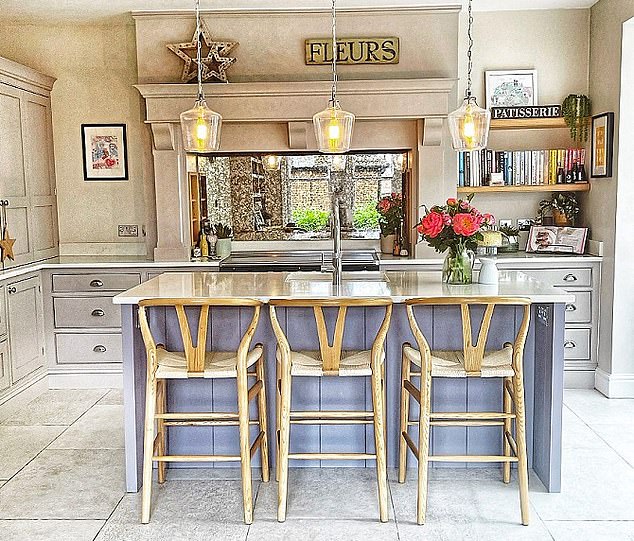 Convivial: The Wishbone Bar Stool, from Cheshire-based firm Where Saints Go, costs £199 each

That means stools which are comfortable without spending a silly amount of money; stylish, but in keeping with the rest of the furniture and colour scheme.

This is usually where John Lewis comes in — and no one relies on this trusty store more than me — but its range of kitchen stools is lamentable.

Most of them look cheap but are expensive, except perhaps for the Philippe Starck for Kartell Masters Bar Chair (pictured in black), which has the advantage of being different and cleverly put together with a twirly back.

But at £296 each you’re talking about close to £1,800 for six. Loaf also does attractive bar stools, which go by the name of Milk because they are ‘inspired by the sort of stool you’d perch on while slurping down a cold milkshake’. Perhaps.

Certainly, they have an American diner feel to them, with wipeable leather seats, soft linen backs and some studied detailing at the front. Crucially, the height can be adjusted. But at £325 per stool, your set of six will come to just under £2,000. 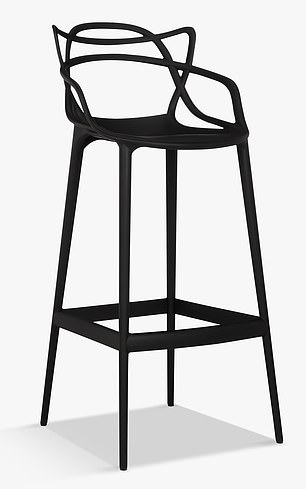 Eventually, my search alighted on a website of which I was not familiar: Where Saints Go. Based in Cheshire, this online-only company is the brainchild of Mark Wilman and his wife Tracey Hague, with a sales strap that reads: ‘Anything but ordinary.’

Its range comprises some 150 options from sexy, slim cocktail perches to sumptuous seats worthy of a long and comfortable evening of eating, drinking and chattering.

‘A lot of our stools are made in India and we go out there regularly to get new ideas… or, at least, we used to go out there a lot,’ says Tracey.

Lockdown has worked to the company’s advantage, with home owners expanding rather than selling.

‘When creating extra space, a new kitchen is often top of people’s list, with an island as a centrepiece, around which people can sit,’ says Tracey. ‘That seems to have happened a lot in the past two or three years, with demand for bar stools increasing in a big way.’

Tracey says a big mistake that’s frequently made is over height. Ideally, there should be 25 cm between the counter and the seat. Most kitchen counters are 90 cm high. Consequently, most of Tracey’s stools are 66 cm high although some are 75 cm.

One of Where Saints Go’s bestsellers is the Wishbone stool, which comes in a variety of colours and is made from ash wood, priced at £199. They have rounded backs that extend to the sides in such a way that you can rest your elbows on them.

The back is sufficiently high so you can lean back without fear of toppling over if you’ve had one too many margaritas.

If you want something more modern, then Wayfair’s Ahlers swivel bar stools, designed by Zipcode, will fit the bill, not least because they cost a reasonable £67.99. ‘With restrictions lifted, we are all on the lookout for ways to make our homes more guest-friendly,’ says Nadia McCowan Hill, Wayfair’s style adviser.

‘If you are running low on extra seating, invest in some statement bar stools, which will make a stylish first impression and can be easily tucked away when the time calls for dancing.’

Sticking with a modern look, Wayfair’s Carwell bar stool, conceived by Etta Avenue, comes in gold and silver. It may be a bit on the bling side for some tastes, and at £289.99 represents a big investment.

Bar stools are mainly bar chairs these days. The kitchen is the one room where people spend almost all their time, with TVs, comfortable seating and dining. Cooking is only a part of the room’s function.

‘The kitchen bar stool has to be more of a comfortable chair that is higher. So think of a normal dining chair, elongate the legs and you have the perfect kitchen ‘bar chair’, says Philippa Thorp, who heads up the Thorp Design company.

A trend is clearly under way. You can expect the choice to widen if this continues, with prices moving in an upward direction.

What your home really needs is a… Big plant

Suddenly size matters in the house-plant style league: the large house plant is back in vogue after several seasons when a proliferation of smaller flora was all the rage, a trend promoted on Instagram.

This forest of small pots requires the constant ministration of its owner, or ‘plant parent’ (this term also started on Instagram). 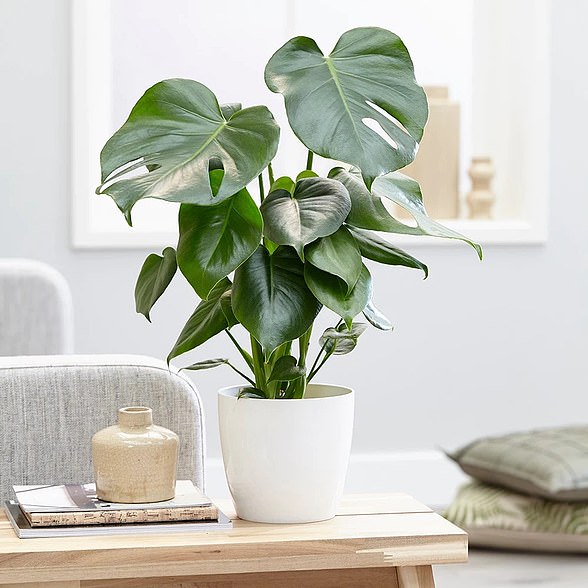 Which is why your home needs the simple elegance of a single tall sansevieria (snake plant), or a lofty lustrous chamaedorea elegans (parlour palm).

A calathea (prayer plant) also adds a hint of the exotic — Marks & Spencer will sell you one in a smart hessian pot for £60 (marksandspencer.com). At Patch, a Kentia palm (Howea forsteriana) costs from £50 to £140, depending on size (patchplants.com).