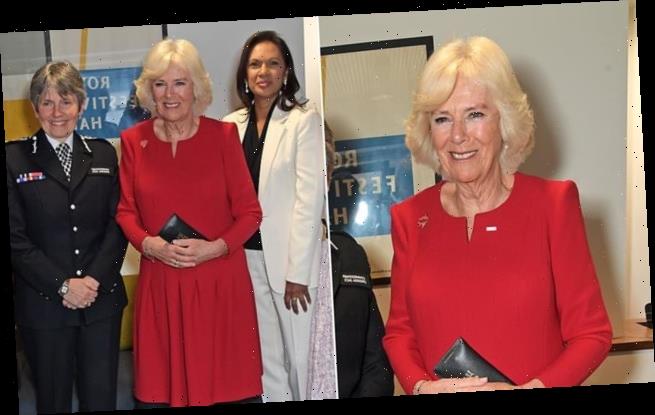 The Duchess of Cornwall has spoken emotionally about friends who have been subjected to domestic abuse in a powerful speech today.

Last month, in an exclusive interview with the Daily Mail, Camilla revealed that she personally knew people who had either been the victims of violence and coercive control at home or had family members who were.

Now, in a keynote address to the Women of the World (WOW) Festival in London, she has talked openly about the issue – and of the ‘corrosive’ affect that the pervading silence around domestic abuse can have.

She said: ’I find it almost impossible to think that any friend of mine might be living under that horrific threat, without my knowing it, but that is the power of coercive control and violence in the home. 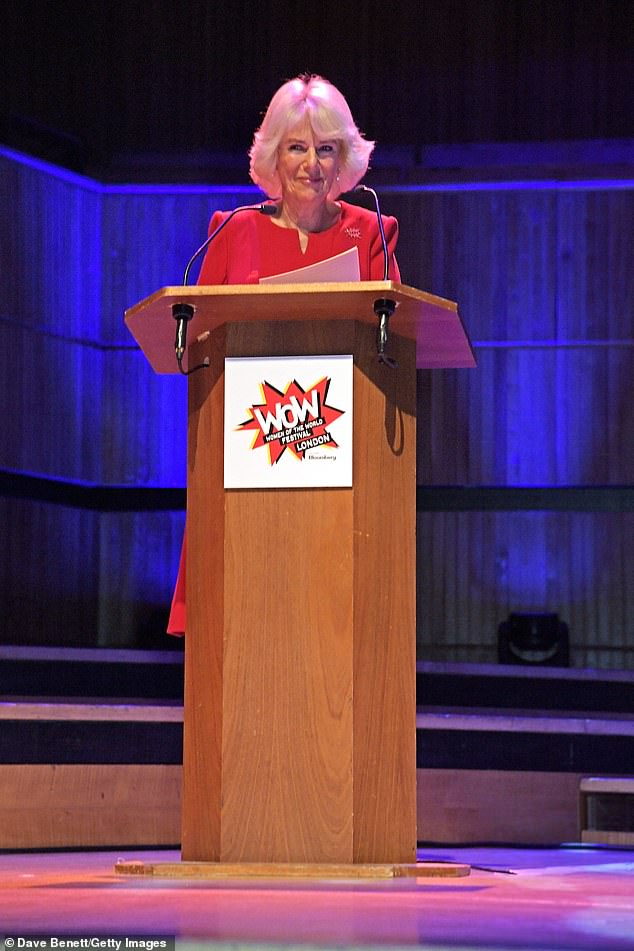 The Duchess of Cornwall has revealed her shock at discovering friends have been under the ‘horrific threat’ of domestic abuse, during her keynote speech at Women of the World Festival 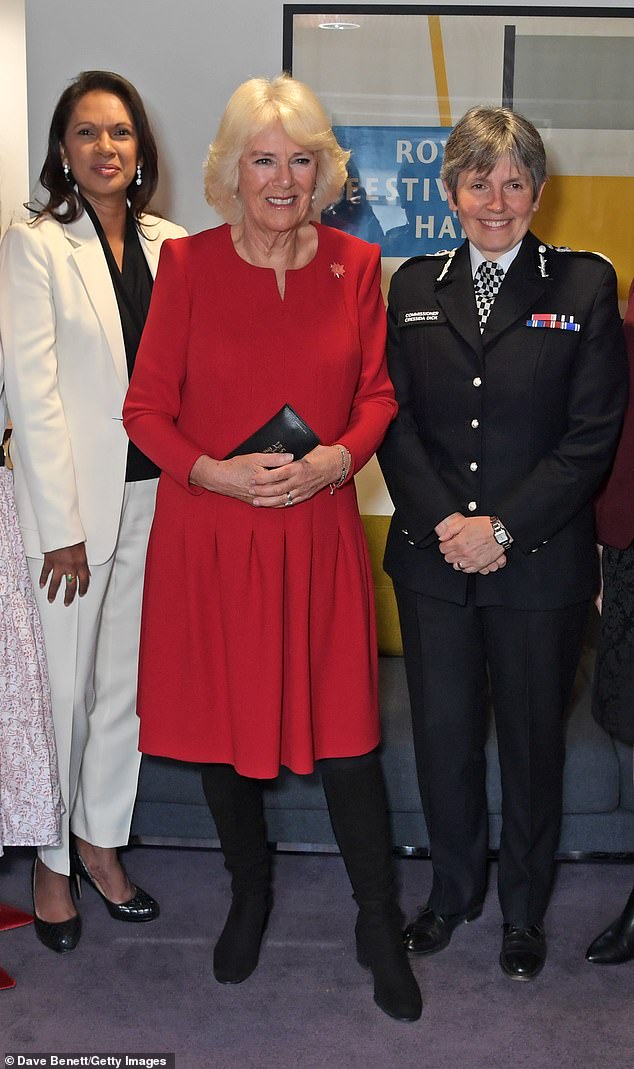 The Duchess of Cornwall sported a bright red dress as she joined campaigner Gina Miller and Cressida Dick, the Commissioner of the Metropolitan Police to attend the opening of the WOW Women Of The World Festival at the Southbank Centre in London today. 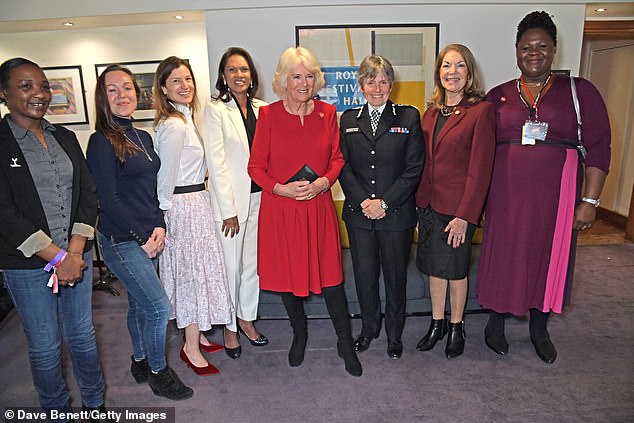 Speaking at The Royal Festival Hall, Camilla, dressed in brilliant red, told her audience: ‘Charity begins at home. But so does domestic violence.

Camilla, 72, decided to make the issue of domestic abuse a cornerstone of her public work after visiting the charity Safe Lives in 2016 and meeting women such as Rachel Williams, who was physically and mentally abused by her former husband, who eventually tried to kill her by blasting her in the legs with a shot gun.

He later took his own life, as did their youngest son, Jack, who struggled to come to terms with the trauma.

In her exclusive interview with the Daily Mail, which has supported her efforts for the last four years, Camilla revealed last month that she has friends who have been victims of violence and coercive control and says: ‘No one knows what goes on behind any front door.

‘Charity begins at home. But so does domestic violence.

‘Three-quarters of violence against women happens in a place where a woman should feel safest – her own home. And just imagine: one in four women in this country will suffer domestic violence in their lifetime. One in four.

‘Through my work, I have talked to many women who have lived with coercive control and domestic violence and, thankfully, come out at the other end as the victors not the victims. They are some of the bravest people I have ever met. Their stories are harrowing and have reduced even the toughest of their listeners to tears. That is why it is so vital that these survivors should no longer feel any shame or any blame. ’

Camilla welcomed new laws to protect women but said there also needed to be a sea-change issue in attitudes to the issue, saying: ‘We all welcome the new laws on coercive control, but laws alone cannot change behaviour. The dial is moving forward, but last year, two women a week were killed by a current or former partner in England and Wales alone. Domestic abuse has devastating consequences on millions of lives. We are in 2020, and still these abused people all over the country cannot feel secure and safe at home.

‘What can be done? We must bring this taboo subject out in the open and talk about it. We all need to understand what coercive control is, how insidious it is, and how often it leads to repeated violence. At a recent SafeLives event, Suzanne Jacob said “we need to change the conversation from, ‘Why doesn’t she leave?’ to ‘Why doesn’t he stop?’”. How right she is.’

The duchess acknowledged it was a ‘complicated issue’ but said society still needed to play its part and teach young people to develop mutually respectful relationships from an early age.

She said: ‘We need to acknowledge that society also plays a part. Maybe it’s too simplistic to say that it fosters a culture of violence and early sexualization. But the society in which we live is the backdrop for our behaviour. Young people don’t set out to become abusers. We need to teach our young men and women what healthy and loving relationships are, and that it is never ‘OK’ to treat anyone with less than respect.

’The campaign to end domestic violence needs the voices of men as well as women, challenging the cultural, economic and political context in which we all experience the world. e will all benefit from building a society which will simply not tolerate this heinous crime any longer. ’

To aid her message, Camilla revealed she was launching a new social media hashtag #everyonesproblem

She revealed: ‘On this tenth anniversary, as WOW’s proud President, it’s a huge pleasure to be here today. But I’m also here as a woman in her seventies, who, as a somewhat ancient technophobe, is not always familiar with some of the jargon younger people use today, but I do know about ‘hashtags’! And now I am using my very first one: #everyonesproblem

’Domestic abuse is everyone’s problem and the solution must be too. ’

‘It affects everybody. It doesn’t matter who you are. That would be my message to people: whoever you are, wherever you are from, there are organisations that can help you. Go and get help. Talk to them, just get up and talk about your experiences. They will help.

She also referred to someone she knows well who confided in her about their own problems.

She said: ’Somebody I know well, whose daughter was married and living in a foreign country. I said to her one day “You’re not looking quite right, what’s wrong?” 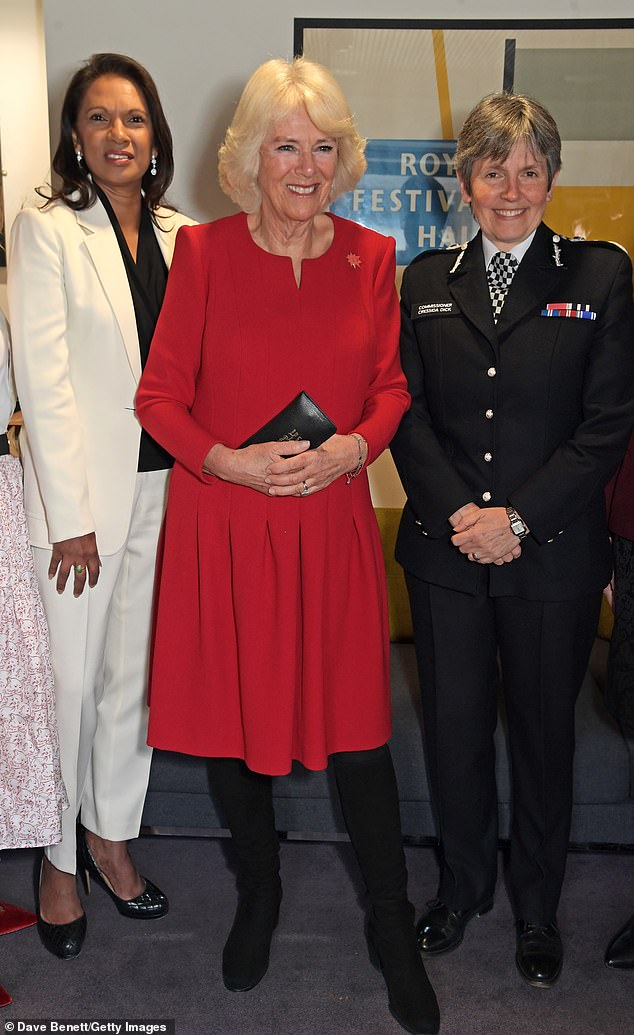 The WOW Foundation launched in 2011, and is an independent organisation working towards the advancement of women’s rights. Camilla, the Patron, is pictured here with Gina Miller (left) and Cressida Dick (right)

‘She said “I have this terrible problem with my daughter. I can’t believe it as I have never experienced anything like this before. She’s got this strange husband who is exercising coercive control which is undermining her confidence, getting rid of her friends, alienating her family. I just don’t know what to do about it”.

‘The fact I knew a little bit about it meant I was able to put her in touch with people who could help.’

At least two women are killed each week in the UK by current or former partners and more than two million report domestic abuse each year – a figure many experts believe is only the tip of the iceberg.

Metropolitan Police Commissioner Cressida Dick, who was at today’s event, praised the duchess for speaking out on such a difficult issue. She said: ‘It’s incredibly important that we have the interest the duchess shows. She has a really deep understanding of the issue and clearly cares. 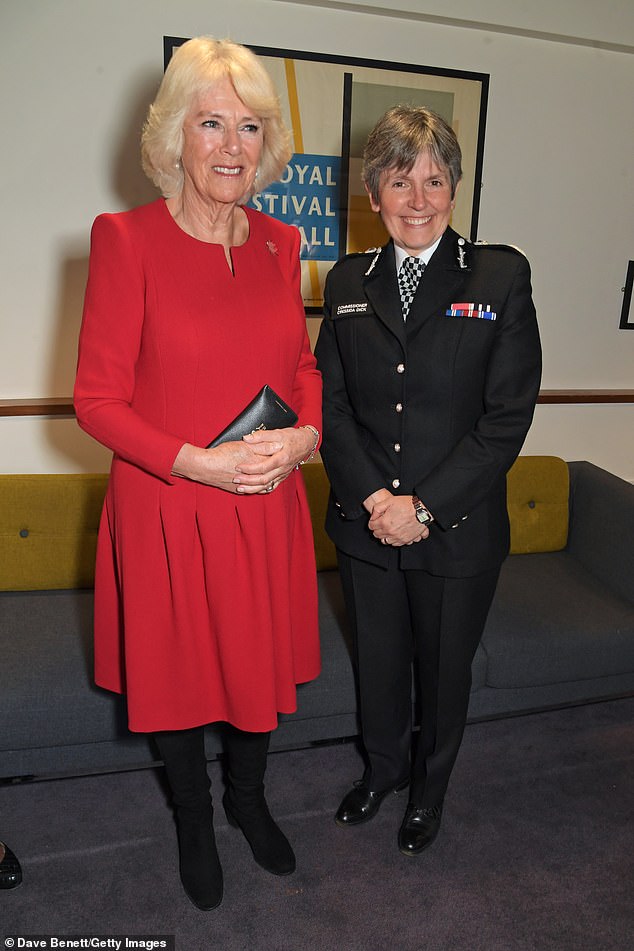 ‘Domestic violence isn’t always the most fashionable subject to talk about and it can be very difficult to get organisation onboard to support . Issues where women are morethe victims of crime than men domestic violence, human trafficking, sexual violence, people feel uncomfortable. ‘This is an issue that affects all areas of society.

We have come a long way. We are a lot more open now about talking about it. But people still find it hard to talk about it. They are concerned about the affect on their family, on their children, if they do something about it. Many people will put up with huge amounts of abuse before they will reach out for help. Sometimes people still love the person they are with even though they are abusing them. It’s very, very complicated.

‘I’ve been a police officer now for many years and I cannot tell you how much things have changed in terms of approach in terms of the law. But it’s still a big part of our work, unfortunately. It can still be hard to investigate. It might be fairly obvious who has done it but actually proving, for example, coercive control can still be difficult, particularly with victims who need help but don’t particularly want to go through the criminal justice system.

‘I am proud of the service that we do provide and the officers are incredibly passionate about this issue. But the thing is that it is a problem for society. Well done her Royal Highness, is all I can say.’

Susannah Jacobs, chief executive of Safe Lives, said the impact of the duchess’s interview with the Daily Mail had been extraordinary. she said: ‘We have had people from absolutely everywhere, particularly survivors, literally all the corners of the globe, getting in touch to say how much it meant to them and how touched they were by the fact that she keeps raising this issue and the warmth she shows to survivors.

‘They were also very moved by the candour she had in saying she knew people who have experienced the same. It speaks to women who maybe feel that they are not allowed to say this is happening to them.

‘But as she said, there is no front door behind which this is not happening. It meant a great deal to people for her to highlight that. It widens that space for conversation. It was just huge. ‘ 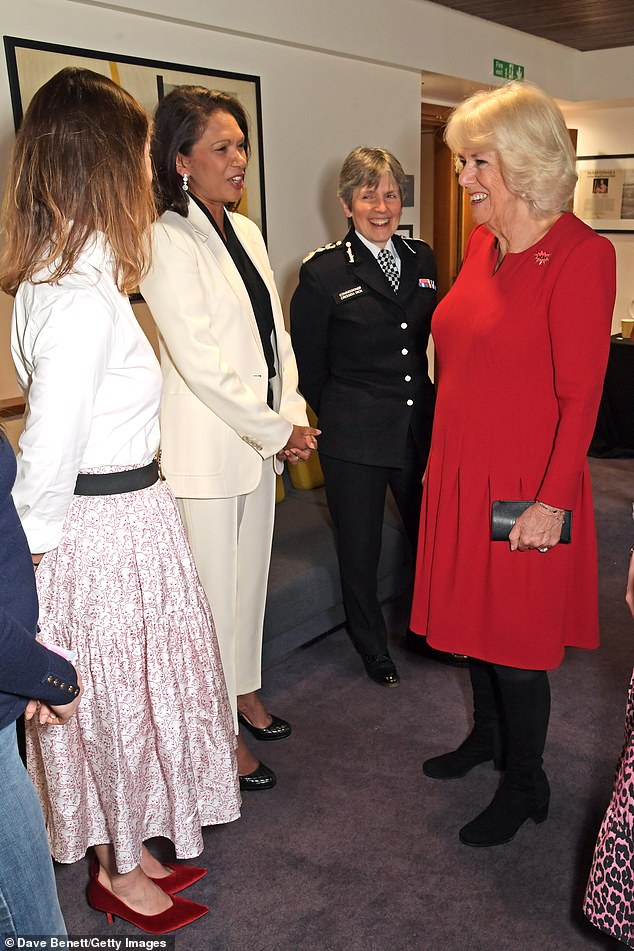 Meanwhile, Cressida was in her full police uniform while Gina opted for a white suit and black heels

The WOW Foundation launched in 2011, and is an independent organisation working towards the advancement of women’s rights.

Camilla has been patron of the festival since 2015 and often appears at the event, which usually coincides with International Women’s Day.

The global festival celebrates women and girls, and looks at the obstacles that stop them from achieving their potential.

Also in attendance was Naomi Donald and Suzanne Jacob, who are both campaigners against domestic violence, Celia Peachey, an artist, as well as Sheila Gewolb, an activist, political campaigner Gina Miller, and Daniella Jenkins, WOW’s executive director.

In the past years, big names including Annie Lennox, Charlotte Church, Cherie Blair and Edward Enninful have attended the festival. 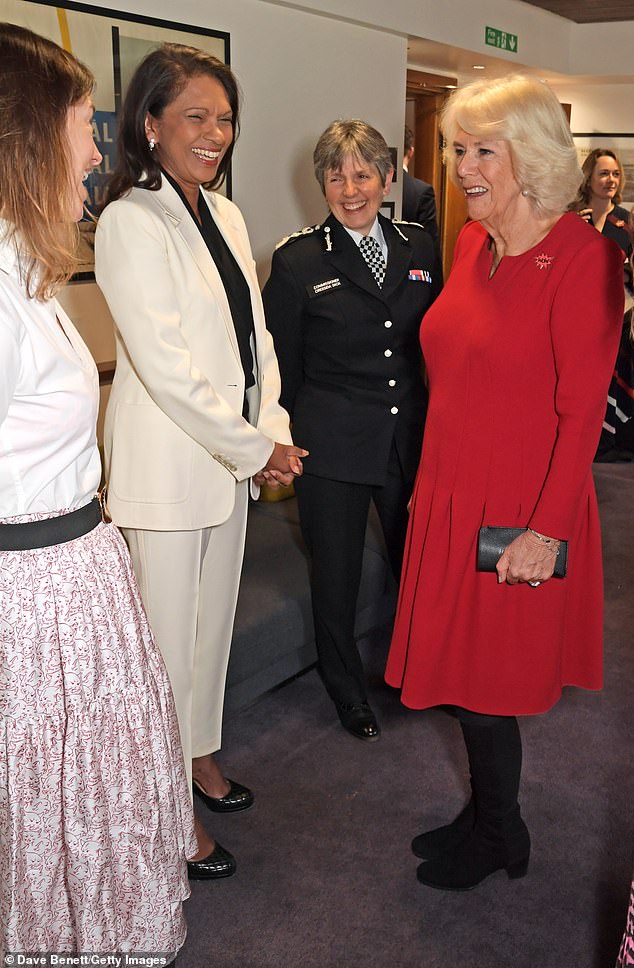 All smiles! The group of inspiring women were all laughs and jokes as they mingled at the opening of the event