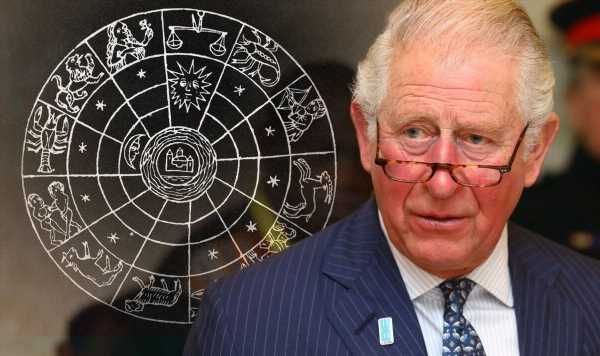 King Charles III  became monarch immediately after Queen Elizabeth II passed away, so his coronation will be more of a symbolic event. Astrologer Jessica Adams spoke exclusively to Express.co.uk about what the stars have in store for the momentous occasion.

Jessica pointed to the Mercury Retrograde as a sign that Charles’ coronation plans will go awry.

Mercury Retrograde is an optical illusion in which the planet Mercury looks like it’s moving backwards from earth.

According to astrology it may lead to difficulties in communication and expression.

The coronation also comes at a time of extreme turmoil for the Royal Family, the astrologer predicted.

She noted that it will take place on Harry and Meghan’s son Archie’s birthday.

As well as being in Mercury Retrograde, Jessica pointed out that the coronation also falls on a Full Moon, which could also cause some trouble.

Indeed, the words lunacy and lunatic stem from luna – the Latin word for moon – as it is believed that people were more likely to show erratic behaviour during a full moon.

She claimed: “It is far from auspicious, if it ever comes to pass at all.”

The coronation will also conjure up major issues for the rest of the royals, Jessica claimed.

“The Royal Family is walking into a crisis not possible in 248 years from March 2023 which involves the younger generation; the line of succession. The United Kingdom will be far from united then.

“The United Kingdom horoscope echoes this problem with the younger members of the House of Windsor; the junior line of succession, in a clash between Pluto in Aquarius and Jupiter in Leo, the royal sign, unfolding from March 2023.”

Two young royals will be affected more than others – Princess Charlotte and Prince George, but not young Prince Louis.

“This is a historic difficulty for The Firm not possible in a quarter-century as 2024 will show.”

According to the astrologer, the fate of the Royal Family is far from secure.

She claimed: “It also involves the horoscope of the late Queen, so spring 2023 at Buckingham Palace suggests a difficult moment of truth for the UK as a constitutional monarchy.

“Currency and the royal finances will be involved; possibly taxation or property.”

As for brothers Prince William and Harry, Jessica predicted some tension around the coronation date.

“Prince Harry will find himself in a clash of wills, possibly literally, as Wills (William) or the last will and testament of one or more royals will be involved.”

This is due to take place as early as March or April, claimed the astrologer.

Jessica concluded: “Prince Andrew’s horoscope also ties in, so this is about the whole dynasty.”