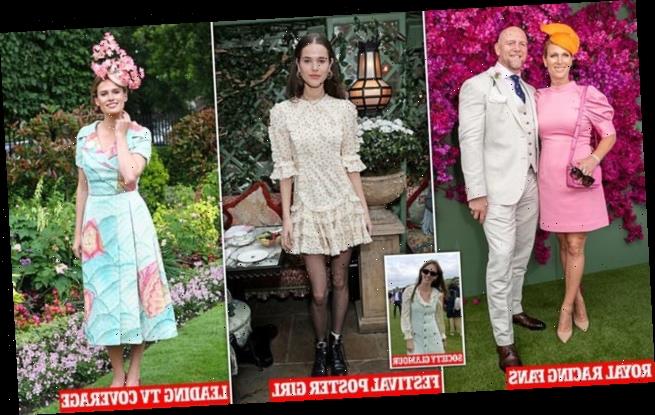 The REAL runners and riders of the Cheltenham Festival: Royals and aristocrats prepare to add a VERY glamorous touch to the famed racing meet as it gets underway today

Horse racing fans from across the UK will have their eyes on the Cheltenham Festival as the hotly-anticipated four-day meet kicks off today.

But while the action on the track is front and centre at the racecourse itself, for viewers watching from home – or reading about it after the fact – there is also interest in the high-profile race fans you might spot in the stands.

Here, FEMAIL reveals the society beauties, TV stars, royals and models you might see wandering through the grounds – or popping up on social media feeds – in their race day finery…

WHO IS SHE? Granddaughter of the Queen’s former racing manager; the first ever Cheltenham Fesitval fashion ambassador 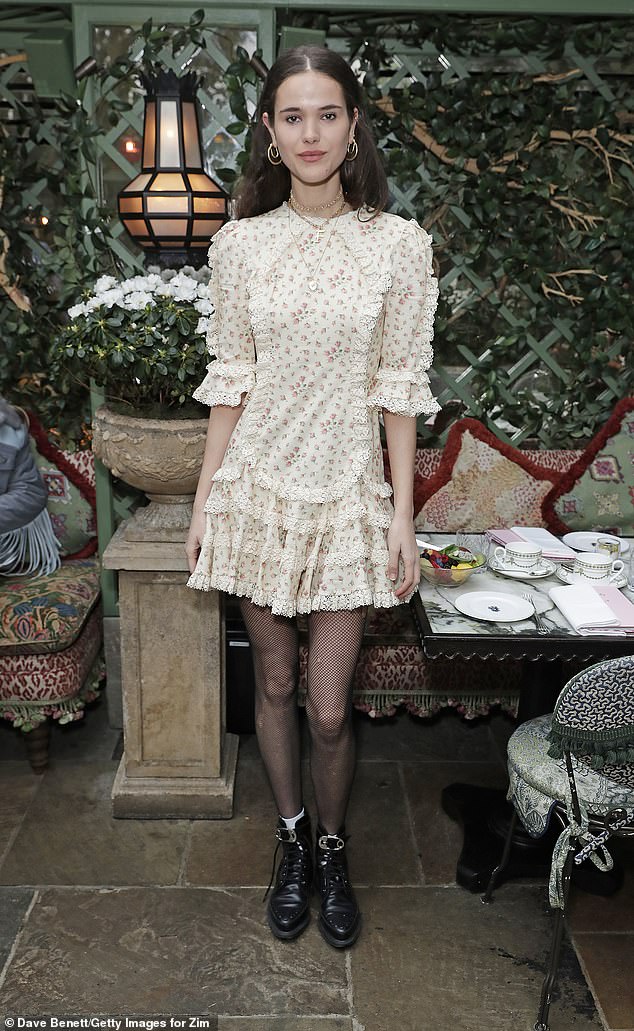 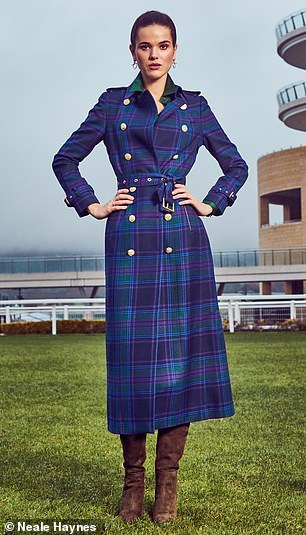 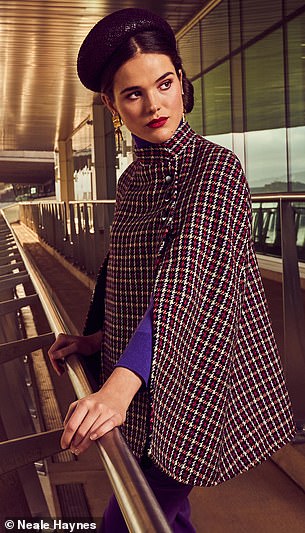 Fashion frontrunner: Frankie, pictured left and right in promotional images, is set to put her own mark on the racing world when she makes her high profile appearance this year

Model Frankie Herbert, 24, is the granddaughter of Lord ‘Porchie’ Porchester, the 7th Earl of Carnarvon, whose close relationship with the Queen is fictionalised in Netflix’s The Crown.

Her father, Harry, runs Highclere Thoroughbred Racing, one of the largest racehorsing agencies, while her uncle is George Herbert, 8th Earl of Carnarvon, who owns Highclere Castle, best known as the real-life Downton Abbey.

Now Frankie is set to put her own mark on the racing world after being named by the Jockey Club Cheltenham as the first ever fashion ambassador of The Festival.

Frankie, who has modelled for leading fashion houses including Dolce & Gabbana and strutted her stuff in front of the Queen at Richard Quinn, will make an appearance on the second day of the festival.

The style-savvy socialite will make a statement in a suit by The Deck.

WHO ARE THEY? Sports power couple; daughter and son-in-law of Princess Anne 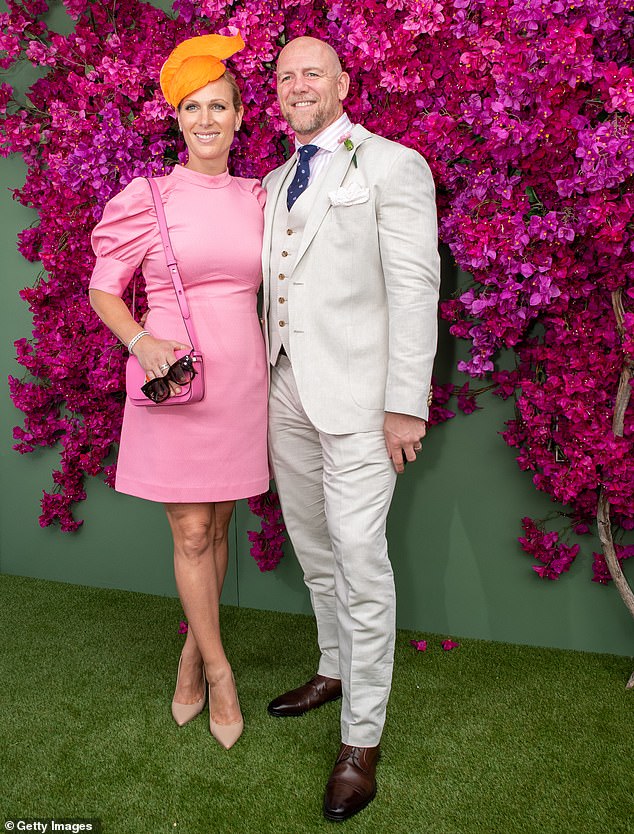 Royal racing fans: Zara and Mike Tindall are sure-fire bets to attend the Cheltenham Festival, which is held less than an hour’s drive from their home on Princess Anne’s country estate

All-round sports fans Zara and Mike Tindall are sure-fire bets to attend the Cheltenham Festival, which is held less than an hour’s drive from their home on Princess Anne’s country estate of Gatcombe Park, Gloucestershire.

Both keen horse racing fans, Zara and Mike make a point of attending events throughout the year.

Equestrian Zara, who has represented Team GB and continues to compete, inherited her love of horses from her mother and grandmother, the Queen.

The couple are understood to have passed their love of horses onto their daughters, Mia, six, and Lena, two, who both ride.

WHO IS SHE? Horse racing commentator for ITV; daughter of acclaimed Italian-born trainer Luca Cumani

Francesca Cumani will be trackside throughout the Festival as she leads live TV coverage of the action.

Francesca is the daughter of two-time Derby winning trainer Luca Cumani and counts Zara Tindall among her close friends.

WHO IS SHE? Model, columnist, second daughter of the Duke and Duchess of Rutland 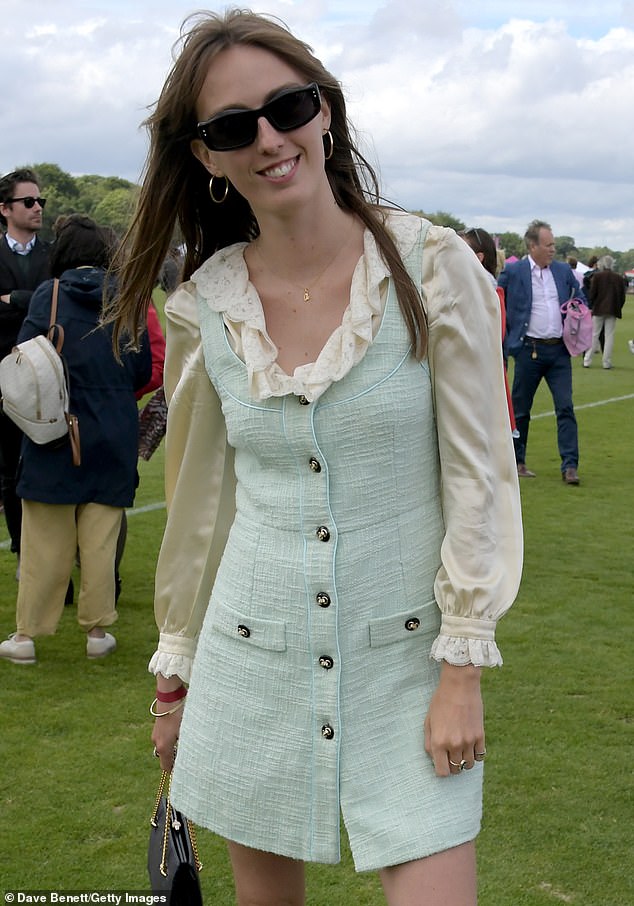 Society beauty: Lady Alice Manners, 24, is the second child of the Duke and Duchess of Rutland, and a regular Cheltenham Festival attendee. Pictured, at the Queen’s Polo Cup 2019 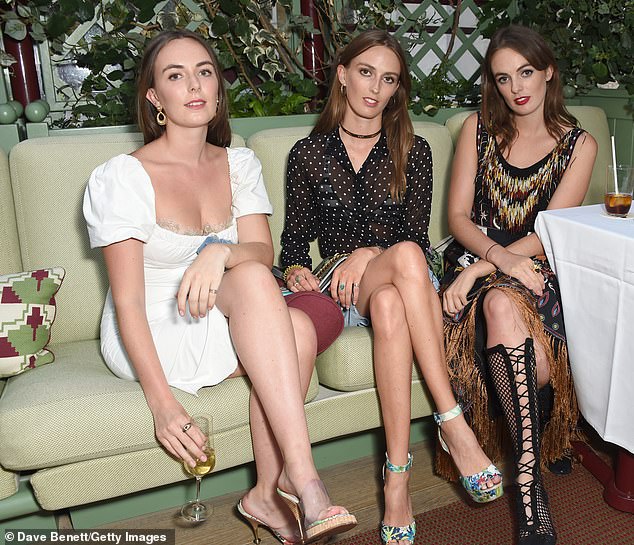 Lady Alice Manners, 24, is the second child of the Duke and Duchess of Rutland, and a regular Cheltenham Festival attendee.

Known for her stylish fashion choices, Lady Alice told the Daily Telegraph how comfort reigns supreme when it comes to putting together an outfit for the often wet and windy festival.

‘You really need to remember practicality so I always wear a polo neck because for me warmth is paramount- and you also really need a good umbrella,’ she told the newspaper.

‘Ultimately, you’re there to have fun and that is impossible to do when you’re freezing. You’ll still be able to look great.’

This year Lady Alice will be wearing a suit by The Deck for the Cheltenham Festival.

WHO ARE THEY? Founders of Hicks and Brown, a country label loved by Kate 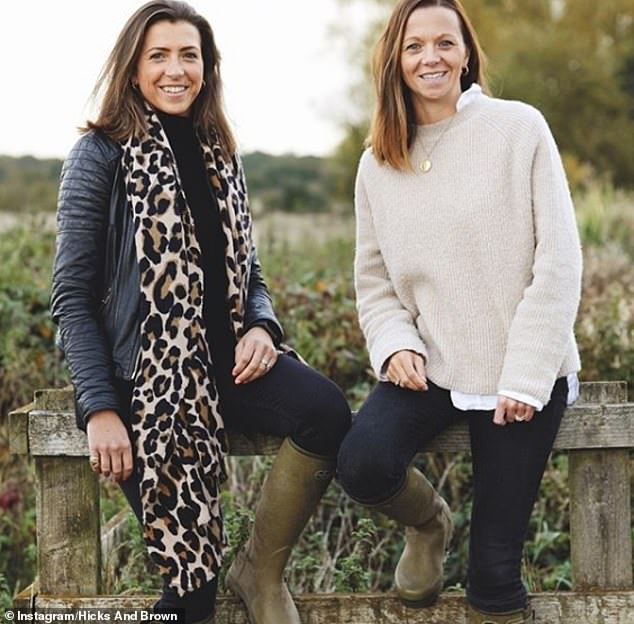 Style mavens: Alice Leet-Cook and Rosie Turner are behind country label Hicks and Brown, a Cheltenham favourite which specialises in creating ‘timeless hats hand-finished with feathers’ 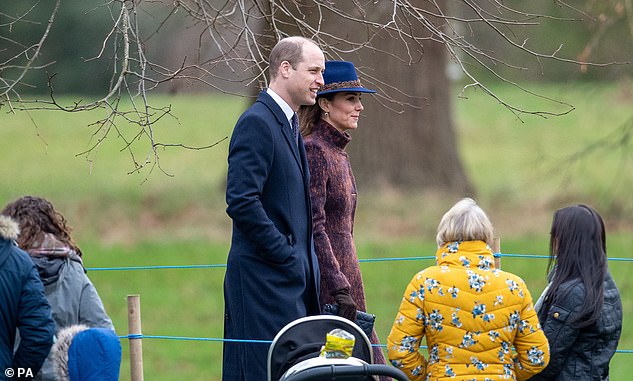 Royal fan: The brand enjoyed a major moment in the spotlight in January when the Duchess of Cambridge, 38, wore one of their designs to church at Sandringham, pictured

You might not recognise these talented sisters’ names but you certainly will have seen their brand if you’ve been to a recent race meet.

Alice and Rosie are behind country label Hicks and Brown, which specialises in creating ‘timeless hats hand-finished with feathers’.

The blend of practicality, style and comfort makes Hicks and Brown hats a popular choice for Cheltenham Festival racegoers – and the sisters could just be there to take in the action, too.

The brand enjoyed a major moment in the spotlight in January when the Duchess of Cambridge, 38, wore one of their designs to church at Sandringham.

WHO IS SHE? Lucinda Ponsonby, wife of Rupert Ponsonby, 7th Baron de Mauley and the Queen’s Master of the Horse 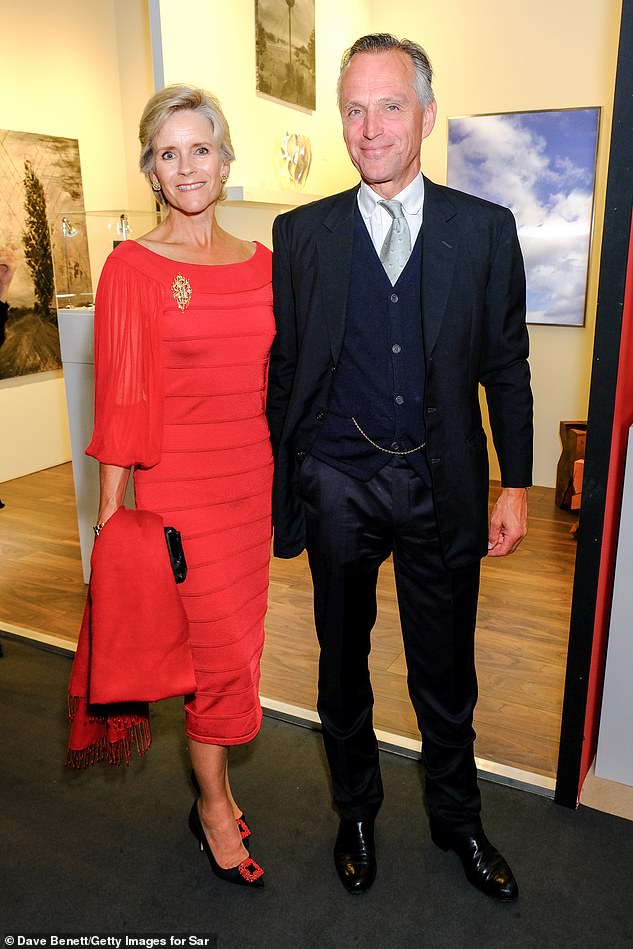 Well-connected: Lucinda Ponsonby, wife of Rupert Ponsonby, 7th Baron de Mauley and the Queen’s Master of the Horse. Pictured, the couple at an event in London in September 2019

Among the lesser-known names on our list, but Lady de Mauley wields serious clout in the world of horse racing.

Lady de Mauley, or Lucinda to her friends, is the wife of Rupert Ponsonby, 7th Baron de Mauley, who was appointed the Queen’s Master of the Horse in 2018.

The role came into effect last year and the couple immediately saw the benefits: they rode with the Queen’s cousin, Prince Michael of Kent, and his wife, Princess Michael of Kent, in the royal carriage procession at Royal Ascot last year.

Lady de Mauley stood out from the crowd at Cheltenham last year, donning a vibrant orange coat and a leopard print hat.

WHO IS SHE? Businesswoman; wife of former jockey Sir Tony ‘AP’ McCoy

Racing royalty: Businesswoman Chanelle McCoy is an entrepreneur and wife of former jockey Sir Tony ‘AP’ McCoy. She stands out in vibrant outfits (seen in 2018, left, and Cheltenham 2019)

As a busy working mother-of-two, star of Ireland’s Dragon’s Den and wife of celebrated former jockey Sir Tony ‘AP’ McCoy, glamorous Chanelle McCoy would do well to squeeze a trip to the Cheltenham Festival into her busy schedule.

The stylish businesswoman is a regular fixture at the festival and last year attended alongside her close friend Zara Tindall and her friend Dolly Maude, who was bridesmaid at Zara and Mike’s 2011.

Ever stylish, Chanelle should be easy to spot if she is in attendance as she favours outfits in bold, eye-catching hues.

… And the celebrities you might spot cheering from the stands 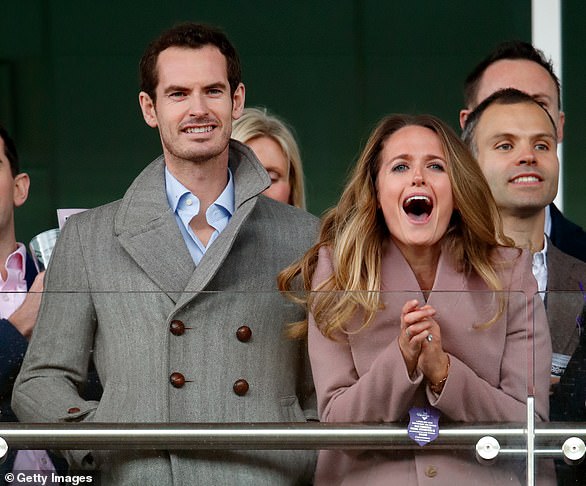 Murray mania! Andy and Kim Murray were spotted in the stands at Cheltenham 2019 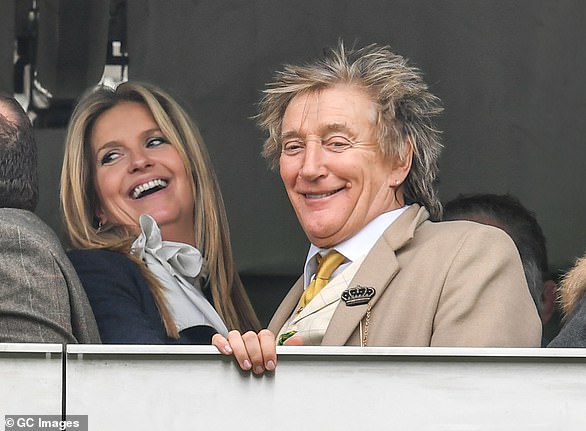 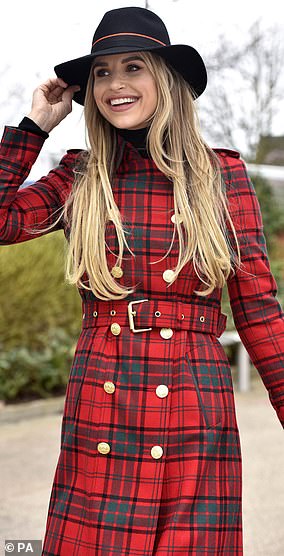 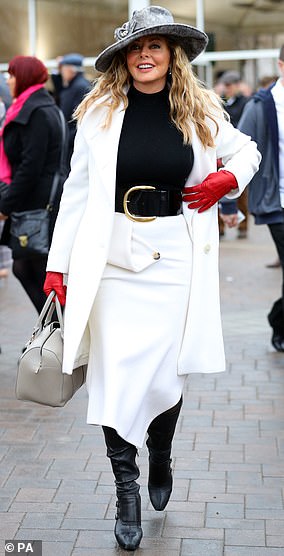