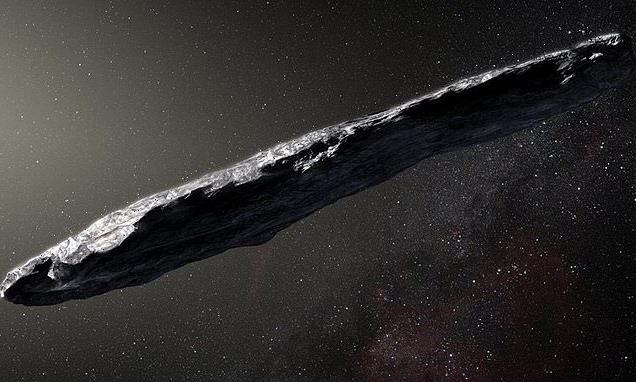 Scientists in China say it’s very unlikely that the oblong Oumuamua asteroid that zipped into our solar system is an alien spacecraft – despite the claims of a controversial Harvard professor to the contrary.

The first known interstellar object to visit our solar system, which is somewhere between 300 and 3,000 feet in length, was first observed in October 2017 by the University of Hawaii’s Pan-STARRS1 telescope and it caused quite a stir.

Astronomers were baffled by it – some said it was a comet and others claimed it was an alien craft or a remnant of a Pluto-like planet.

Harvard physicist Avi Loeb wrote in his 2021 study of the object’s potential origins: ‘Each of these natural-origin models has major quantitative shortcomings, and so the possibility of an artificial origin for Oumuamua must be considered. Oumuamua’s anomalies suggest that it might have been a thin craft – with a large area per unit mass – pushed by the reflection of sunlight.’

A new peer-reviewed study by a group of Chinese scientists analyzes the data we have about Oumuamua to poke holes in Loeb’s claim about how such an alien craft could be moving through space. 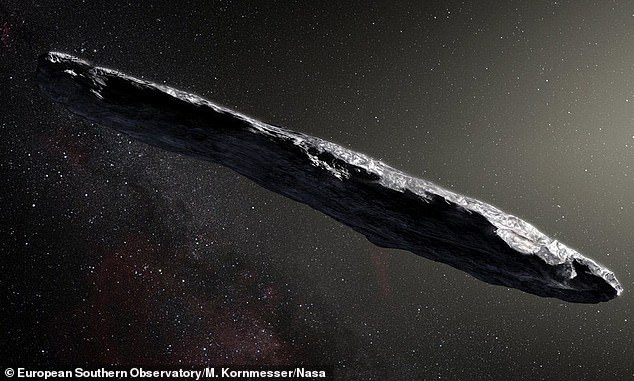 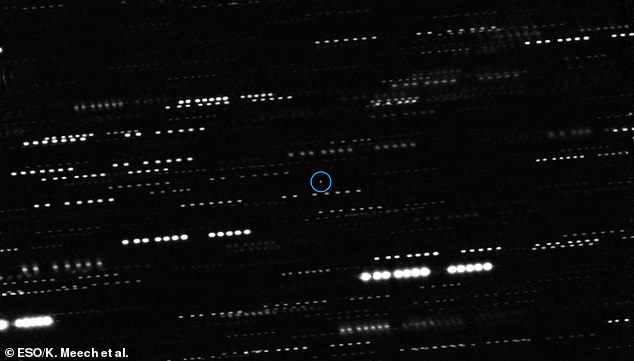 This very deep combined image shows the interstellar asteroid Oumuamua at the center of the picture. It is surrounded by the trails of faint stars that are smeared as the telescopes tracked the moving asteroid

In order for the rocky, cigar-shaped object that zoomed past the sun at 196,000 miles per hour to be an alien ship, it might need to be pushed forward by some type of extremely thin light sail that captures particles from stars. 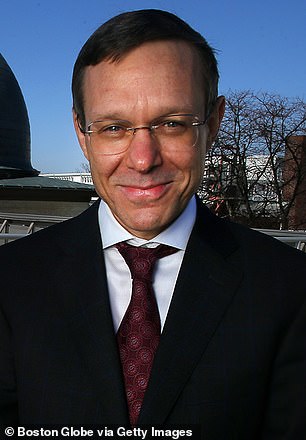 The scientists wrote in their paper that’s been accepted for publication in the journal Astronomy and Astrophysics: ‘The dynamics of an intruding light sail, if it exists, has distinct observational signatures, which can be quantitatively identified and analyzed with our methods in future surveys.’

‘We conclude that the possibility of Oumuamua being a light sail is extremely unlikely,’ Shangfei Liu, an astronomer at Sun Yat-sen University in Zhuhai, China, told The Daily Beast.

Light sails, which are also known as solar sails, use photons – tiny particles of electromagnetic energy – in the way that a sailboat uses wind. If they were part of a spacecraft, they would reflect either a lot of light or only a little.

Shangfei, one of the study’s co-authors, explained to the Daily Beast that Oumuamua should have been very bright at certain points and then basically invisible at others. Although the strangely-shaped object did get brighter and darker, it didn’t get bright enough, he says.

‘If it was a lightsail, the brightness variation should be much larger.’

However, Loeb told the news outlet that the asteroid’s dim appearance could be explained by the shape of the sail – which may be flat or may be more shaped like an umbrella.

Oumuamua could be a spacecraft ‘in other forms,’ Shangfei told the Daily Beast – meaning that it may simply be driven by some other system that doesn’t involve light sails.

Although Oumuamua’s mysterious traits have not been entirely laid to rest by this new paper, scientists hope that future technology – in the form of more powerful telescopes – could help them analyze future objects that could enter our solar system.

Our first interstellar visitor sailed past Earth at at 97,200mph in 2017, but what exactly was Oumuamua?

It was first spotted by a telescope in Hawaii on 19 October, and was observed 34 separate times in the following week.

It is named after the Hawaiian term for ‘scout’ or ‘messenger’ and passed the Earth at about 85 times the distance to the moon.

It was the first interstellar object seen in the solar system, and it baffled astronomers.

Initially, it was thought the object could be a comet.

However, it displays none of the classic behavior expected of comets, such as a dusty, water-ice particle tail.

The asteroid is up to one-quarter mile (400 meters) long and highly-elongated – perhaps 10 times as long as it is wide.

That aspect ratio is greater than that of any asteroid or asteroid observed in our solar system to date.

But the asteroid’s slightly red hue — specifically pale pink — and varying brightness are remarkably similar to objects in our own solar system.

Around the size of the Gherkin skyscraper in London, some astronomers were convinced it was piloted by aliens due to the vast distance the object traveled without being destroyed – and the closeness of its journey past the Earth.

Alien hunters at SETI – the Search for Extra-terrestrial Intelligence based at Berkeley University, California said there was a possibility the rock was ‘an alien artefact’.

But scientists from Queen’s University Belfast took a good look at the object and said it appears to be an asteroid, or ‘planetesimal’ as originally thought.

Researchers believe the cigar-shaped asteroid had a ‘violent past’, after looking at the light bouncing off its surface.

They aren’t exactly sure when the violent collision took place, but they believe the lonely asteroid’s tumbling will continue for at least a billion years.