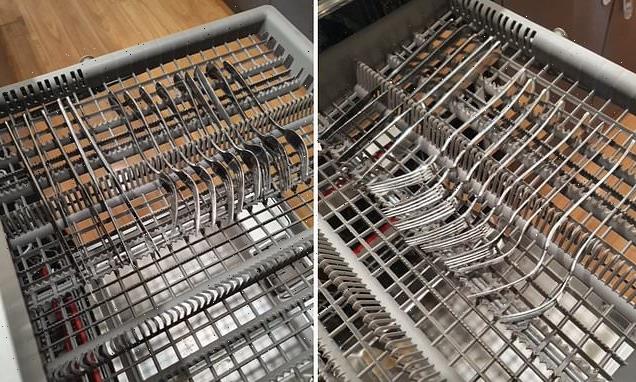 Professional cleaner discovers a ‘mind blowing’ feature in her dishwasher that will change the way you clean your cutlery forever – so did you know?

A professional cleaner has discovered a ‘mind blowing’ feature in her dishwasher for cleaning dirty cutlery.

Liesl Elizabeth, who runs a cleaning service called Clean-Freak Cleaning Co. in Perth, shared a video showing how the knives and forks are laid down in the top rack while loading the dishwasher.

Typically used for long knives, bigger utensils and chopsticks, the mum-of-three was able to stack the cutlery perfectly in between the ridges of the tray.

‘I was today years old… learning the obvious,’ she joked in her TikTok video.

Where do you put your cutlery in the dishwasher?

Where do you put your cutlery in the dishwasher?

With three kids under her roof and a business to run, she said she simply made the video after she was left ‘mind blown’ over the little-known feature.

Her video has since been viewed more than 14,000 times, with many confessing they never knew the slotted section in the top rack was intended for cutlery.

‘I legit didn’t know this and my father-in-law came over and did this… I was baffled,’ one woman wrote, laughing.

One woman said: ‘Is this witchcraft?’ while another wrote: ‘It did seem like a lot of teeth that I didn’t quite understand the purpose for.’

While one added: ‘Oh my god, I feel so dumb’, to which Liesl replied: ‘My too. I’ve had my dishwasher for years but didn’t know cutlery fits in this drawer. I was using it for large knives and lids.’

Many said they knew about the feature, with one saying: ‘People didn’t know this?’ while another added: ‘How else would you do it?’

And another said: ‘It’s literally illustrated in the user manual’, to which Liesl responded: ‘But who has time to read that?’

Some said their dishwasher only comes with a cutlery basket, while others said they don’t have the ‘patience’ to stack smaller items individually in the top rack.

‘It’s so much easier to just throw in the basket,’ one wrote, while another said: ‘I would not have the patience. Just chuck them in.’

Liesl was amused with the response, saying: ‘Trust me, this was for show. There’s no chance I’m doing this every time.’

Earlier this year, CHOICE’s consumer expert Ashley Iredale tackled the question of whether a cutlery basket or a tray was best for cleaning.

‘We’ve found it makes no difference – it comes down to personal preference,’ he said.

‘I’m a basket man. I find loading and unloading each item individually in the tray is a time-consuming chore, and the cutlery tray also reduces the height of other items you can put in the dishwasher.’