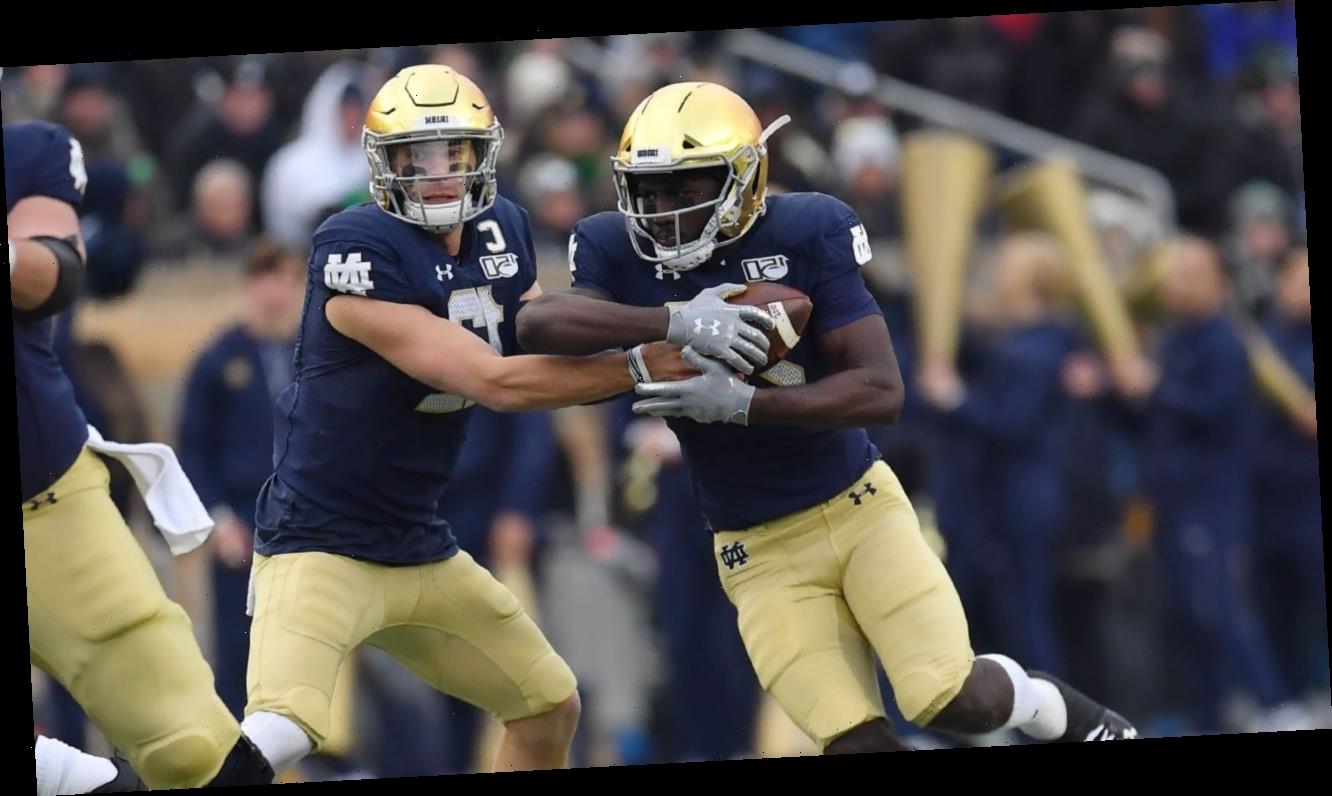 We enter Week 11 of college football with several postponements or cancellations and no ranked teams facing ranked opponents. Teams are 26-14-1 against the spread following postponed/canceled games this season. There are 18 teams still scheduled to play this week that are coming off postponements/cancellations.

AP top-5 teams are 6-17 ATS against unranked opponents this season. Four such matchups were originally scheduled this week, but that is now down to one: No. 2 Notre Dame (-13.5) at Boston College. Also of note, the over is 17-3 in ACC matchups with single-digit spreads this season. Currently, there are four such games in Week 11.

Here are some more tidbits to help you through the weekend of games.

Odds listed are from Caesars Sportsbook by William Hill and subject to change.

• Cincinnati is 45-0 SU in the FBS era when favored by more than 15 points, the best such mark by any FBS team.

• The Hurricanes are 1-11 ATS in games off more than six days’ rest since 2018, including 1-7 ATS in those spots under Manny Diaz.

• This is the fourth instance in the FBS era that the same unranked team has been favored over a ranked opponent in back-to-back games (Virginia Tech was -17 versus Liberty last week). The previous three (2009 Oklahoma, 2007 Arkansas, 2003 Wisconsin) went 0-3 ATS (1-2 SU) in the second game.

• The Hokies are 1-9 ATS in their last 10 games when spread is between -3 and +3, all since the second season under Fuente.

• This would be the sixth time in 37 meetings since the FBS/FCS split that Indiana has been favored over Michigan State (1-4 ATS/SU in previous five). Only once have the Hoosiers been a favorite of more than three points (-7.5 in a 31-0 win 1991). Note that a ranked Indiana team has played an unranked Michigan State team once in the AP poll era (won 14-13 in 1967).

• Indiana is 1-6-1 ATS as a road favorite under Tom Allen, including five straight ATS losses.

• Michigan State has failed to cover five straight games versus AP top-10 teams dating to 2018, tied with Tulane for the longest active streak in FBS.

• With a win, Michigan State can break a tie with Arizona for most outright wins in the FBS era as an unranked team against a top-10 opponent. Both have 14. The Spartans are 14-37 SU, 28-22-1 ATS overall.

• The under is 7-1 in the last eight Michigan State games versus ranked opponents.

• This would be the second game in a row Coastal Carolina is a double-digit favorite against an FBS opponent after two such instances in its first 38 games as an FBS member.

• The Chanticleers won 51-0 versus Georgia State as 3.5-point favorites on Oct. 31. That was the 13th instance since 2004 of a team winning by 50+ as a favorite of fewer than seven points. Those teams have gone a combined 6-14-1 ATS when favored by double digits in their remaining games.

• The Trojans are 0-4 ATS in their last four games as a double-digit underdog since 2019.

• The last time Middle Tennessee was an underdog of at least 20 points versus an opponent outside the Power 5 was October 2014, also against Marshall (lost 49-24 as a 24-point underdog).

• Middle Tennessee has covered four straight games as an underdog.

• Western Carolina is 0-63 outright versus FBS teams with a -32.9 PPG differential.

• The largest favorite Liberty has ever been as an FBS member is -30.5 versus FCS Norfolk State in 2018. The Flames are 7-0 ATS as a double-digit favorite since joining FBS in 2018.

• The Flames are 13-5-1 ATS since Hugh Freeze took over last season.

• South Alabama is playing its second of back-to-back games against ranked opponents and its seventh such game overall since becoming an FBS member in 2012. In the previous six, the Jaguars have never been less than a 17-point underdog (last week versus No. 15 Coastal Carolina). Overall, they are 1-5 SU but 4-1-1 ATS in those spots.

• South Alabama is 7-1-1 ATS in its last nine games as a double-digit underdog.

• Louisiana is 1-5 ATS as a favorite this season, including four straight ATS losses when laying double digits. Its .167 cover percentage as a favorite trails only Memphis (0-3 ATS) for worst in FBS (min. 3 games).

• The under is 6-1 in South Alabama games this season.

• Clemson hangover? Since 2009 (Clemson’s first full season under Dabo Swinney), ranked teams are 10-25 ATS following a game against Clemson (within the same season), including 3-9 ATS as a double-digit favorite.

• Notre Dame has won 28 straight games outright as a favorite, the longest active streak in FBS.

• Boston College has covered five straight games as a home underdog since 2019. Only Kansas State (7) and Iowa State (6) have longer streaks among Power 5 teams.

• This will be the 13th time in 16 conference games since the start of last season that Boston College is an underdog. The Eagles are 10-2 ATS (6-6 SU) in the previous 12, the most such ATS wins in FBS over that span.

• FBS teams that have played at least one game this season are 9-19 ATS when facing an FBS opponent playing its first game, including 3-11 ATS as a favorite. USC played last week, while Arizona had its season opener canceled.

• USC is 3-10-1 ATS as a double-digit favorite since 2017, the Trojans’ second full season under Clay Helton. Only Florida International (2-8 ATS) has a worse such cover percentage over that span (min. 10 games).

• Arizona 4-10-1 ATS in its last 15 games against ranked teams, including 0-2-1 ATS as a double-digit underdog versus ranked opponents under Kevin Sumlin.

• Arkansas has covered eight straight games (3-5 SU) dating to last season (all as an underdog), which is the longest active cover streak in FBS. No other team has more than four straight ATS wins.

• Arkansas is an FBS-best 6-0 ATS this season (all as an underdog), also its best ATS start in the FBS era. If the Razorbacks cover, they would join Ole Miss (2014) as the only SEC teams to start a season 7-0 ATS since the FBS/FCS split in 1978.

• Washington State has covered 10 straight meetings since 2010, tied for the second-longest active cover streak against a single opponent.

• The Cougars have failed to cover five of their last six games against ranked teams.

• This would break SMU’s streak of 10 straight games as a favorite, its longest such streak since at least 1985.

• The Mustangs have failed to cover three straight meetings since 2017.

• Tulsa has never been favored against a ranked opponent in 64 such games since 1978.

• The Golden Hurricane have covered seven straight games versus ranked opponents (1-6 SU with lone win coming this season at No. 11 UCF). That streak tied with Purdue for longest active in FBS.

• Tulsa is 0-4 ATS as a home favorite dating to last season.

• The over is 14-6 in SMU games versus FBS opponents since 2019, trailing only Virginia (14-5) for the most overs in FBS matchups over that span.

• Michigan is 0-10 SU as an underdog under Jim Harbaugh. The Wolverines are the only FBS team without a win as an underdog since Harbaugh took over in 2015.

• Including pre-Harbaugh, the above streak extends to 17 straight outright losses as an underdog, Michigan’s longest since the FBS/FCS split (previous high was six from 2012-13). It’s also the fifth-longest active streak in FBS, keeping some not-so-great company: UConn (26), Akron (19), Texas State (19) and New Mexico (18).

• The over is 18-8 in Michigan games against ranked teams under Harbaugh.

• Dating to their third season under Pat Fitzgerald, the Wildcats are 7-2 outright against Purdue after going 6-22 from 1978-2007.

• Purdue has covered nine straight conference games as an underdog since Jeff Brohm took over in 2017, tied with Ohio State (2009-18) for the longest active streak in FBS.

• The Boilermakers are 15-4 ATS overall as an underdog under Brohm, which includes seven straight covers. That streak trails only Arkansas (8) for the longest active in FBS.

• Purdue is 15-4 ATS against ranked teams since 2014, including 8-1 ATS under Brohm (its seven straight covers versus ranked opponents is tied with Tulsa for the longest active streak).