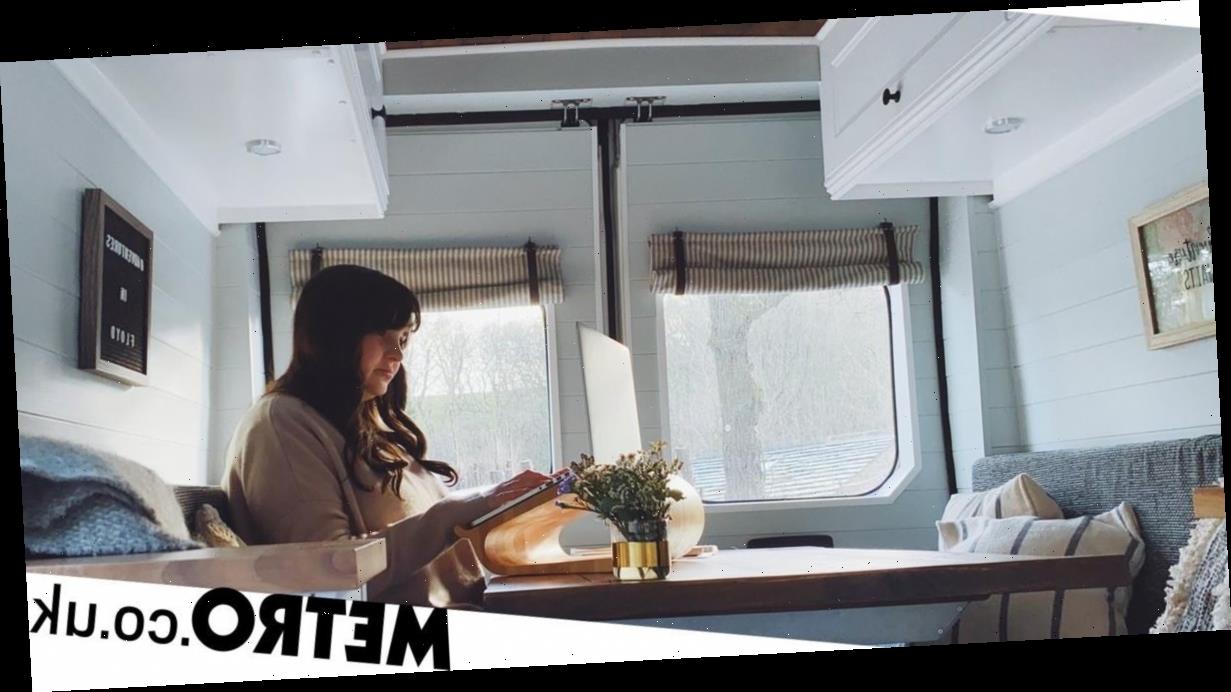 As someone with ADHD, who works from home and has a seven-year-old child, Business Coach Sara Tasker struggles with distraction.

However, she’s recently discovered an ideal solution to help her keep focussed during the working day – a campervan.

While the thought of hiring one as a workspace might seem a bit extreme to some, Sara admits it came from ‘absolute desperation’.

She tells Metro.co.uk: ‘When they announced the latest lockdown, I thought “I can’t do this”.’

Initially, she looked into traditional office spaces, but found they were ‘all horrible, depressing, and expensive’.

That’s when inspiration struck and she decided to hire a campervan to work from, in January.

Since then Sara says her ability to concentrate on work has been much more succesful. ‘There’s nothing else to do in there,’ she explains. ‘I can’t do any housework, all I can do is focus’.

‘My mental health has been really struggling in lockdown,’ she explains. ‘Normally when I feel like that I’d go and work in a cafe, just to feel like I’ve had a change of scenery.

‘Not being able to have that has really taken its toll on me, and the van has replaced that.’

Sara admits that she does feel ‘slight guilt’ over the expense of hiring a campervan. ‘But I remind myself we haven’t had any holidays for the last year, and there’s a lot of money we haven’t spent on eating out,’ she adds.

With no real let up from lockdown, Sara isn’t the only who found it hard to find a way to create separation between ‘work’ and ‘home’.

Making a space for focused tasks (whether that’s in a campervan or a corner at home) is important, perhaps especially so for women.

Extra housework and caring duties have put increased pressure on women in particular, who continue to do a disproportionate share during the pandemic. Meanwhile, according to a McKinsey report ‘women’s jobs are 1.8 times more vulnerable to this crisis than men’s jobs’.

Van hire company Quirky Campers say that it’s not uncommon for people – especially creatives and writers – to hire one to work from, but Covid-19 has provided even more reason.

‘We’ve had a lot of medical professionals, who either were working so many long shifts that it was easier for them just to stay outside the hospital they were working at, or who have been moved to different hospitals, or even people who were shielding from vulnerable members of their families,’ says Lindsay, who works for the company.

She adds that with the prospect of a long winter lockdown, they’ve seen a lot of people turning to campervans as an alternative office space.

‘It’s been a minefield,’ explains Lindsay, as she outlines the rules involved in booking a van, as currently leisure bookings aren’t allowed – although work or accommodation uses may be exempt.

‘Obviously we wouldn’t want people to be going far from home or doing overnight trips. But, she adds,’It’s not just about having a table, it’s about being somewhere that feels enriching and inspiring.’

Consultant Amanda Danells-Bewley says that with her husband unable to work and adult kids back at home during lockdowns, she felt she had to find another place to work in, and her campervan was perfect. ‘It gave me lots of space and time to think,’ she explains.

For Ellen Manning, a freelance journalist, working from one was a revelation: ‘It means removing myself from any household tasks that are so useful for procrastination, like the washing and cleaning.’

Business Psychologist Binna Kandola explains that the appeal of WFC (working from campervan) is not necessarily about having a quiet space, so much as it is about getting separation.

‘Coffee shops are very noisy, but as human beings, we have the wonderful capacity to block out noises that aren’t relevant to us,’ he says.

Explaining the difference when working at home, Bina adds: ‘The noise will be less, but the noises that do happen are important to you, so you pay attention to them, so you get distracted.’

Hiring a van like Sara’s – which has a kitchenette, underfloor heating and electric hookup – costs around £500 a week, and arrives ready to use. However, Lindsay stresses the importance of choosing the right van for your needs – whether that’s heating, the toilet set up or access to wifi.

Of course, not everyone has the resources to hire a camper, but you can still take note from this trend to incorporate a similar concept in your home.

It’s all about creating a dedicated space for work, even if it’s just one side of a table.

Binna adds that he likes to look to research from Nasa – who certainly know a thing or two about living and working in a capsule environment.

‘You need to recognise that the table has many different functions now… it’s a workstation, a dining table, a school desk,’ he says.

Binna also advises using small signals, such as clearing everything away between uses, dressing for business, and switching off email notifications, to create separation between ‘work’ and ‘not work’ in a single space.

For Sara, working from a camper has inspired her to consider its longterm use. ‘It’s made us think that we’re probably going to buy one,’ she says.

And we doubt she’s alone in her thinking.

With these fancy vans offering cheaper, more flexible, and more private alternative to traditional office space solutions, if you’ve got the cash, they’re definitely worth considering – whether that’s for work or (one day) vacay.