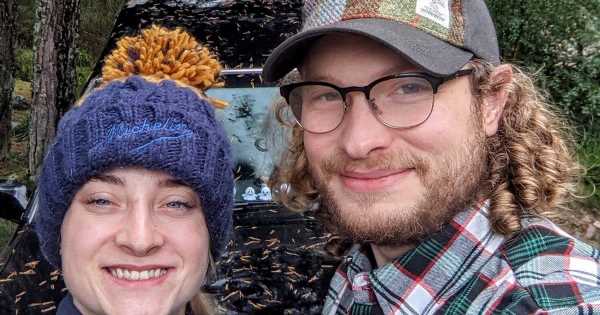 You don’t need plane tickets or a fancy caravan in order to see the sights.

One couple showed how you can have incredible travel experiences no matter which vehicle you’re in – and in their case, it was a HEARSE.

Their eye-catching black vehicle, nicknamed the Grim Sleeper, caused quite the stir when people realised it wasn’t carrying any dead bodies.

So the pair decided to make their own Instagram page to chronicle their adventures in the hearse.

They also want to convert more unusual vehicles and hire them out to other travel fans.

The couple bought the 1998 Volvo 960 Hearse already converted, for £3,500 after seeing it advertised on Facebook.

Their two dogs, Billy and Peanut, joined them on the trip.

Shannon said: "We weren't looking for anything we were originally going to camp whilst on the NC500 but we saw it on Facebook and had to get it, because it was something neither of us had seen before.

"We didn't do any of the conversion we bought it already converted so we can't claim anything for that sadly.

"All we have added up to now is the Halloween figures on the dash, the ducks on the wing mirrors and the skeletons on the front and back.”

Iain works as a mechanic, which offered the pair a bit more reassurance during their holiday.

The couple plan to do more road trips in the future too.

Admin worker Shannon continued: "We are planning to buy more to convert ourselves in the future as well as hiring this one out.

"We plan to use it for all our future road trips, up to now we haven't planned where we are going next.

"But I'm sure it'll attract a lot of attention where ever we go."

It may surprise some that the hearse is no different from a normal car to drive.

But Shannon admits it can be a bit tricky to find parking spaces to fit the long hearse in!

Shannon added: "I think with it being a hearse it puts people of due to its previous passengers but it just works so well as a camper if you can get past that part."