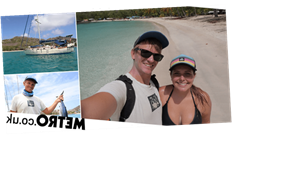 If you’ve ever been on holiday and thought ‘what if I just never went back?’ you’re not alone.

Ryan Osborne, 34, and Elena Manighetti, 33, had that same thought while they were on holiday in May 2016.

But rather than leaving it as a thought, they simply decided they didn’t want to return to their jobs in civil engineering and marketing, and chose to turn their lives around.

The couple said that after Elena had two cancer scares which saw her undergo two operations, and also lost her childhood friend in a car accident in 2016, they realised they wanted to live life to the fullest.

Speaking to Jam Press, they explained, ‘Afew days into our holiday, Elena realised she didn’t want to go back to work. She dreaded going back to work so much, she started wishing she’d break her leg and had to cancel our flights home.

‘So we started discussing options for a way out of the rat race. It suddenly felt like the traditional path in life – be born, go to school, work, get married, buy a house, have children, retire, and die – made no sense at all. Why work all our lives to enjoy some freedom when we’re older, and we’re probably not fit to do the things we love.’

After brainstorming, the pair decided to pursue a life on the sea and returned home to research how they could achieve their new dream.

For the next year, they saved up to buy a 26-foot catamaran moored in Falmouth for £9.5K.

The couple did some repairs to their boat and then departed from England in 2017 to the Algarve, in Portugal.

They sailed on to Sardinia before upgrading to a new boat, Tayana 37, a classic-looking fibreglass sailboat with a canoe stern.

On the new boat, Skua, they sailed from Spain to Greece, and back to Spain in 2019 before sailing from Spain, across the Atlantic Ocean, to the Caribbean in 2020.

But while it may sound as though the pair are living a dream life, their journey has not come without its challenges, including one horrific incident that saw a Coast Guard lose his foot.

They explained, ‘In June 2017, we were in the Isles of Scilly, in Cornwall, three weeks into our new nomadic life, when we read that a big storm was headed our way.

‘We found a protected bay to anchor in and got the boat ready to take on the strong wind. While 60knots of wind raged through the bay, the boats next to us started dragging anchor and were set loose.

‘One of the boats dragged onto some rocks. We didn’t know if anyone was on board, so we called the Coast Guard to ask for assistance. They sent a Life Boat to save the boat and make sure no one was on board.

‘But while trying to lift the boat from the rocks, a volunteer on the Life Boat got his foot trapped in a thick line and sadly lost his foot. To this day, this is the most traumatic and upsetting experience we’ve ever had while sailing.’

They also narrowly missed a potentially fatal collision with a boat that sped towards them with nobody on deck to change course.

‘They were so close, they cut our 20m long fishing line off our stern when they passed us,’ Ryan and Elena said.

‘Had they not changed course, the impact with such a heavy, fast-travelling boat, would have destroyed our boat and killed us both.’

As if that wasn’t enough, in July, Tropical Storm Gonzalo hit the Caribbean, where they were anchored, and the couple had no place to go.

‘We were in Union, an island in Saint Vincent and the Grenadines when we saw a potential tropical storm was going to head our way. At first, we decided to try to dodge the storm by sailing south, waiting it out at sea, and then coming back.

Because borders were closed, however, there was no way to sail elsewhere – and they certainly didn’t want to risk being at sea.

They said: ‘We sailed to the island of Canouan, docked at the local marina, and prepared Skua for a direct hurricane hit. We stripped the decks of everything – all of the sails, shades, our SUP, and more.’

The pair used pool noodles and water hose to keep the boat as watertight as possible, feeling that even if Skua didn’t survive at least they would have been safe on the marina.

Thankfully, however, the storm passed and their boat survived unscathed.

Interestingly, until arriving in the Caribbean, Ryan and Elena were also oblivious to the severity of the coronavirus pandemic sweeping the world.

‘Covid-19 started appearing in the news before we left Lanzarote, but there were no cases where we were, and it seemed the virus was mainly confined to China, where they were locking towns down.

‘When we left, it wasn’t a big thing and it was deemed as not dangerous – it seemed it only affected older people with pre-existing conditions. So when we left Lanzarote, we expected it to have gone away by the time we’d land in the Caribbean.

‘We asked our families not to tell us any bad news, such as someone dying, someone contracting an illness, during our crossing, because once we reached the trade winds, we’d have no way of turning back around, and we’d only be sad and worried for the whole trip.

‘Of course, we didn’t expect a pandemic would break while we were at sea.’

It was only when they came closer to the Caribbean that they were told some islands were closing their borders.

‘When we approached Bequia, the island on which we intended to land, on 25th March, we finally got some reception and we read the shocking news,’ they explained.

‘There were thousands of people dying of Covid-19. Bergamo (Elena’s hometown), was the worst affected in the world, and the UK was going into lockdown. It was a huge shock, and very hard news to digest.’

They have since had to quarantine in Grenada for 14 days but were able to swim around their boat for exercise and to cool off.

The couple – who document their travels on a YouTube channel – continued: ‘Quarantining was fine, but the bay where we were was very “rolly” (when waves come into a bay and make the boat bounce a lot), so it was hard to sleep and cook. We were definitely happy to get our negative COVID test results on day 15.

Despite the challenges they have faced, though, the pair plan on enjoying life on the sea for as long as possible, adding, ‘For now, our sailboat is home. We can’t picture ourselves settling down anywhere in the near future.’