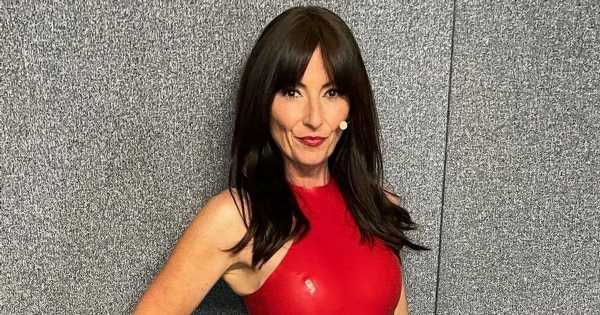 The Masked Singer star Davina McCall put on a rather leggy display for her legion of fans as she promoted her brand new Channel 4 show, Language of Love.

Taking to her Instagram, Davina, 54, showed off her endlessly long legs while wearing a navy blue polka dot dress and black strappy heels.

Smiling radiantly, the former Big Brother presenter flaunted her gorgeously toned physique as she tied her hair in a bun but left a few of her locks loose to form a fringe.

Keeping her makeup light, Davina showed off her natural beauty to fans online while the vivid blue sky made for the perfect backdrop behind her.

Appearing relaxed while leaning on a balcony in Spain, The Masked Singer panellist captioned the photo by paying homage to those who helped her to create the seductive look.

On Monday evening, Davina posted a video on her Instagram account where she explained the details of her new dating show Language of Love.

Sharing the exciting format with her fans, the TV personality expressed that the reality show will have a "bit of an international twist" as the contestants who appear on the programme looking for a relationship won't be able to speak the same language as one another. Although Davina is the host of her show that will hopefully find single hopefuls love, the star recently revealed she has an agreement with her current partner Michael Douglas to not discuss their relationship to the public or the press.

Speaking to Ok! Magazine recently, the presenter said: "We've got an agreement that I don't talk about our relationship, because our exes and kids don't have a right to reply, so it's not fair. "We won't ever talk about us in an interview because somehow words linger and we don't want that.

"The podcast is pretty public, but our relationship isn't, and that will never change because we don't need it to."

Brunette bombshell Davina and celebrity hairdresser Michael, 47, first met when he styled her hair when she was the face of Channel 4's Big Brother.

The couple have both been married before and also had children from their previous relationships.