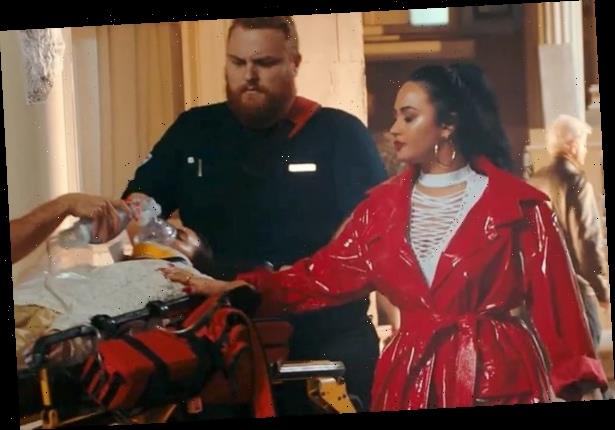 Lovato walks by an ambulance as a girl is being carted in by paramedics on a stretcher.

Demi Lovato is sharing her journey towards self acceptance, self love, and self empowerment in a disarmingly honest and vulnerable new music video for her single, "I Love Me."

The anthem, despite the serious subject matter, is uplifting with a clear emphasis on empowering the listener — and viewer — with a message of self reliance.

Some of the lyrics include: "Oh, why do I compare myself to everyone / And I always got my finger on the self destruct."

"I wonder when I love me is enough," she continues in the video which features her fighting herself in choreographed martial arts sequences, and serves up a cameo from legendary MMA ref Herb Dean.

"Why am I always looking for a ride or die? / ‘Cause mine’s the only heart I’m gonna have for life / After all the times I went and f–ked it up / I wonder when I love me is enough."

Later in the video Lovato walks by an ambulance as a girl is being carted in by paramedics on a stretcher. The singer reaches out and touches the girl reassuringly while singing, "I wonder when I love me is enough." Fans have speculated this moment in the visual is a reference to Lovato’s own nearly fatal overdose in July 2018, after being sober for six years.

The pop star recently talked in depth about her sobriety with Ellen DeGeneres, telling the audience: "I think it’s important that I sit here on this stage and tell you at home or you in the audience or you right here that if you do go through this, you yourself can get through it. You can get to the other side and it may be bumpy, but you are a 10 out of 10, like don’t forget it. And as long as you take the responsibility you can move past it and learn to love yourself the way you deserve to be loved."

You can read more of what she said in her talk with Ellen here.

Another detail from the video that has the singer’s fans cooking up theories are a bride and groom sprinting across a road, which some believe is nod to Demi’s ex Wilmer Valderrama and his engagement to Amanda Pacheco — Wilmer and Lovato dated for six years and broke up in 2016. The former couple have remained close friends, with Wilmer visiting Demi in the hospital as she recovered from her overdose.

"I Love Me" follows Demi debuting her other single this year, "Anyone," at the Grammys.

We Are Crying Over This Major Back to the Future Reunion

Jennifer Lopez Shows Off Every Angle in Sexy White Swimsuit

Inside the Real Housewives of New Jersey Reunion

Kendall Jenner Composes 'A Love Story' in This Barely-There Bikini

All the Stars Doing Their Civic Duty This Super Tuesday

Judge Judy Reveals The Fate of Her Show to Ellen

The Hadids Remind Us That Fashion Week Is Not Over Yet