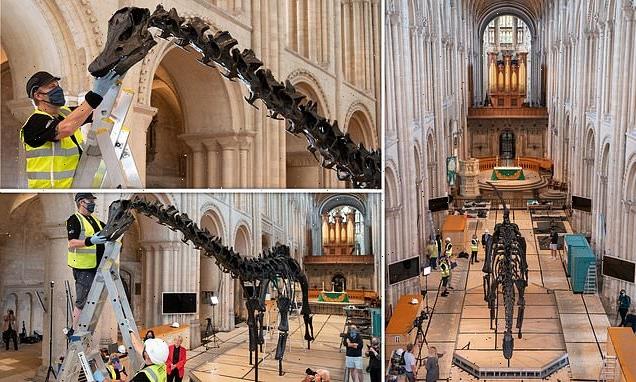 Dippy the ‘people’s dinosaur’ hits Norwich: Natural History Museum’s 85ft-long replica of a diplodocus arrives at Norwich Cathedral on the eighth and final stop of its UK tour

Dippy the dinosaur – the famous 85-foot-long cast of a Diplodocus skeleton – is finally coming to Norwich Cathedral.

Dippy had been undergoing a nationwide tour of eight locations in the UK since 2018, prior to the coronavirus pandemic.

It was due to arrive in Norwich, its eighth and final stint on the ‘tour’ last year, before the virus hit.

Visitors to the 11th century cathedral will be able to admire the cast for free – with no need to book tickets in advance – from July 13 to and October 30 this year.

It’s a plaster cast replica of the original fossilised bones belonging to Dippy, which are on display at Pittsburgh’s Carnegie Museum of Natural History. 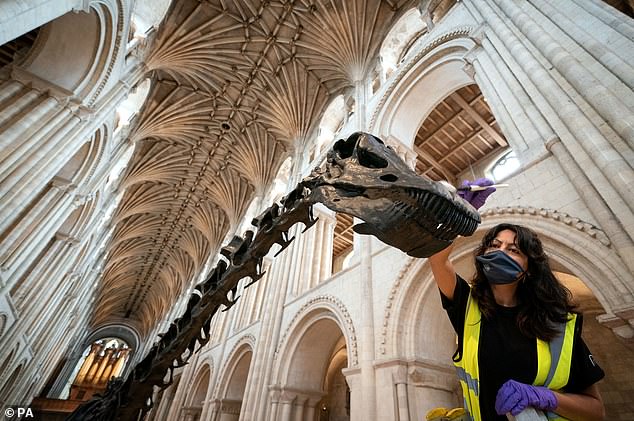 ‘After all this time preparing, it is incredibly exciting to finally have Dippy here,’ said Jane Hedges, Dean of Norwich.

‘It is absolutely fascinating to see the progress of this amazing creature being put together in the nave and we cannot wait to open the Dippy on Tour exhibition next week.

‘We really hope that Dippy’s visit will bring great delight to people of all ages and that it will also spark constructive conversations about the relationship between faith and science.’ 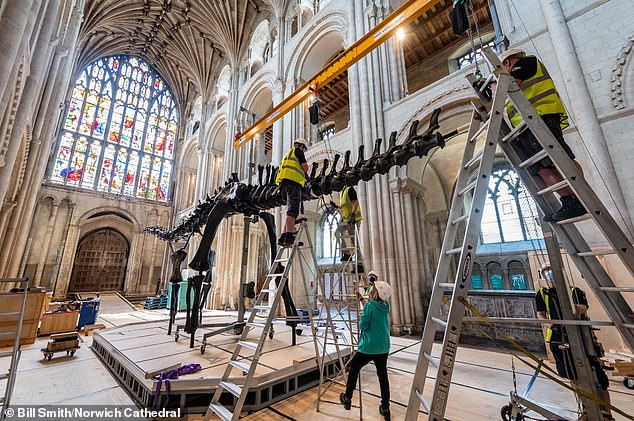 Dippy being built in Norwich Cathedral’s nave. The visit to Norwich marks the first time the dinosaur has ever been displayed inside a cathedral. 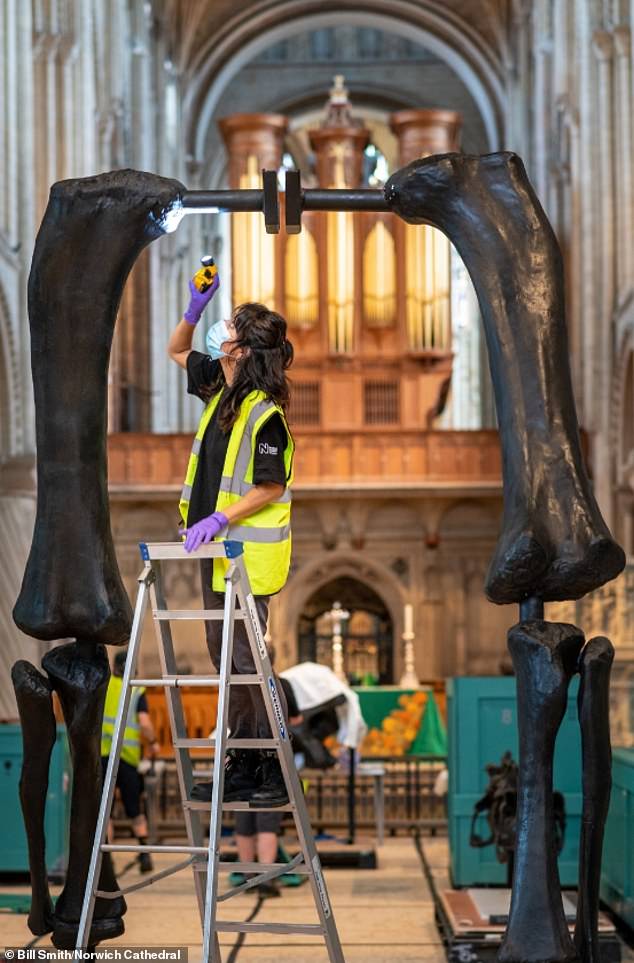 Dippy being built in Norwich Cathedral’s nave. The ‘bones’ of the replica are made of resin and plaster of Paris

The visit to Norwich marks the first time the dinosaur has ever been displayed inside a cathedral.

The cast arrived at the cathedral on Monday July 5, carefully packed up in 16 crates carried by a series of lorries.

Final preparations are underway for the assembly of the cast’s 356 replica bones, which are made of resin and plaster of Paris.

The work is being completed by a specialist team of four technicians and two conservators prior to its unveiling to the public next Tuesday.

The tour marks the first time the ‘people’s dinosaur’ has been publicly displayed outside the Natural History Museum in London, where it had been on show since 1905.

The first stop of the tour in 2018 was Dorset County Museum’s Victorian Hall gallery, before it visited Birmingham, Belfast, Glasgow, Newcastle upon Tyne, Cardiff and Rochdale. 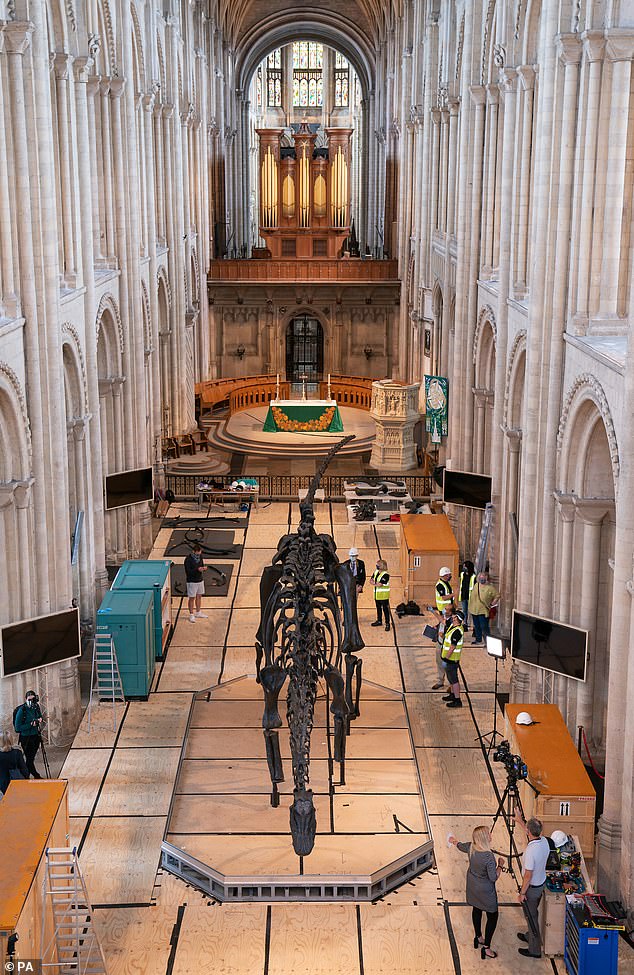 Dippy the Diplodocus, the Natural History Museum’s famous diplodocus skeleton, before going on display to the public at Norwich Cathedral, Norfolk, on July 8 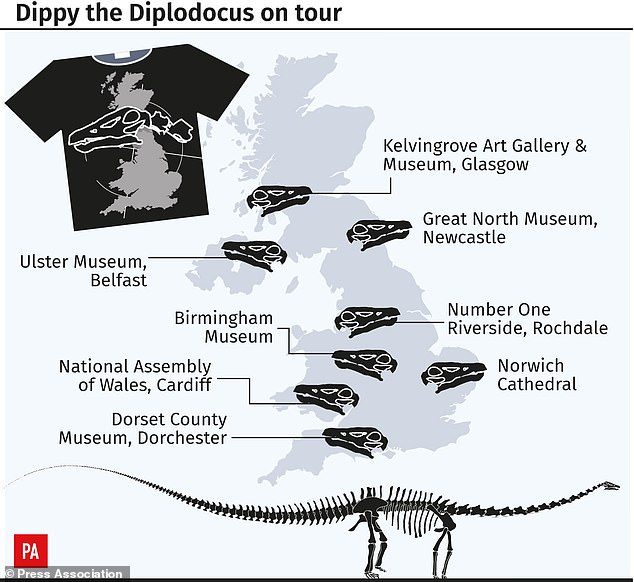 The tour of the UK marks the first time the cast has been publicly displayed outside the Natural History Museum, London

Diplodocus was a long, herbivorous species first described as a new type of dinosaur in 1878 by Professor Othniel C Marsh at Yale University.

The species lived sometime between 156 and 145 million years ago and belongs to a group called sauropods, meaning ‘lizard feet’.

When railroad workers unearthed the original fossilised bones in Wyoming, US, in 1898, newspapers billed the discovery as the ‘most colossal animal ever on Earth’.

This UK cast is one of 10 replicas of the original in museums around the world, including Paris, Berlin, Vienna, and Moscow.

HOW THE DINOSAURS WENT EXTINCT AROUND 66 MILLION YEARS AGO

Dinosaurs ruled and dominated Earth around 66 million years ago, before they suddenly went extinct.

The Cretaceous-Tertiary extinction event is the name given to this mass extinction.

It was believed for many years that the changing climate destroyed the food chain of the huge reptiles.

In the 1980s, paleontologists discovered a layer of iridium.

This is an element that is rare on Earth but is found  in vast quantities in space.

When this was dated, it coincided precisely with when the dinosaurs disappeared from the fossil record.

A decade later, scientists uncovered the massive Chicxulub Crater at the tip of Mexico’s Yucatán Peninsula, which dates to the period in question.

Scientific consensus now says that these two factors are linked and they were both probably caused by an enormous asteroid crashing to Earth.

With the projected size and impact velocity, the collision would have caused an enormous shock-wave and likely triggered seismic activity.

The fallout would have created plumes of ash that likely covered all of the planet and made it impossible for dinosaurs to survive.

Other animals and plant species had a shorter time-span between generations which allowed them to survive.

There are several other theories as to what caused the demise of the famous animals.

One early theory was that small mammals ate dinosaur eggs and another proposes that toxic angiosperms (flowering plants) killed them off.