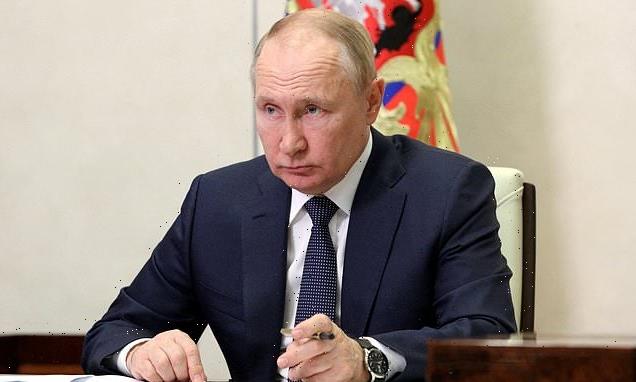 DOMINIC LAWSON: The brutality of little Liza’s death proved beyond doubt that Russia is a rogue state

What a surprise. Little more than 12 hours after Russia signed a UN-authorised deal with Ukraine to lift the blockade of vitally-needed grain exports, in which each side agreed not to ‘undertake any attacks against port facilities engaged in this initiative’, four of Moscow’s Kalibr cruise missiles were launched at Odesa.

The U.S. Secretary of State, Antony Blinken, declared that the attack demonstrated the Kremlin’s ‘disregard for the safety and security of millions of civilians’. Our own Foreign Secretary, Liz Truss, said ‘it shows that not a word the Russian President says can be trusted’.

Both these statements are accurate, but they add nothing to what we already knew. Russia may be a member of the UN Security Council, but it is also a bandit nation — and one should never negotiate with bandits, or not with the expectation that they would honour any agreement.

We might go further and say that, under the leadership of Vladimir Putin, Russia has become a terrorist state. 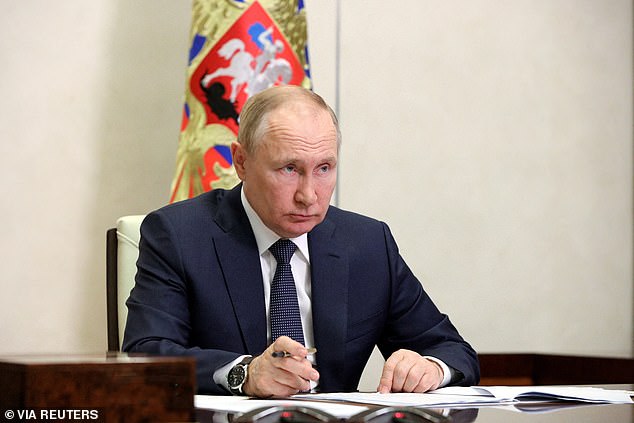 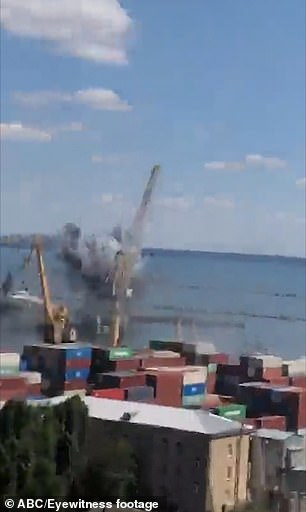 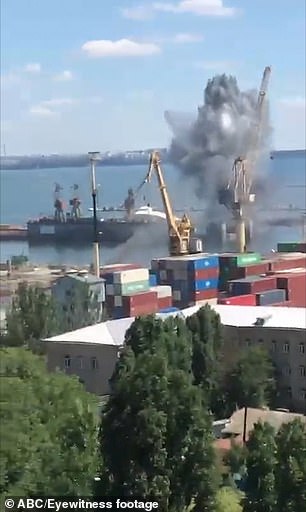 Eyewitness video shows the moment the Russian cruise missile struck the grain processing facility on the banks of the Black Sea. Kyiv said no grain was lost in the attack

This argument was recently set out by Anne Applebaum, the Pulitzer Prize-winning author of a book, Red Famine, on the mass starvation of millions of Ukrainians as an act of policy by Moscow in the 1930s.

She has been in Ukraine and has observed how Russia ‘is directing constant, repetitive, visible terrorist violence against civilians, many of whom are nowhere near the fighting’.

She also points out that, following the revelations of the torture and massacre of hundreds of civilians in Bucha, Putin awarded medals to the brigade that had committed most of the atrocities.

The witness accounts of the depravities committed in Bucha, which emerged in April after the Russians pulled out from that suburb near the capital Kyiv, made a profound impression; they were significant in hardening Western resolve to increase the supply of weapons to the Ukrainians, to prevent further centres of population falling prey to barbarism of this sort.

But sometimes it is the brutal extinguishing of a single life rather than the slaughter of many that makes the biggest impression, and most clearly brings home the human cost of terrorism, which is simultaneously random and deliberate.

That was the effect on me, on learning about the death of Liza Dmitrieva on July 14, in Vinnytsia. On that day, Russia fired seven missiles at this western Ukrainian city, fully 250 miles from the front line of the conflict, and posing no threat whatsoever to the Russian forces in the east of this vast country. Liza Dmitrieva, 4, was killed killed earlier this month by a Russian missile strike in Vinnytsia, Ukraine

One of the guided missiles hit the city’s medical centre.

The 23 victims included a neurologist, Natalia Falshtynska, a mother-of-three, who was working there at the time. Liza Dmitrieva was killed on her walk home back from the centre, where she had gone for speech therapy. She was four years old and had Down’s syndrome.

Her mother, Iryna, had her leg blown off in the missile strike, and remains in a critical condition.

But what tears at the heart is the contents of the phone carried by Iryna and rescued from the site. It had the video she took of Liza only minutes earlier, in which the little girl is talking merrily to her mother, while pushing her own pram — a pram in which she no longer needed to spend much time as she had grown sufficiently strong.

I suppose I was most affected because I am the father of a young woman with Down’s syndrome, and understand how, as a parent, such vulnerability makes one feel so protective — almost painfully so.

Iryna had been overwhelmingly devoted to her daughter and chronicled her life through social media. She revealed how, when her daughter’s condition was detected during the pregnancy, she was told by the medical staff: ‘You are young. Why do you need a sick child?’

But she and her partner ignored the advice to terminate the pregnancy, as she put it: ‘To show Liza the world.’

At seven months, baby Liza underwent heart surgery, and Iryna described watching ‘how our girl was taken out of the operating room and transferred to intensive care. Covered in wires, drips . . . So small and defenceless’. 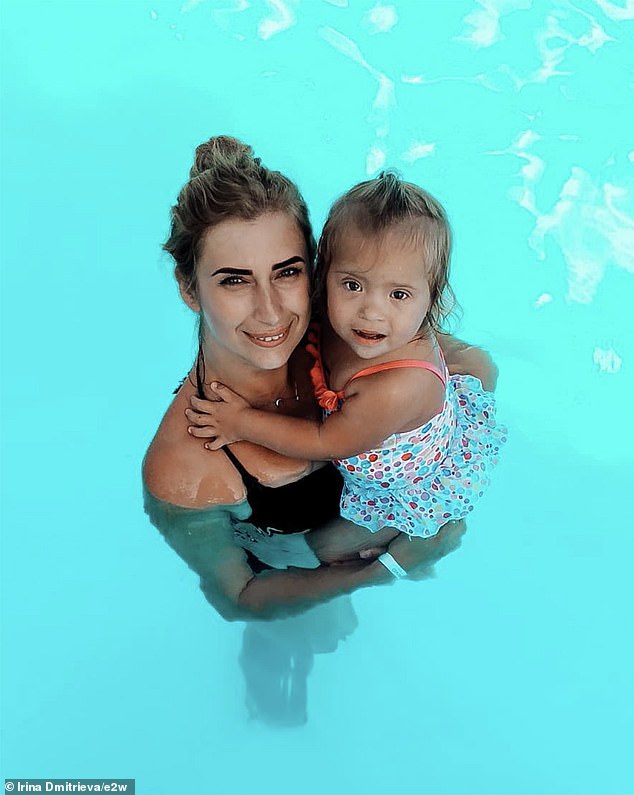 Liza’s mother Irina had her leg blown off in the missile strike, and remains in a critical condition

But it was a success, as the procedure to close ‘the hole in the heart’ almost invariably is nowadays.

In June 2019, Iryna recorded, after her daughter had made great progress in her ability to get up and down from a chair unaided: ‘Only a little thing for some, but for us it’s incredible . . . For us, Liza is a fighter and a hero, a strong little girl whom we love to the point of madness.’

I suspect all parents of such children will recognise that feeling.

Iryna’s devotion, and her chronicling of her little daughter’s life, had made an impact in Ukraine more widely: she was known to Olena Zelenska, the wife of President Volodymyr Zelensky, with whom she had painted Christmas baubles.

After the missile attack on Vinnytsia, and the news about Liza Dmitrieva’s death — made graphically evident by the publication of photos of the child lying dead by her bloodied pram — Zelenska tweeted: ‘Today we were all horrified by a photo of an overturned baby carriage from Vinnytsia. And then, reading the news, I realised that I knew this girl. 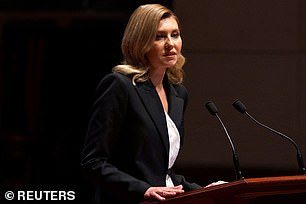 ‘We met while recording a video for Christmas holidays. The little girl managed to paint with dye not only herself, her dress, but all the other children, me, the cameramen and the director just in half an hour . . . Look at her, alive, please.’

It is hardly surprising that the priest conducting Liza’s funeral was unable to control his emotions, even after all he must have seen in his country over the past six months under Russian bombardment.

The description of the child’s father, Artem Dmitriev, staggering and being held up by the shoulders by two relatives, as his daughter was buried, is almost too much to read.

Yet read these accounts we must — and there are countless more innocents who have been slaughtered in the same fashion, as a result of President Putin’s deliberate policy of creating terror in the civilian population.

The reason for this strategy is obvious: and it is not mere spite. Putin hopes it will destroy the morale of the Ukrainian people, and thereby weaken their support for the military resistance to his invasion. But if the Ukrainians are anything like the British during the German Blitz on our cities in 1940 and 1941, the effect will only have been to harden their resolve. 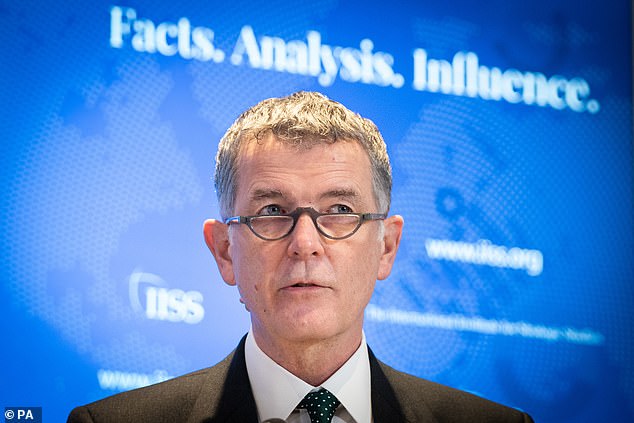 Head of MI6, Richard Moore said Russia had suffered an ‘epic fail’ in Ukraine and that Ukraine could win

And, if the head of Britain’s present-day intelligence service is correct, they should also be reassured in their belief that they can, with the increasing supply of the most up-to-date and formidable weaponry, principally from the U.S. and the UK, push back the invader.

In a very unusual public intervention, the head of MI6, Richard Moore said last week that ‘This is a winnable campaign by the Ukrainians’, adding that Putin had suffered ‘an epic fail’ in Ukraine.

This is a further reason not to negotiate with the terrorist in the Kremlin.

And if you think ‘terrorist’ is an inappropriate term for President Putin, remember that he had approved a lethally radioactive isotope from a Russian state-owned nuclear power station to be unleashed in London (to murder the British citizen Alexander Litvinenko), and a chemical attack on the streets of Salisbury, in the form of Novichok.

That killed only one person, Dawn Sturgess, who picked up the discarded perfume bottle that two FSB agents had used to contain the lethal substance; but the senior national co-ordinator for counter-terrorism, Dean Haydon, told a press conference that ‘the amount of Novichok in that bottle . . . could have killed hundreds if not thousands of people’.

If that doesn’t convince you, talk to the relatives of the Britons murdered when a Russian missile blew Malaysian Airlines Flight MH17 out of the skies above Ukraine in July 2014.

This month, finally, the inquest was held into the deaths of five of them — confirming Russian responsibility.

The remains of the five other British victims have never been repatriated.