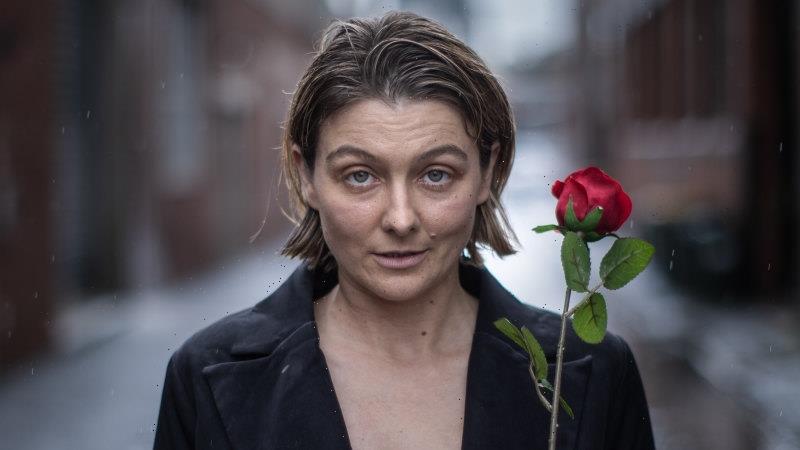 In a pitch-perfect parody of a reality TV moment, a ditzy blonde looks earnestly at the camera.

“So I heard this quote which goes: ‘You die twice, the first time is when they bury you in the grave and the second is the last time that somebody mentions your name’.”

She’s asked who the quote is from. “I heard it in a song by Macklemore,” she replies. 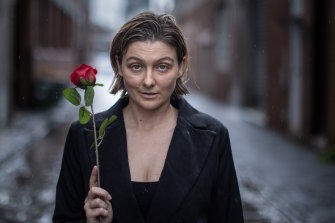 Artist Georgia Banks is inviting a member of the public to volunteer to curate her funeral.Credit:Simon Schluter

Spoiler alert: Macklemore didn’t coin this phrase, and this is no reality TV show. The video is part of a work by Georgia Banks, a Melbourne-based performance artist whose provocative, irony-drenched creations dig into popular culture, self-image and sexuality. 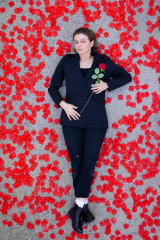 Her latest work, Remains to be Seen, opens April 23 at the Gertrude Glasshouse in Collingwood. She’s created a mock reality TV competition of the same name where the prize is real: the right to curate Banks’ eventual funeral, and decide how to dispose of her dead body.

Weird? Yes. A little bit gruesome? Sure. Is it serious? Well… it’s art.

Over a Brunswick coffee, Banks explains.

Her previous work was a “performance” where she auditioned for reality TV shows for a year. She was down to the last 50 applicants on one popular dating show – which she can’t name.

“They keep you on the hook the whole way through, they’re your best friend and then you get a standardised ‘Dear applicants’ email,” she says. “We’d been texting each other sparkle hearts all through the process.”

Reality TV is the contemporary Colosseum, she says. “It’s where we go to watch people suffer, with no level of social consequence.”

That show was at the Centre for Contemporary Photography in 2020, exploring the arduous audition process and exposing as much of it as she could legally get away with. 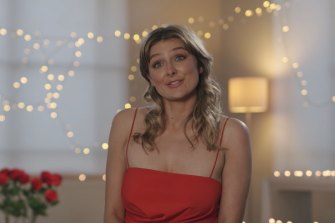 A scene from Remains to be Seen.Credit:Georgia Banks / David Meagher

After that, Banks was thinking about what drives people – including herself – to seek immortality on reality TV, on social media or, indeed, in art.

“And somebody said to me, I guess your funeral is the reality TV show,” she says.

Banks says her work has been about “finding the edges of the possibility of the lived experience”. To go hard, in other words.

So she has created an elaborate framework where her own real-life funeral is the prize. Anyone can enter, through the website remainstobeseen.info, and will go through an audition process that parallels and parodies the TV versions: invasive, personal questions that would usually be about life and loves but will now be about death and dying. 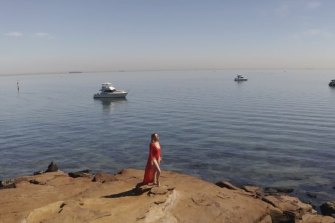 A scene from Remains to be Seen.Credit:Georgia Banks / David Meagher

They include, for example, how they think they will feel when one of their exes dies.

Applications are open from now and, says Banks, “the winner will be announced on the day that I die, and they will get absolute, total, 100 per cent control over everything to do with the disposal of my body and my funeral”.

Absolutely everything. The budget is Banks’ estate.

“I could be liquefied or cremated or turned into a diamond or shot into outer space,” says Banks. “They might only want to invite millionaires, or the directors of all the national [art] galleries.”

It will be up to them. Banks doesn’t even want to know, and won’t ask.

But she gets something in return: the right to their answers to the application questions. And the funeral and its byproducts are a work of art that must carry Banks’ name.

“I’ve decided to take my own death and turn it into a way to never die,” she says. “The goal is immortality, right? Isn’t that what we all want, to not be forgotten?”

And the all-important question, how will she pick the winner?

“Whoever I think will cause the most drama,” she laughs. “Whoever’s ‘not here to make friends’.”