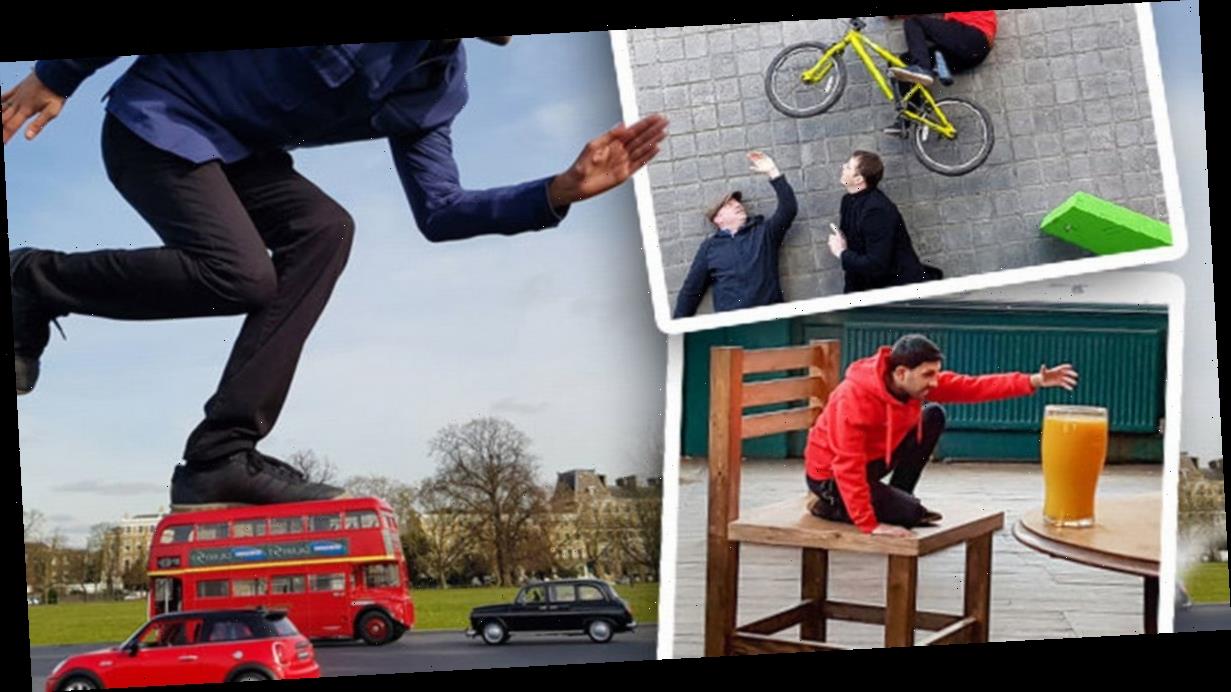 Star magician Dynamo has revealed his ultimate secrets for the very first time.

From floating above the London skyline using an umbrella to shrinking yourself to the size of a pint glass – the series of clever illusions plays with perspective and perception to create a stunning series of shots which the magician insists anyone can achieve.

The Everyday Illusions project uses a mixture of "forced perspective" techniques, combined with everyday items and a handful of simple, easily-made props to create the series of mind-boggling shots.

Each of the images were designed by Dynamo and he's even released a step-by-step guide to achieving similar effects at home.

HERE'S HOW HE DID IT

ILLUSION 1 – GODZILLA – Dynamo appears to tower over a London traffic scene. We created a miniaturised London road with some props to create a forced perspective illusion that really makes you look twice

ILLUSION 2 – THE PUB CHAIR – This illusion uses a simple chair prop. The seat of the chair is actually a separate component which is put further back in the shot which when lined up makes whoever is sitting on it look tiny

ILLUSION 3 – WALL OF WATER – I wanted to try a really cool shot using water, and just by flipping the orientation of the image, I was able to create this incredible image of me walking out of a wall of water.

ILLUSION 4 – THE MATRIX – Creating the illusion that you are standing on a ledge is all about finding the right location, in this case, a concrete bench. The paper aeroplane really adds to the shot casting shadows and confusing the orientation. This shot was caught by using the super-fast focus on the S7 to capture the plane in flight

ILLUSION 5 – BMX JUMP – When I was younger I used to be into BMXing. I’d try loads of crazy scores but I wasn’t that good at it. But using some very clever camera work, you can actually become the ultimate extreme sports star – all you need is your imagination a birds-eye view.

ILLUSION 6 – BOOTS – this is by far the easiest illusion of the set but it’s still brilliantly effective and very easy to create, shooting from a low angle and positioning the boots to line with your feet – simple!

ILLUSION 7 – MARY POPPINS – This shot showcases the super-fast shutter speed of the S7 – if you haven’t guessed already this involves a trampoline a decent stretch of sky and trying to look like you are walking rather than jumping! Having a ‘burst mode’ on your camera phone really helps as one out of 10 shots will achieve the right effect.

BONUS: STAGE FACE – Dynamo shot a final ‘Bonus’ illusion he has called ‘Stage Face’ – onstage during his tour at the Liverpool Echo Arena.

Dynamo, who has captivated millions with his incredible feats on TV series Magician Impossible and is currently on a sell-out arena tour of the UK, said:

Speaking aboy the his illusions Dynamo said: "Ever since I was a child, I have been interested in looking at the world in different ways.â‹ I have always been fascinated by the fact that a simple twist on perspective can completely affect our perception of an image. I wanted to play with this concept for the Everyday Illusions pictures.

"They say magicians should never give away their secrets – but for one time only, I wanted to create a series of illusions that anyone can create and show you exactly how to do it.

"The Images are forced perspective alongside a few simple props to create mind boggling illusions which I believe anyone can achieveâ‹with a little time and imagination."