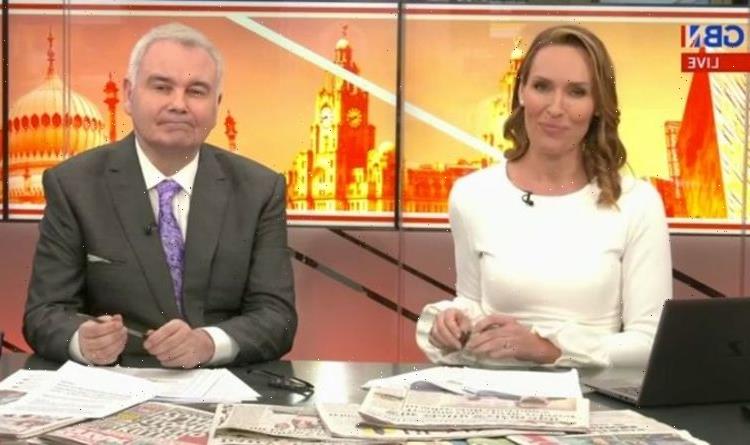 Eamonn Holmes had presented This Morning alongside his wife, Ruth Langsford, for the last 15 years. In 2022, the popular broadcaster will be embarking on a “new era” as he cuts ties with ITV to join the TV channel GB News. But just how big will his salary be?

Eamonn Holmes, 61, is one of the biggest names in TV presenting.

On January 3 he hosted his first breakfast show as part of the GB News team.

Ahead of his first show with GB News, Eamonn said: “My new home, GB News… we will be a work in progress. Basically if you know me, you know what I do and how I do it. Nothing changes.”

He had previously fronted a range of news-based shows such as Sky News Sunrise and GM:TV.

As such a seasoned broadcaster, he will no doubt demand a pricy fee from GB News.

According to the Mirror, his income from presenting both Sky News Sunrise and ITV’s This Morning in 2011 made him the highest-paid TV star of 2011, with a salary of £2.8 million.

His salary may have taken a cut in 2016, as he dropped his hosting duties with Sky to focus solely on This Morning. But this veteran broadcaster will still demand a hefty fee when he joins GB News.

GB News hasn’t released Eamonn’s salary, but it is likely to be into the millions after his departure from This Morning.

Leaving such a highly paid job after a few months may seem strange to many onlookers, but he told the Daily Mail that continuing to work for the channel “would have killed me”.

Eamonn is undoubtedly used to high pay packets as alongside his work for ITV he also presented the drive time show on talkRADIO from January 2018 until 2020.

He also released his popular autobiography, This Is My Life, in 2006, which would have likely been snapped up by his many fans.

On top of his presenter roles, Eamonn also co-owns a lucrative TV production company with his wife, called Red, White and Green.

This added £1.1 million to his vast bank account in 2020, according to reports by the Mirror.

Eamonn’s current net worth is reportedly around the £3 million mark.

Eamonn’s salary may seem extortionate, but the former This Morning host has said “surviving” at the top of the TV industry has been his biggest achievement.

According to the Mirror, he said on Eamonn Mallie: Face to Face with Eamonn Holmes: “The art of television is surviving.

Eamonn has worked his way up to the top of the industry for decades. He originally started his career as a farming reporter on Ulster Television in 1979.

Leaving behind his comfortable job alongside his wife at ITV to move to GB News could be the biggest challenge of his career to date.