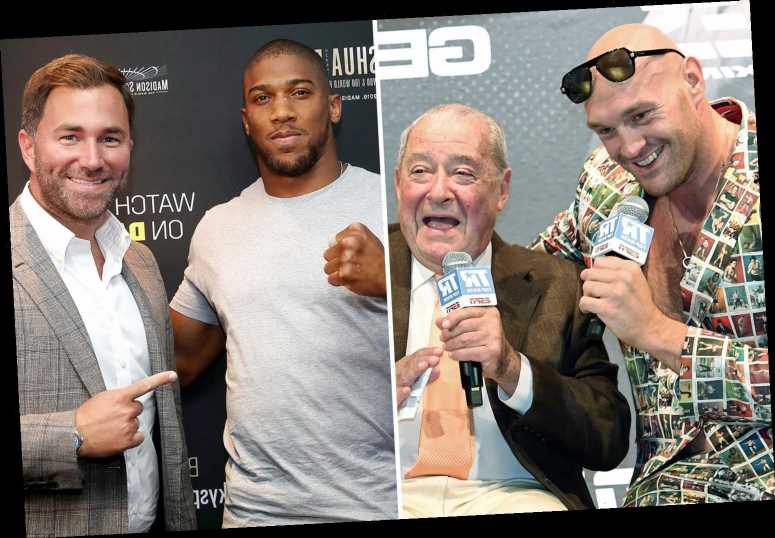 Fury’s US promoter Arum denied claims made by Hearn that they held talks about an undisputed title fight between the two heavyweight champions.

Joshua defends his WBA, IBF and WBO belts against Arum’s fighter Kubrat Pulev in June and Hearn says the two promoters have been in contact since finalising that fight.

But the Matchroom Boxing boss explains while there were no formal contract negotiations, they have discussed terms of how the unification could be agreed between Fury and AJ.

Hearn told iFL TV: Of course I f***ing have [spoken to Bob Arum].

“Firstly, I’ve been negotiating the Pulev fight with him.

“Of course I’ve spoken to Bob Arum. Do you think Bob’s not going to call me and talk about it? This geezer is all over it like a rat up the drain pipe. He was the first one to call me.

“We’ve been talking loads, loads. Listen we haven’t been exchanging contracts, but we’ve had several conversations about Fury-Joshua.”

Fury dethroned Deontay Wilder of the WBC crown at the end of February, but the beaten American has enacted his right for an immediate rematch.

But Hearn still wants to agree terms for Joshua to fight the Gypsy King now – which would be subject to them both winning their interim fights.

The problem is AJ boxes on sports streaming service DAZN in the States, while Fury fights on ESPN pay-per-view – meaning a deal has to be agreed to please both the broadcasters.

“It wasn’t drafting contracts, but it was talk between the two guys for the biggest fight in boxing.

“With us, it’s very simple to get a fight done with AJ. How many people is Tyson Fury paying percentages to? All these people? It’s madness.”