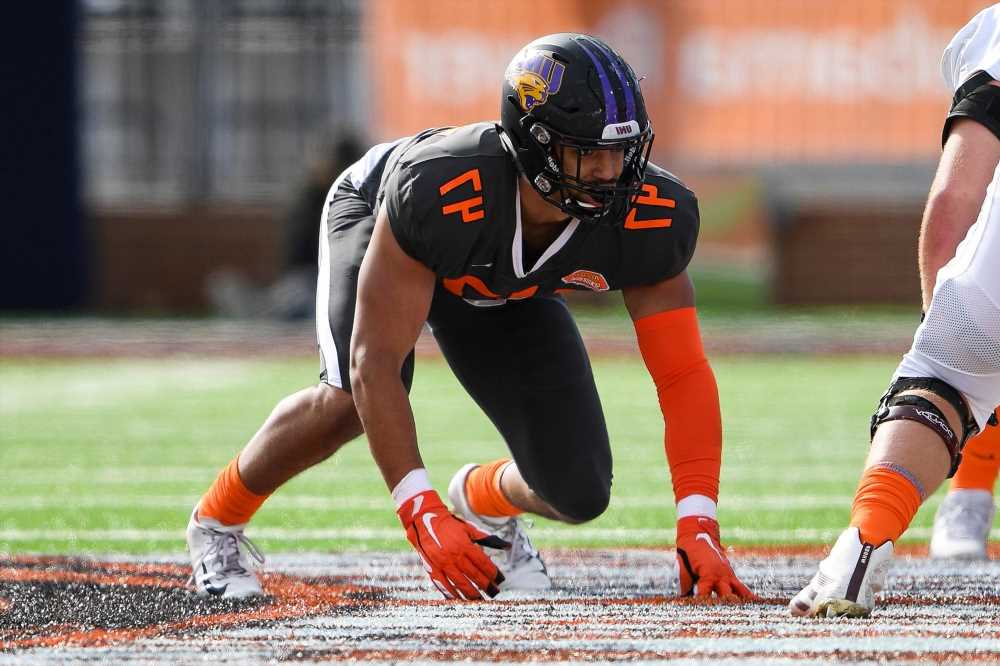 How Giants now stack up in intriguing NFC East

Is the rookie class of edge rushers the Giants added this weekend, Azeez Ojulari and Elerson Smith, finally going to produce what this franchise has lacked for a decade?

The last pass rush demon the Giants found in an NFL draft was Jason Pierre-Paul, way back in 2010. Pierre-Paul just won a Super Bowl with the Buccaneers. Meanwhile, the Giants continue to search for someone remotely worthy of the legacy JPP inherited from Michael Strahan, Osi Umenyiora and Justin Tuck.

Ojulari was a second-round pick, as were Strahan and Umenyiora. Tuck came in the third round, Pierre-Paul in the first. The pipeline has dried up, and the Giants have swung and missed repeatedly, using mid-round selections on college edge guys who never — or as yet have not — developed at the next level.

Damontre Moore in 2013. Owa Odighizuwa in 2015. Avery Moss in 2017. Lorenzo Carter in 2018. Oshane Ximines in 2019. Carter and Ximines are not finished products, coming off injury-shortened 2020 seasons. The others were flameouts with the Giants.

Smith in the fourth round is the sort of shot that too often produced blanks for the Giants. He has everything you want as an athlete — he recorded a vertical jump of 41.5 at his Pro Day, the seventh-highest of any player in this draft. Smith gained 50 pounds the past five years to get up to 262 pounds carried on a long-armed 6-foot-6 frame. He was great (14 sacks) for one year (2019) at a lower level of competition (Northern Iowa), did not play in 2020 and now is tasked with ending the mid-round jinx for Giants pass rush prospects.

“I like to work moves together,’’ Smith said. “I love a good bull-rush. I think my get-off is what starts on my pass rush moves. I like to get offensive linemen off the jump, get their feet moving and really get then scared of my length and my get-off and then from there, depending on what the offensive lineman is giving me, it’s either gonna be a bull rush or I’m going to take the edge or come underneath. I love pass rushing. I have a lot of fun doing it.’’

The Giants would like to join in that fun. Ojulari and Smith join a group that will provide fierce competition this summer. Carter and Ximines are returning from their injuries. Cam Brown and Carter Coughlin are coming off their rookie seasons, veterans Ifeadi Odenigbo and Ryan Anderson were free agent signings.

The Giants went from Smith at No. 116 all the way to No. 196 in the sixth round, as they did not have a fifth round pick (they added one, briefly, on Thursday, before dealing it on Friday), watching as 79 players came off the board. The final two picks were used on a running back, Gary Brightwell of Arizona, and a cornerback, Rodarius Williams of Oklahoma State.

Four of the six members of this draft class are defensive players and none of the six are offensive linemen. Clearly, the Giants did not feel desperate to bolster their line and they did not like the value on the board when those players were available. This does not preclude the Giants from signing offensive linemen as undrafted free agents or waiting out the veteran market to see what shakes out.

The back end of the draft is usually reserved for players with special teams potential, something Brightwell embraced as if he was reading from a script. It is unusual to hear a running back speak so passionately about that often unappreciated part of the game.

“That’s my thing, that’s been my thing since high school,’’ Brightwell said. “I feel special teams, it starts the game and also finishes. Special teams has all the hidden yards. I mean, you need special teams to dominate.’’