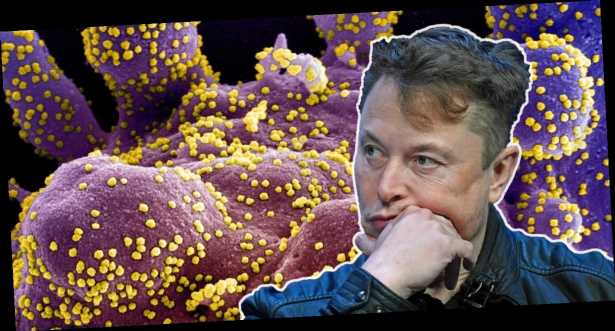 Elon Musk said on Twitter late Thursday evening that he'd tested positive for COVID-19 twice according to a rapid screening.

Musk complained about two negative results from the same rapid test, manufactured by Becton, Dickson, and Company (BD), but said he took more precise tests to confirm his coronavirus infection. Following those tests, he added that he most most likely has "a moderate case" of the disease and that his symptoms feel "just like a regular cold, but more body achy & cloudy head than coughing/sneezing."

The timing of his probable diagnosis is unfortunate.

SpaceX, the rocket company Musk founded in 2002, is scheduled to launch four NASA astronauts into orbit on Sunday night. The flight to the International Space Station will be SpaceX's first operational human spaceflight mission for NASA. The astronauts are slated to spend six months in space, which would also make the mission the longest spaceflight ever to launch from the US.

NASA protocols mean Musk won't be allowed on the premises of Kennedy Space Center in Cape Canaveral, Florida, for the launch of the mission, called Crew-1, officials confirmed during a press conference on Friday. Liftoff is scheduled for 7:27 p.m. ET on Sunday; it was pushed back from Saturday evening due to poor weather conditions.

"NASA and our commercial partners have a health stabilization plan in place," Steve Stich, program manager for NASA's Commercial Crew Program, said on a Friday press call. "If they're compromised, that can jeopardize the mission.

"It doesn't matter if you're Elon Musk or Jim Bridenstine," he continued, referencing the NASA Administrator. "If you have not met those protocols, or if any of those protocols have been compromised, then we're not going to let you near the crew."

Stich added that the Crew-1 astronauts and anyone who'd be making contact with them prior to launch had begun a "soft quarantine" period 21 days before the launch date. During that period, team members reduced their movements and exposure to people outside their immediate families. Then 14 days before launch, the team went into a "hard quarantine" during which they were "totally isolated, and really watched closely by the docs," Stich said.

NASA rules for employees say that anyone with a fever, cough, or positive test result is supposed to "stay or return home and immediately" and be "symptom free" before asking a supervisor to return.

"Your supervisor will consult with the center medical staff to determine when it's safe for you to return to work," NASA's rules say.

Antigen tests are less accurate than other tests

The test Musk initially used — BD's Veritor System for Rapid Detection of SARS-CoV-2 — looks for antigens: bits of protein on or in the virus. The test, according to BD's website, provides results in 15 minutes.

By contrast, PCR tests do a more in-depth scouring for the virus's genetic code, which is why it often takes days to get results. PCR tests "would be pretty close to 100% accurate" if performed correctly, Dr. Emily Volk, an assistant professor of pathology at the University of Texas-Health in San Antonio, told Healthline.

The problem with speeding up the process is that many antigen-based rapid COVID-19 tests may only pick up about 70% to 80% of infections, and they can produce false negatives. The Food and Drug Administration cautions that negative rapid-test results may need to be confirmed with a lab test, and the CDC says the tests are "generally less sensitive than viral tests."

In clinical trials, BD's test had a false-negativity rate of about 16% but delivered zero false positives, according to Fierce Biotech. But the company has since reported several false-positive results from tests done in nursing homes, according to The Wall Street Journal.

Musk tweeted that he was getting a PCR test, the results of which would come back within 24 hours.

'Please isolate while you await the results'

Because of Musk's positive result, he should isolate for the safety of others, according to Dr. Yukari Manabe, an infectious-disease researcher at Johns Hopkins University School of Medicine.

"No test is perfect. Since Mr. Musk was symptomatic and had equivocal results, he should seek a molecular test and self-isolate," Manabe told Business Insider. "Also, he should be screened for other respiratory pathogens."

Angie Rasmussen, a virologist at Columbia University, also emphasized on Twitter that Musk should stay away from others until his PCR test results come back.

"Given that you are symptomatic, please isolate while you await the results of your PCR test, which has a very low false positive rate," Rasmussen tweeted on Friday.

SpaceX did not immediately respond to Business Insider's query about whether Musk will attend the launch.

Bridenstine said NASA may not let Musk attend the launch

"I'll tell you, when somebody tests positive for COVID, here at the Kennedy Space Center and across NASA, it is our policy for that person to quarantine and self isolate," he said. "So we anticipate that that will be taking place."

Bridenstine added that the agency was "looking to SpaceX to do any contact tracing that is appropriate."

This story has been updated with new information. It was originally published at 5:19 p.m. ET on November 13, 2020.

Do you have a story or inside information to share about the space industry? Email Dave Mosher, send him a Twitter direct message, or consider more secure communication options listed here.

Do you have a personal experience with the coronavirus you’d like to share? Or a tip on how your town or community is handling the pandemic? Please email covidtips@businessinsider.com and tell us your story.

Get the latest coronavirus business & economic impact analysis from Business Insider Intelligence on how COVID-19 is affecting industries.