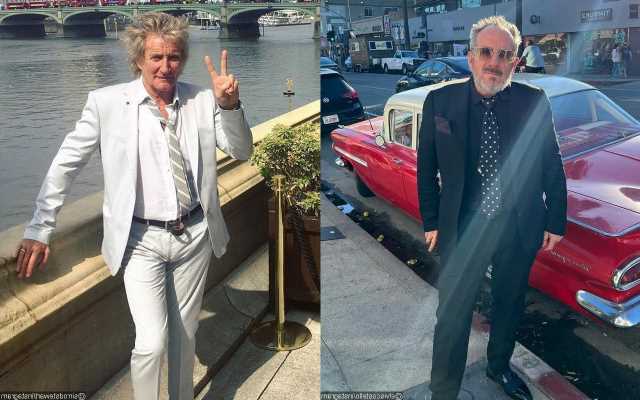 The ‘Don’t Let Me Be Misunderstood’ singer has also set the record straight on his scathing remarks about Diana Ross’ set for Queen Elizabeth II’s Platinum Jubilee concert.

AceShowbiz –Elvis Costello and Rod Stewart appeared to have laughed off their so-called feud. It came after Costello branded the recent Platinum Jubilee concert, which was headlined by Queen, Diana Ross and Elton John, as “s****” and singled out Stewart’s performance of “Sweet Caroline” during a rant despite BBC bosses requesting the song.

Costello reportedly raged to a crowd during a show in Glasgow about the show put on to mark the Queen’s record 70-year reign. “I mean, I know you all love him and he’s one of yours and everything, but Rod,” he allegedly stated. “What the f**k?”

“I must say, listen we all have bad nights vocally, but for f***’s sake, Sweet f**kin Caroline? Are you f**kin kidding me? I mean I’ve been in show business 45 years so I do know a thing or two,” the 67-year-old continued. “How is it that nobody suggested Rod sing ‘You Wear It Well?’ “

Reports of Costello’s outburst prompted Stewart to lash back on Twitter, “Dear Elvis @elviscostello, yes my voice was rough ‘cos of Covid. I apologize, I thought it better it to make an appearance rather than let everyone down so sorry. By the way where’s your hair gone mate????? Sir Rod.”

Costello also reportedly took a dig at Diana Ross’ set, adding, “Listen, Diana Ross had a whole playlist of songs that would have fitted the occasion: ‘You Keep Me Hanging On’, ‘I’m Living In Shame’. I’m not saying ‘Love Child’. You never heard it from me.”

The “Don’t Let Me Be Misunderstood” singer has since backtracked by saying, “If you read my actual remark, it (was) about the wrong-headed idea of asking Sir Rod (to) pass up ‘You Wear It Well’ to lead a f**king singalong.” He also clarified comments on Ross by saying, “Ms. Ross is deity. Have some damn respect. I was joking about the many uncomfortable choices that were overlooked.”

Costello also groveled to Stewart by saying, “Dear Lord Stewart. You know I love you. Think the Queen would have loved ‘You Wear It Well’ or even ‘Hot Legs’. As to gigs, I had a stinker the other night in Liverpool. They come and go, like hair, which I keep sewn in my hat. Up The Republic. Elvis O.rrible B.loody E.erbet.”